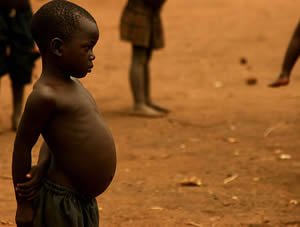 Starvation is a severe involuntary [as opposed to deliberate] deficiency in caloric energy, nutrient, and vitamin intake. It is the most extreme form of malnutrition. In humans, prolonged starvation can cause permanent organ damage and eventually, death. The term inanition refers to the symptoms and effects of starvation.

According to the World Health Organization, hunger is the single gravest threat to the world's public health. The WHO also states that malnutrition is by far the biggest contributor to child mortality, present in half of all cases.

Undernutrition is a contributory factor in the death of 3.1 million children under five every year. Figures on actual starvation are difficult to come by, but according to the Food and Agriculture Organization, the less severe condition of undernourishment currently affects about 842 million people, or about one in eight (12.5%) people in the world population.

The bloated stomach represents a form of malnutrition called kwashiorkor which is caused by insufficient protein despite a sufficient caloric intake. Children are more vulnerable to kwashiorkor whose advanced symptoms include weight loss and muscle wasting.

According to estimates by the Food and Agriculture Organization there were 925 million under- or malnourished people in the world in 2010. This was a decrease from an estimate of 1023 million malnourished people in 2009. In 2007, 923 million people were reported as being undernourished, an increase of 80 million since 1990-92. It has also been recorded that the world already produces enough food to support the world's population.

Not all is gloom, however, in 40 years, the proportion of malnourished people in the developing world has been more than halved. The proportion of starving people has decreased even faster.