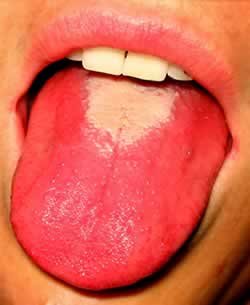 Scarlet fever is a disease caused by exotoxin released by Streptococcus pyogenes.   The term scarlatina may be used interchangeably with scarlet fever, though it can be used to indicate one  less acute form of scarlet fever that appeared at the beginning of the twentieth century.

The symptoms of scarlet fever include the following:

Scarlet fever is  caused by exotoxin released by the bacteria Streptococcus pyogenes.

Once a major cause of death, the infection is now usually cured with a 10-day course of antibiotics, although a drug-resistant strain of scarlet fever has emerged in Hong Kong and China, accounting for at least two deaths in that city - the first such in over a decade. The mutant strain of the bacterium is about 60% resistant to the antibiotics.

Although some of the effects of  vomiting and diarrhea cause dehydration [see separate entry], the principal and primary cause of spiritual experiences is the fever that accompanies the illness – see fever and hyperthermia.