Lowry lived and worked all his life in Manchester and neighbouring Salford, one of the largest industrial communities in the north of England. The industrial revolution in the 19th century brought about a huge population exodus from the countryside into the cities by people seeking work. The massive influx of people forced the labouring classes to live in slums; only the middle class could afford to live out of the city centre and commute.

Overcrowding was a key factor in the spread of diseases such as diphtheria and scarlet fever. The small houses could contain up to ten people, living in unventilated rooms. Between the rows of terraced housing there were open drains and rubbish where children played, and water came from wells that were often polluted. The poor living conditions, long working hours in the mills and low pay all contributed to the general ill-health of the population and the frequent spread of disease. Lowry met such sights every day and they were reflected in his paintings.

The fever van was the colloquial term in the north of England for the ambulance that transported patients with infectious diseases, usually scarlet fever or diphtheria, to the local isolation or infectious diseases hospital. These vehicles were in existence throughout the country from around 1910 to the 1950s and had various nicknames. Helena M Thomas from Rainham in Kent remembers a trip in one in 1918:

‘The Fever Cart was a frequent visitor to Rainham in the early part of the century and although we children held our noses as it went by—many of us became passengers in our turn.... I remember being bundled up in a red blanket and lain head to the front in the little cab. I was probably too ill to notice much of the journey... but I do remember the bumps of what I thought was the horse kicking the cab by my head’.

When Lowry painted The Fever Van his mother, a strong influence on his life, had been an invalid for some years. It is possible that his constant contact with illness at home made him more sensitive to scenes of illness and desperation that he encountered in the squalid industrial communities in which he lived. Did he use his paintings as a way to express grief and desperation?

His disturbing self-portrait Head of a Man painted in 1938, just before his mother's death, suggests that this was so.

The Fever Van, though probably influenced by the artist's state of mind, is based on the realities of the industrial North in the 1930s. From the painting, we gain some inkling of the suffering endured by families touched by the curse of the van. 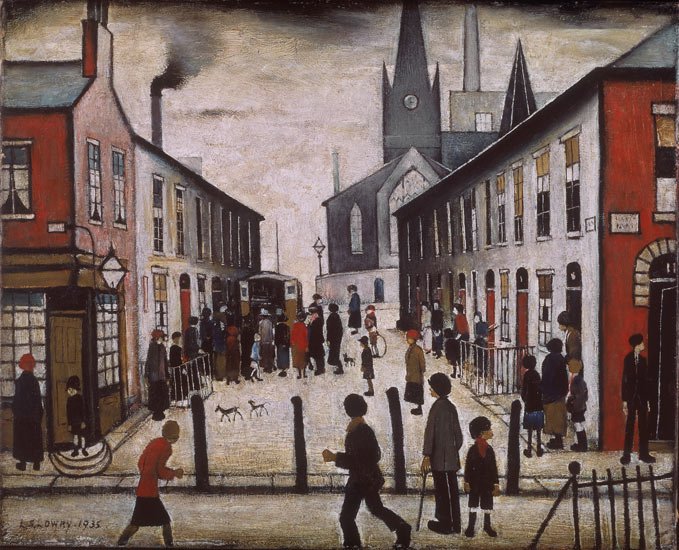