Abortion is “the termination of pregnancy by the removal or expulsion from the uterus of a fetus or embryo before viability”.

An abortion which has occurred spontaneously, is called a miscarriage and is described elsewhere on the site. Abortion is thus defined as termination which has been purposely induced.  An estimated 44 million abortions are performed globally each year.

Abortion, when induced in accordance with local laws and thus under medical supervision, is regarded as a relatively safe procedure and as far as I could ascertain does not produce spiritual experiences.

In contrast, illegal abortions carried out without the benefit of medical help, “result in approximately 70,000 maternal deaths and 5 million hospital admissions per year globally. Although data are imprecise, it is estimated that approximately 20 million unsafe abortions are performed annually."

They have also resulted in spiritual experiences including out of body states.

Only 40% of the world's women have access to legal abortions and laws do not determine abortion rates; in countries where abortions are illegal, the abortion rate is higher, possibly because the same laws restrict access to family planning methods.

Worldwide, 49% of abortions were unsafe in 2008, compared to 44% in 1995. About one in five pregnancies ended in abortion in 2008. The abortion rate was lower in subregions where more women live under liberal abortion laws (p<0·05). The substantial decline in the abortion rate observed earlier has stalled, and the proportion of all abortions that are unsafe has increased. Restrictive abortion laws are not associated with lower abortion rates. PMID: 22264435 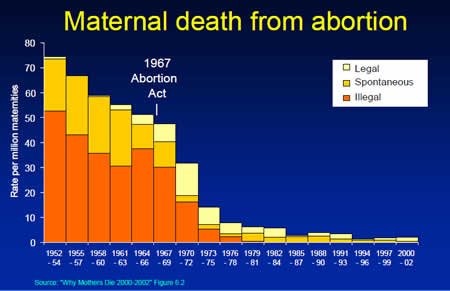 The legality and religious status of abortion vary substantially around the world. Its legality can depend on specific conditions, such as incest, rape, fetal defects, a high risk of disability, socioeconomic factors or the mother's health being at risk.

The legality of abortion is one of the main determinants of its safety. Countries with restrictive abortion laws have significantly higher rates of unsafe abortion compared to those where abortion is legal and available. For example, the 1996 legalization of abortion in South Africa had an immediate positive impact with abortion-related deaths dropping by more than 90%.

There are a number of [sponsored] papers on Pubmed that appear to imply that as abortion causes psychological problems, it should not be made legal [in countries with restrictions] or should be made illegal [in countries where it is legal]. Unfortunately the researchers have ignored what might have happened if the baby had been born. In effect, none of these studies analyses what happens to women who have to give birth to unwanted babies and perhaps what happens to the babies who are unwanted. In effect, their research is only emphasising the need to help stop unwanted pregnancies.

Unsafe abortions remain a major public health problem in countries with very restrictive abortion laws. ...This paper presents the findings from two studies .... in São Paulo State, Brazil. ... respondents were asked ….. whether or not women in general and women they knew who had had an abortion should be punished with prison, as Brazilian law mandates. ….the majority of respondents were against putting women who have had abortions in prison. Almost 60% of civil servants and 25% of medical students knew at least one woman who had had an illegal abortion; 85% of medical students and 83% of civil servants thought this person(s) should not be jailed. PMID: 24315072

Brazil, of course, is a Catholic country.  We also have the following

Abortion in Nigeria is illegal [as of 1990] and carries a heavy jail sentence--up to 14 years imprisonment--unless it is performed to save the life of the pregnant woman. Nevertheless, a large number of clandestine abortions continue to be carried out regularly, often with dire consequences for the lives and health of the women involved. This article reviews abortion legislation in Nigeria...A case is made for ….a new abortion policy in Nigeria in the light of the country's recently adopted population policy. PMID: 2219225

Nigeria is mixed Islamic and Christian [Protestant and Catholic]. 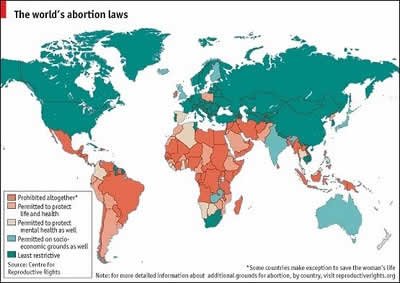 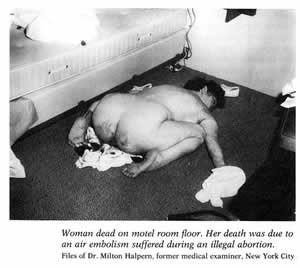 The methods of illegal abortion can be quite horrific involving 'herbal abortifacients', in other words drugs, often very potent ones; the use of 'sharpened tools' – knitting needles were said to be a favourite; very hot baths and physical manipulation or beatings with sticks and paddles; and according to Wikipedia “other traditional methods". They add "Women seeking to terminate their pregnancies ... may attempt to self-abort or rely on another person who does not have proper medical training or access to proper facilities”.

And aside from the appalling pain this can result in, the emotional trauma that results and the overwhelming fear and terror that it produces, it can also lead to severe complications, such as incomplete abortion, sepsis, haemorrhage and considerable loss of blood, and damage to internal organs.  It can leave the person sterile or incapable of bearing any more children.  "Secondary infertility caused by an unsafe abortion affects an estimated 24 million women". 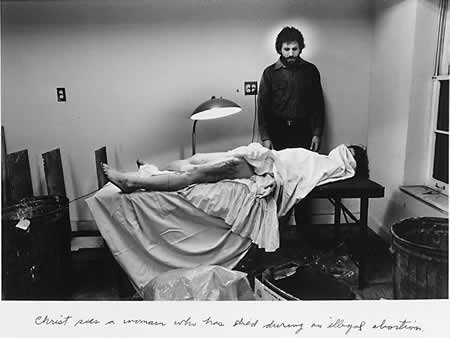 There are two main mechanisms by which this works to give you an experience:

The following is a wonderful documentary When abortion was illegal; untold stories - it is balanced and lets the people who have had to go through this tell their stories