Explosions of all sorts, mining explosions, bombs, nuclear explosions, rocket explosions, accidental explosions such as factory explosions, crashes, even the explosion of volcanoes all create sound and, most notably, infrasound and can produce spiritual experiences ranging from hallucinations – audible as well as visual, to visions and even out of body experiences.

The means by which the spiritual experience is obtained depends on the intensity of the explosion and to a certain extent this depends on the distance of the person from the blast or explosion.

Few explosions have a long duration, so any effect will be quick and almost imperceptible. But there is evidence that it has produced some extremely profound spiritual experiences, especially when, as in the case of bombing, it combines with fear 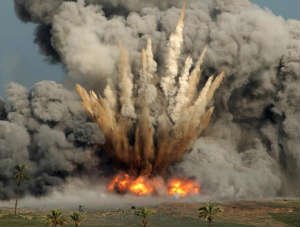 Natural phenomena are prodigious generators of infrasound. The potent distal effects produced when natural explosions occur produce legendary effects. When Krakatoa exploded, windows were shattered hundreds of miles away by the infrasonic wave. Wind was not the causative agent of these occurrences, as no wind was felt or detected. Seismographic stations registered the blast, and barometers measured the shockwaves. The "ringing" of both earth and atmosphere continued for hours. It is believed that infrasound actually formed the upper pitch of this natural volcanic explosion, tones unmeasurably deep forming the actual "central harmonic" of the event. The island of Krakatoa was literally lifted into orbit in the fatal blast. Brilliant sunsets followed for many years thereafter, the sad memorial of all the souls who perished. 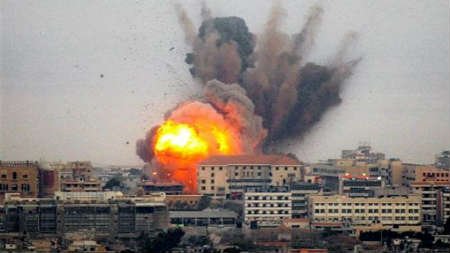 The power of explosives, in shattering and devastating property, lies in two zones. The first zone is that with which we are principally familiar; the actual blast site, where chemically released gases and metal fragments push back everything in their perimeter. The second less familiar zone extends very much further from the blast site than can be imagined. It is in the powerful sonic wave which expands outward that an equally destructive danger lies. Thick pressure walls of incredible momentum, interspaced with equally thick walls of reduced air pressure, travel far away from the blast site. The blast site is the small destructive zone by comparison. Few objects can survive this destructive tide.
Analysts contend that infrasound is composed of a very broad band of pitches. These tones of immense pressure and duration "accommodate" themselves when encountering resonant cavities. All such resonant cavities are "found and destroyed" when the proper pressure waves flow into their resonances. Rooms, halls, alleys, spaces among buildings, courtyard areas, cellars, subways, sewer chambers; all these burst open into flying fragments when infrasonic waves flood them. Infrasound is the cruel tonal giant, tearing open whatever it finds in its path.
Study reveals that the sudden shock wave of an explosion propels a complex infrasonic signal far beyond the shattered perimeter. Incoherent though such shockwaves may be, their destructive influence dissolves distant walls and windows seconds after the shrapnel has done its deadly work.
Objects of all shapes, sizes, and compositions explode when the infrasonic impulse passes through their space. No shield can block infrasound. Physicists have studied the refuse which remains after an explosive charge has been detonated. Few materials can maintain their integrity.

Stimulation usually of high intensity producing resonance of the organs of the brain. Where the person is distant from the explosion the experience may be generated by low intensity infrasound. 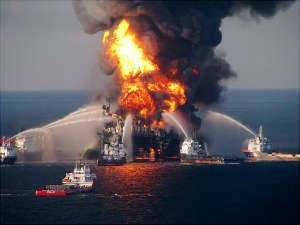