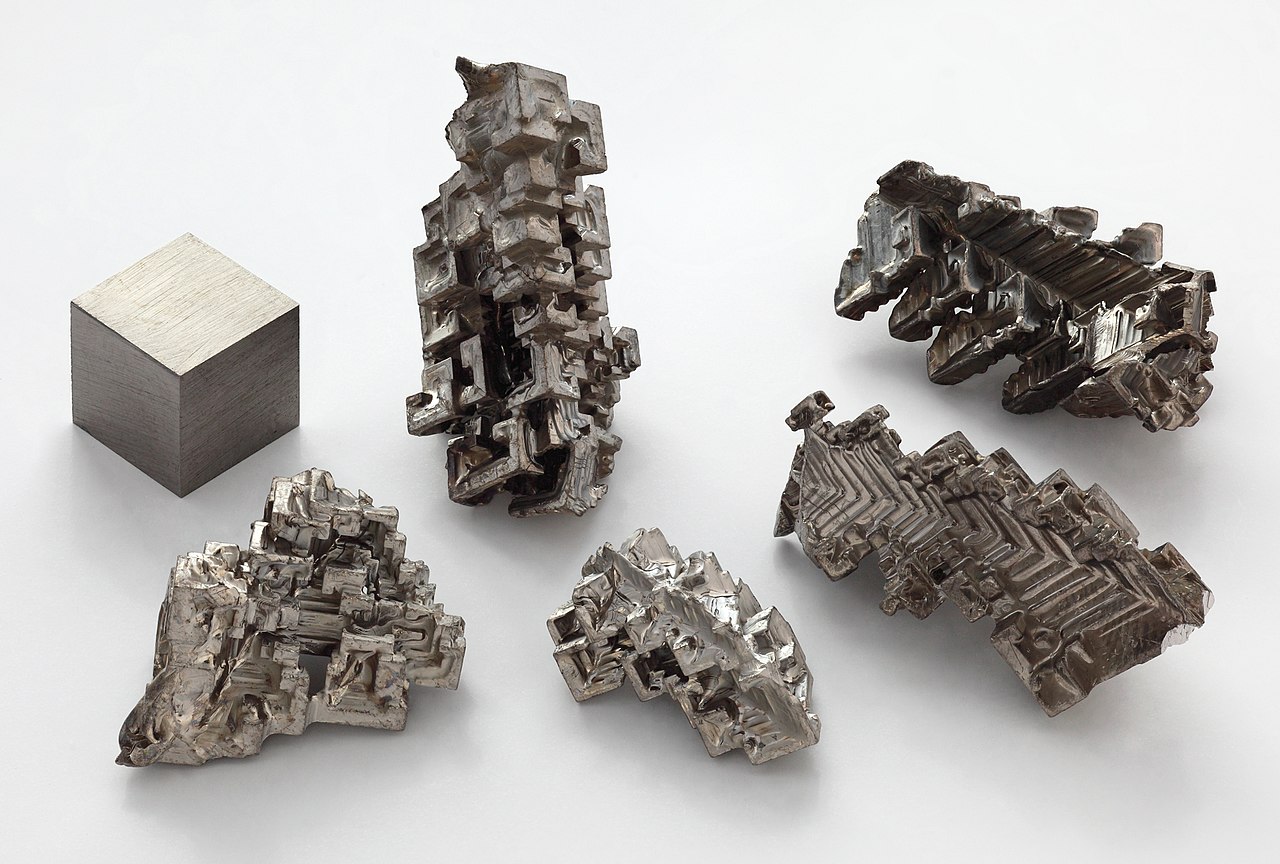 Bismuth is a chemical element with the symbol Bi and atomic number 83. It is a 'pentavalent post-transition metal' and is a brittle metal with a white, silver-pink hue, often with an iridescent oxide tarnish showing many colours from yellow to blue. The spiral, stair-stepped structure of bismuth crystals is the result of a higher growth rate around the outside edges than on the inside edges. The variations in the thickness of the oxide layer that forms on the surface of the crystal cause different wavelengths of light to interfere upon reflection, thus displaying a rainbow of colours.

Elemental bismuth may occur naturally, although its sulfide and oxide form important commercial ores.  In the Earth's crust, bismuth is about twice as abundant as gold. The most important ores of bismuth are bismuthinite and bismite. Native bismuth is known from Australia, Bolivia, and China. 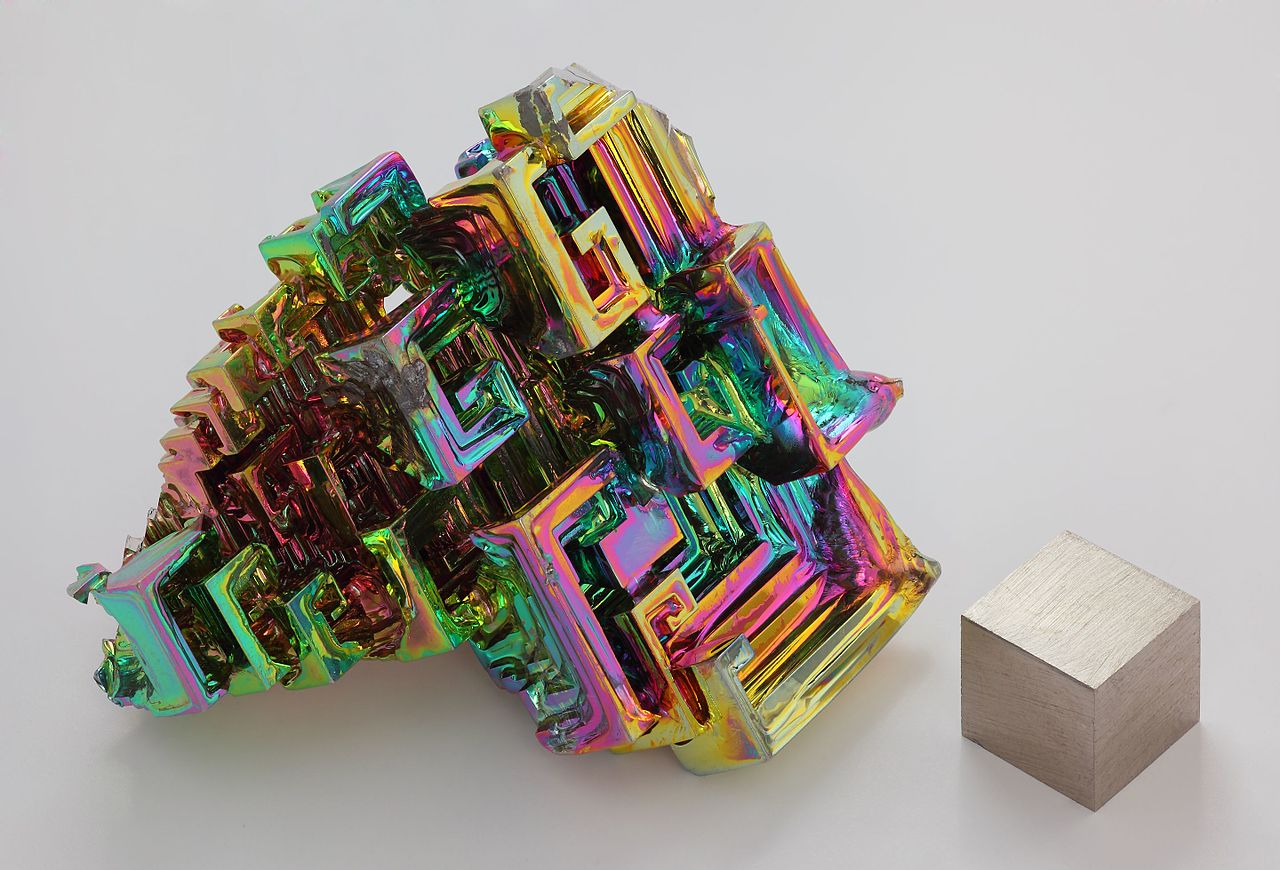 The unusual properties of Bismuth have led to many of its uses.  The free element, for example, is 86% as dense as lead.  When deposited in sufficiently thin layers on a substrate, bismuth is a semiconductor, despite being a post-transition metal.  Bismuth was long considered the element with the highest atomic mass that is stable, but in 2003 it was discovered to be extremely weakly radioactive.

As a consequence, Bismuth is used as a replacement for lead in ceramic glazes, fishing sinkers, food-processing equipment, free-machining brasses for plumbing applications, lubricating greases, and shot for waterfowl hunting.  Compounds are to be found in paints (bismuth vanadate - an opaque yellow pigment used by some artists' oil, acrylic, and watercolor paint companies), and  pearlescent cosmetics (bismuth oxychloride), and bismuth-containing bullets.  Bismuth compounds account for about half the production of bismuth. 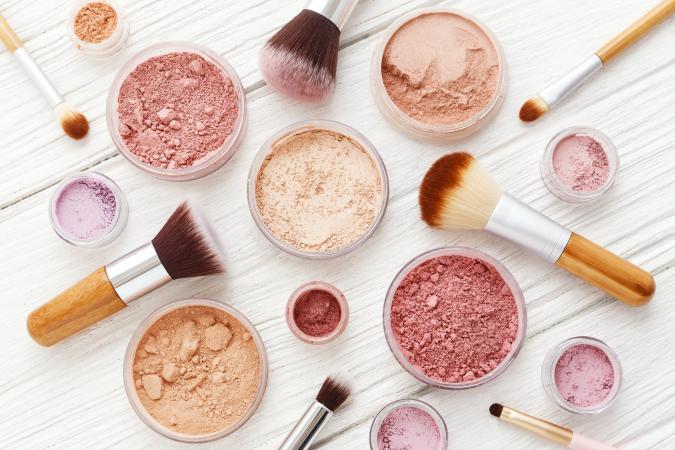 Bismuth telluride, for example, is a semiconductor and an excellent thermoelectric material Bi2Te3 diodes are used in mobile refrigerators, CPU coolers, and as detectors in infrared spectrophotometers.  Bismuth germanate is a scintillator, widely used in X-ray and gamma ray detectors.  It is even used in ‘crackling microstars’ (dragon's eggs) in pyrotechnics.

But bismuth is also used in a few pharmaceuticals, notably bismuth subsalicylate, - known as Pepto Bismuth and here lie some of the problems.

As long ago as 1976, researchers were warning of the dangers of Bismuth poisoning

Bismuth encephalopathy, characterized by the constant association of acute confusion, myoclonus, severe ataxia and dysarthia has reached "epidemic" proportion since its first description in 1974. The clinical aspects the pathogenic hypothesis, the diagnostic criteria as well as the report of a typical case are described by the authors, who stress the similarities with encephalopathies induced by other metals. PMID: 1007897

Alarmingly it is used in medicines and cosmetics and there are quite a number of case reports on PubMed of people who have been very ill using these products, suffering mental effects, including hallucinations, and death. 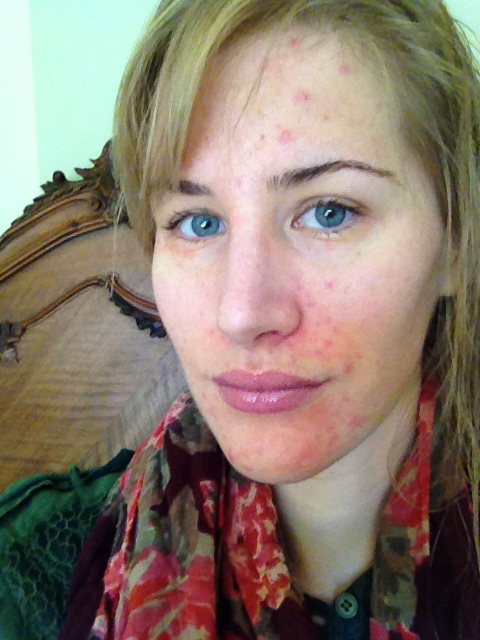 ……… A number of toxic effects have been attributed to bismuth compounds in humans: nephropathy, encephalopathy, osteoarthropathy, gingivitis, stomatitis and colitis. Whether hepatitis is a side effect, however, is [not proven]. Each of these adverse effects is associated with certain bismuth compounds. Bismuth encephalopathy occurred in France as an epidemic of toxicity and was associated with the intake of inorganic salts including bismuth subnitrate, subcarbonate and subgallate. In the prodromal phase patients developed problems in walking, standing or writing, deterioration of memory, changes in behaviour, insomnia and muscle cramps, together with several psychiatric symptoms. The manifest phase started abruptly and was characterised by changes in awareness, myoclonia, astasia and/or abasia and dysarthria. Patients recovered spontaneously after discontinuation of bismuth.  PMID:  2682129

Poisoning from Medicinal use

Bismuth is an ingredient in some pharmaceuticals, although the use of some of these substances is declining.

Bismuth subnitrate (Bi5O(OH)9(NO3)4) and bismuth subcarbonate (Bi2O2(CO3)) are also used in medicine.  Tritec a pharmaceutical that consists of a ranitidine/bismuth citrate combination had the following side effects according to the eHealthme website:

Despite the known dangers there were still researchers recommending the use of Bismuth only 20 or so years ago.

To asses a novel  [sic] 1-week regimen consisting of bismuth, clarithromycin and a proton pump inhibitor in routine clinical practice.

Despite the 24% who were really ill on this ‘novel’ regimen, the researcher still concluded that [and I quote] “A 1-week course of triple therapy including bismuth, clarithromycin and a proton pump inhibitor is effective in routine clinical practice and is well tolerated”.

Poisoning from Cosmetics and artists paints 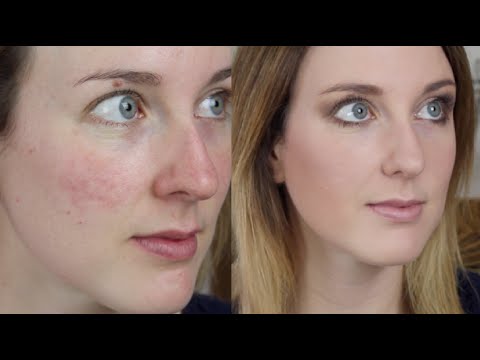 Bismuth oxychloride (BiOCl) is sometimes used in cosmetics, as a pigment in eye shadows, hair sprays and nail polishes.  This compound is found as the mineral bismoclite and in crystal form contains layers of atoms that refract light chromatically, resulting in an iridescent appearance similar to nacre of pearl. It was used as a cosmetic in ancient Egypt. Bismuth white (also "Spanish white") can refer to either bismuth oxychloride or bismuth oxynitrate (BiONO3), when used as a white pigment. The problem seems to be that the nanoparticles [tiny particles] found in cosmetics and artist’s paints can be absorbed through the skin and enter the body.  If found in lipsticks they can also be ingested, where research seems to show they are cancerous. 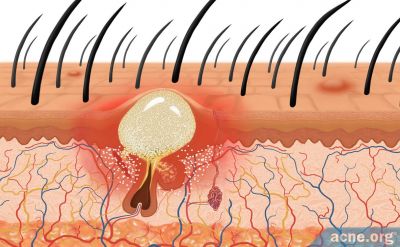 We described the toxicity of Bi on the kidney that seemed to be relatively known by researchers, while the mechanisms remain unclear.
Recently, our group has found that Bi compounds, including bismuth nitrate (BN) and Bi nanomaterials, can induce autophagy in kidney cells.
We also extended our findings by selecting five Bi compounds, and the results showed that BN, bismuth oxychloride, bismuth citrate, colloidal bismuth subcitrate, and Bi nanomaterials all induced slight cytotoxicity accompanied with autophagy.
Although the role of autophagy in Bi-induced cytotoxicity and kidney injury is under investigation by us, autophagy may help with the exploration of the mechanisms of nephrotoxicity by Bi.  PMID:  29506455

Bismuth's environmental impacts are not well studied or known and is currently an area of active research.  There is recognition that Bismuth can enter the food chain and thereby cause illness 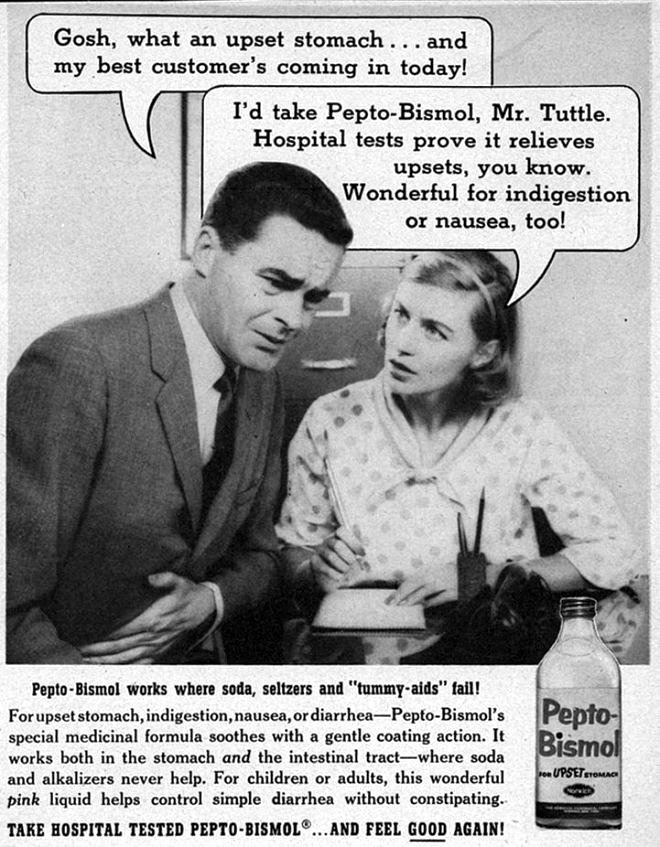 Many of mushrooms species from the forest area of Bucegi Mountains are consumed by the native population without thinking about the heavy metals uptake in the human body. From all the edible species we choose eight mushrooms, part of them considered edible and part with uncertain edibility. Heavy metals concentration in the fruiting body of mushrooms are different from one species to another and shows mean values of

The bioconversion factor of heavy metals represent the level of metals concentration in the mushrooms body correlated with the metallic element in the soil on which the fungus growth, and has the highest values in Marasmius oreades species for bismuth and titanium.