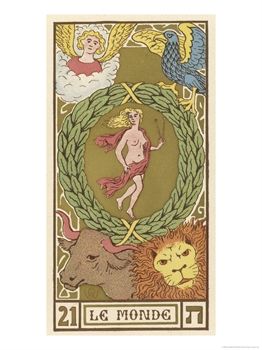 Reality which this action creates, is not limited to what comes within our senses. These senses are instruments adapted not to the real World, but only to the deceptive materialism of the poor sublunar world in the illusory dusk from which we struggle. Of what exists we see only the dying surface, made up of cinders about to harden and become relatively immobile in an apparent and illusory materialization. We are ignorant of the living essence of things and our conceptions suffer because of it.

If we were better instructed, we would envisage the Real in more refined terms. The World is swirling in a perpetual dance where nothing stops; everything turns ceaselessly in it, for movement is the generator of things.

This concept which the most modern science does not reject, goes back to prehistoric times in as much as the veneration attached to the swastika will allow us to judge. For that is what this cross is known as, with its branches bent into right angles or curved into a hook

.. This emblem, taken over today by the advocates of pan-Germanism, is found everywhere on monuments and objects of wondrous antiquity. It is related to the movements of the sky, a movement which, in the eyes of our distant ancestors, was communicated to persons and things, animating some and moving others. From this movement flowed life, which in earlier times had been thought to be divine.

The Tarot was inspired by these ideas many thousands of years ago when it shows us the Goddess of Life running, enclosed within a garland of green, like a squirrel who makes his cage turn round. In this sweet divinity we recognize the young naked girl of arcana 17, but who this time is modestly veiled in a light drapery of red, the colour of activity, Because of her incessant running this indefatigable Atlanta remains fixed and still in the heart of this giddy giration which she keeps going. Hence her attitude reminds us less distinctly, it is true, than the Emperor's (4), of the sign of sulphur ~, for her head and her arms outline a triangle, beneath which the left leg raised behind the right, indicates the cross. Thus the agile and animating Goddess of the World is related to the central fire which burns without respite in its fixed abode.

Pluto (arcana 4) could be her father, although there is nothing infernal in her aspect. She is the corporal soul of the universe, the Vestal Virgin of the hearth of life whose fire burns in every person. This role explains the two wands which the sulphureous maiden holds in her left hand.

They have round knobs at the end, of which one is red and the other blue. With the first fiery energies are picked up, which will be associated with the life-giving fire which would die out if it were not constantly revived by the breath of air which the blue knob attracts. When the energies are picked up they are passed with the right hand to the red veil that she is holding……..

The life-giving circle which encloses all things is seen in arcana 21 as an oval garland with three rows of green leaves held together at the top and bottom by golden ribbons.  The Italians adorn this crown with four roses arranged in the form of a cross. These flowers embellish and spiritualize life, thanks to the breath of the regenerating spirit (arcana 20) which becomes manifest in life itself (4 x 5=20). Their sweet perfume charms souls and exalts their noble ardour, at the same time drawing them away from violence and ferocity. The rose befits the knights who put their strength and unshakable courage at the service of an ideal of pure love.

The cosmogonic quaternary of religious tradition in arcana 21 receives a holy representation.

What distinguishes the wise man is the fact that he has no illusion about the false reality to which our senses are prey.

Everything becomes spirit in face of his spiritual view of life. The World appears to him like the miracle of the Single Thing of the Hermetists. By conceiving the radical Unity or oneness of what exists, we rise to Gnosis, the supreme reward given to efforts made in search of the true. This direct knowledge and understanding (Gnosis) is found in the intellectual ecstasy inspired by contemplation of the sanctuary of which the Priestess (2) holds the keys. No one enters the Temple where the pure light of the Spirit shines; but when matter dissolves in the face of our mental perception, then no obstacle stands in the way of our complete illumination. When we are penetrated with Divine Light, raised for ever from our fall, we become full of enlightenment and we thus complete the cycle of our regeneration...............