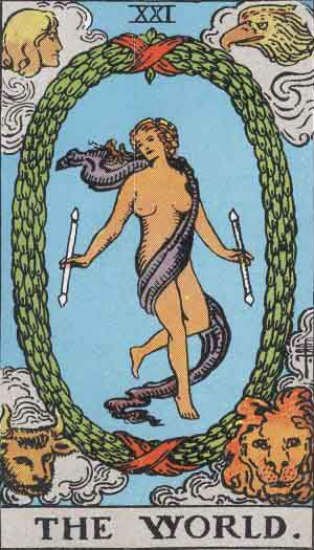 The World (XXI) is a trump or Major Arcana card in the tarot deck. It is usually the final card of the Major Arcana or tarot trump sequence.

In most cards it shows a naked woman who dances above the Earth holding a staff in each hand, surrounded by a green wreath, and in here we see the main symbolism of the card, as If you are given a wreath it is a symbol of having achieved your destiny.  Furthermore the use of green is associated with Spring and new growth and as such be a symbol of the final stage on the spiritual path.

Around the edge of the pack are various creatures. In older decks, these are usually a  lion and an ox, which to be symbolically correct should be at the bottom.  These denote the taming of the Intellect and thus supremacy of the feminine over the masculine and an opening to your Higher spirit - the lion has become an ox!  At the top is shown the  eagle and a head, which is supposed to represent the Higher spirit.  To really make things confusing for you, the crown chakra has been opened, the energy fully balanced and you are in permanent touch with your Higher spirit - the eagle flies!

The four figures in the corners of the card are referenced in the Book of Revelation, 4:7: "And the first beast was like a lion, and the second beast like a calf, and the third beast had a face as a man, and the fourth beast was like a flying eagle."  But this only serves to show the consistency of the symbolism.

In some decks the wreath is an ouroborous biting its own tail.  This symbolism is not inconsistent with the other symbolism as it is intended to show the fact that once everything is in balance there is continual and balanced Energy recycling.

In the Thoth Tarot designed by Aleister Crowley, this card is called "The Universe."  Most people are happy at this stage to know the world is their oyster, Crowley being a magician seeks the universe.  This is the way with magicians. 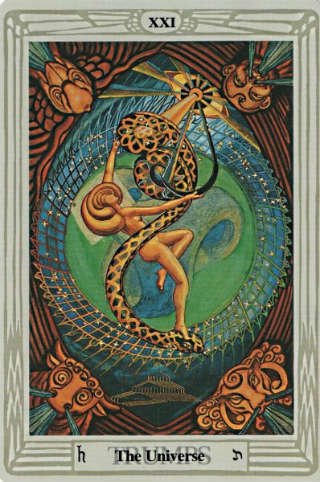