W.Y. Evans-Wentz - The Fairy-Faith in Celtic Countries - The Celtic Otherworld and the Sidhe 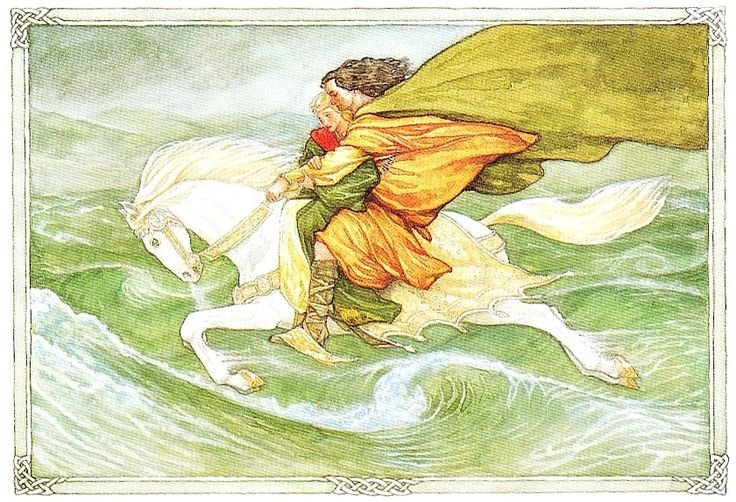 The Celtic Otherworld is like that hidden realm of subjectivity lying just beyond the horizon of mortal existence, which we cannot behold when we would, save with the mystic vision of the Irish seer........

The Heaven-World of the ancient Celts, unlike that of the Christians, was not situated in some distant, unknown region of planetary space, but here on our own earth. As it was necessarily a subjective [spirit] world, poets could only describe it in terms more or less vague; and its exact geographical location, accordingly, differed widely in the minds of scribes from century to century. Sometimes, as is usual to-day in fairy-lore, it was a subterranean world entered through caverns, or hills, or mountains, and inhabited by many races and orders of invisible beings, such as demons, shades, fairies, or even gods.

And the underground world of the Sidhe-folk, which cannot be separated from it, was divided into districts or kingdoms under different fairy kings and queens, just as the upper world of mortals. We already know how the Tuatha De Danann or Sidhe-folk, after their defeat by the Sons of Mil at the Battle of Tailte, retired to this underground world and took possession of its palaces beneath the green hills and vales of Ireland; and how from there, as gods of the harvest, they still continued to exercise authority over their conquerors.......................

In the legend of Bran's friends, who sat over dinner at Harlech with the Head of Bran for seven years, three curious birds acted as musicians, the Three Birds of Rhiannon, which were said to sing the dead back to life and the living into death;--but the birds were not in Harlech, they were out over the sea in the atmosphere of Rhiannon's realm in the bosom of Cardigan Bay.

And though we might say of that Otherworld, as we learn from these Three Birds of Rhiannon, and as Socrates would say, that its inhabitants are come from the living and the living in our world from the dead there, yet, as has already been set forth …, we ought not to think of the Sidhe-folk, nor of such great heroes and gods as Arthur and Cuchulainn and Finn, who are also of its invisible company, as in any sense half-conscious shades; for they are always represented as being in the full enjoyment of an existence and consciousness greater than our own.

In Irish manuscripts, the Otherworld beyond the Ocean bears many names. It is Tír-na-nog, 'The Land of Youth'; Tír-Innambéo, 'The Land of the Living'; Tír Tairngire, 'The Land of Promise'; Tír N-aill, 'The Other Land (or World)'; Mag Már, 'The Great Plain'; and also Mag Mell, 'The Plain Agreeable (or Happy).'

But this 'western' Otherworld, if it is what we believe it to be--a poetical picture of the great subjective world--cannot be the realm of any one race of invisible beings to the exclusion of another. In it all alike--gods, Tuatha De Danann, fairies, demons, shades, and every sort of disembodied spirits--find their appropriate abode; for though it seems to surround and interpenetrate this planet even as the X-rays interpenetrate matter, it can have no other limits than those of the Universe itself.