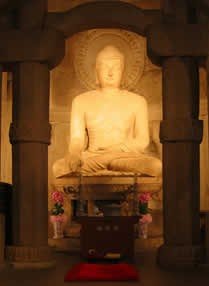 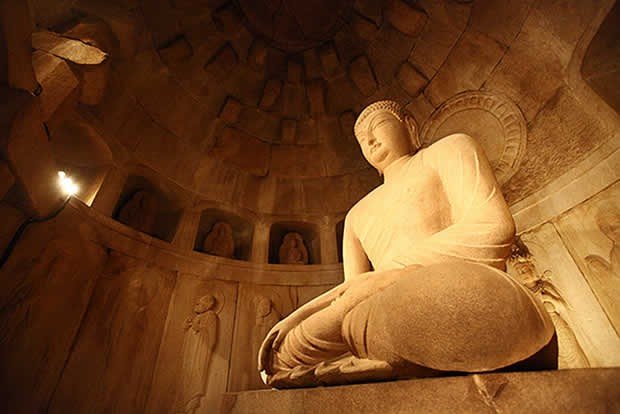 The Seokguram Grotto is a hermitage and part of the Bulguksa temple complex. It lies four kilometers east of the temple on Mt. Tohamsan, in Gyeongju, South Korea.

The grotto overlooks the Sea of Japan (East Sea) and lies 750 meters above sea level. In 1962, it was designated the 24th national treasure of Korea and in 1995, Seokguram was added to the UNESCO World Heritage List.

Seokguram is an artificial grotto made from hundreds of different granite stones. There was no mortar used and the structure is held together by stone rivets. It symbolises the spiritual journey of a pilgrim towards ‘Nirvana’. Inside the grotto, the antechamber and corridor represented the earth while the rotunda represents heaven.  The dome of the rotunda is 6.84 meters to 6.58 meters in diameter.

The basic layout of the grotto includes an arched entrance which leads into a rectangular antechamber and then a narrow corridor, which is lined with bas-reliefs, and then finally leads into the main rotunda. The centerpiece of the granite sanctuary is a Buddha statue seated in the main chamber. The Buddha is seated on a lotus throne with legs crossed and  is surrounded by fifteen panels of bodhisattvas, arhats and ancient Indian gods in the rotunda as well as  ten statues in niches along the rotunda wall. Forty different figures representing Buddhist principles and teachings are in the grotto. The ceiling of the Seokguram grotto is decorated with half moons, the top is decorated with a lotus flower.

The architects employed the concept of the ‘golden rectangle in its design.  The grotto also incorporated other symbolism, a fountain for example and a watercourse, which no longer exists, in front of the temple.

Fountain
Lotus
Phases of the moon
Rivers and streams