In general, the techniques used by the North American Indians are not that extreme.  They are not the kindest of mechanisms, but on the whole they rather reflect the fact that they were usually reserved for men in a very macho society.  They did use fasting, the dancing was long and frenetic and exhausting, they used smoke inhalation and steam inhalation – although were not aware that the effects were achieved via hypoxia – and they also used techniques like the vision pit which must have been pretty terrifying.

This technique however, used only at the Sun Dance ceremony is truly extreme.  As it is part of their system however, it is important to document its existence.  It clearly worked, but my godfathers what a thing to do to yourself!

One can see that for a tribe who had endured a freezing winter, the return of the sun in spring, moving higher in the sky and warming them, making the grass grow on which the buffalo on which they depended fed, was a thing to be celebrated, and according to legend celebrate they did initially with a simple dance.

But as time went on the dance became more complex and the purposes more diverse.

The dance is called Wiwanyang wacipi and is for all Native Americans a feast which brings all people together.  It was and is a happy time when the choke cherries were ripe, the grass was up and the game plentiful.  It was a time for meeting old friends and making new ones.  A time also for meeting a future partner.  But things changed over time.  Whereas the vision pit is intended to be a solitary vision quest, the Sun Dance became a group vision quest.

In general this was a ceremony for men only.  Although women could participate by having many tiny squares of flesh cut from their arms, it was only the men who participated in the flesh piercing.

There was a build up to the ceremony itself with the finding and erecting of a sunpole and a sun lodge.
For the first three days the men danced from dawn to sunset, blowing on their eagle bone whistles.  They danced and danced until they were faint with weariness

There was no merry making, no visiting back and forth on the night before the fourth day.  The medicine men prayed as the people stayed in their lodges.

On the fourth day, the participants purified themselves in a sweat lodge and were painted each in different ways.

The ceremony was held according to a vow for each participant, each had to vow to want to achieve something by participating.  For example, men might promise that if saved in battle or if the life of a sick child was saved, to offer themselves in the Sun Dance, thus the painting ceremony reflected this vow.  They were given wreaths to wear and long red kilts which covered their lower bodies.  The chest was left bare.  Medicine bundles hung from their necks.

And then the piercing ceremony began.

Note that this observation is a little longer than normal because it covers the entire ceremony. 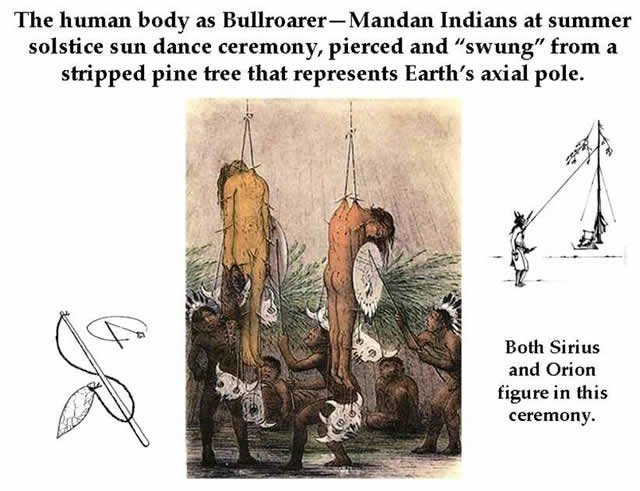 Staring open eyed at the blazing sun, the blinding rays burning deep into your skull, filling it with unbearable brightness.  Blowing on an eagle bone whistle clenched between your teeth until its shrill sound becomes the only sound in the world.....

Dancing, dancing, dancing from morning to night without food or water until you are close to dropping in a dead faint...  Pulling, pulling away at a rawhide thong which is fastened to a skewer embedded deeply in your flesh, until your skin stretches and rips apart as you finally break free with blood streaming down your chest... this is what some of us must endure during the sun dance.

Many people do not understand why we do this.  They call the sun dance barbarous, savage, a bloody superstition.  The way I look at it, our body is the only thing which truly belongs to us.  What we Indians give of our flesh, our bodies, we are giving of the only thing which is ours alone......

The dance is not so severe now as it once was, but even today it asks much of a man.  Even today a man may faint for lack of food or water.  He may become so thirsty blowing on his eagle bone whistle that his throat will be parched like a cracked dry riverbed.  He may be blind for a time from staring at the sun so that his eyes see only glowing spirals of glaring whiteness.

The pain in his flesh, where the eagle's claw is fastened in his breast, may become so great that a moment arrives when he will no longer feel it.  It is at such moments, when he loses consciousness, when the sun burns into his mind, when his strength is gone and his legs buckle under him, that the visions occur – visions of becoming a medicine man, visions of the future.  Insights gained at such a price are even greater than those that come to a man on a hilltop during his vision quest; they are truly wakan - sacred..............

At last it was the men's turn and that was no child's play believe me.  Nobody had been forced or talked into this, but once he had made a vow, he had to go through with it.  You can't break your word to Wakan Tanka.  The piercing could be done in four different ways.  For the 'Gazing at the Buffalo' way the flesh on the dancer's back was pierced with skewers.  From these were hung up to eight buffalo skulls.  Their weight pulled the skewers through the flesh after a few hours.  The second way was 'Gazing at the sun learning' This was the one most used.  The flesh on the dancer's breast was pierced about a hand's width above each nipple and a wooden stick or eagle's claw stuck right through the muscle.  At the end of the dance each man had to tear himself loose.  The third way was 'Standing enduring'.  The dancer was placed between four poles.  Thongs were fastened in his flesh – two in his chest and two in his back underneath each shoulder blade.  The loose ends were tied to the poles and the dancer had to struggle bravely to free himself.  The last way was 'Gazing at the sun suspended'.  In this case ropes were tied to skewers in a man's chest and back and he was pulled up into the air with his feet above the ground.  This was the most severe test of all, as the dancer could do little to hasten the end of his ordeal by pulling or jerking but had to wait until his own weight finally ripped his flesh open.  Some just kept hanging there until friends or relatives pulled them down.

Usually a man had his friends by his side, encouraging him, cleaning his wounds and wiping away the cold sweat with a bundle of soft sage leaves.  Plants used in this way made a powerful love charm prized by women... A girl might also quench her lover's thirst by bringing him a little water to drink if thirst threatened to overcome him.

Some white men shudder when I tell them these things.  Yet the idea of enduring pain so that others may live should not strike you as strange.  Do you not in your churches pray to one who is pierced?

….It is when we are fasting on the hilltop, or tearing our flesh at the sun dance, that we experience the sudden insight, come closest to the Mind of the Great Spirit.  Insight does not come cheaply and we want no angel or saint to gain it for us and give it to us second-hand.

It is time for the piercing now.  Maybe you cannot see clearly what happens down at the ground near the pole.  Pete is lying on a buffalo hide on his back with a piece of wood clenched between his teeth.  Bill is kneeling over him, taking Pete's flesh above the heart between his teeth, biting hard, making the flesh go white and numb so that the piercing won't hurt as much.  Did you see the flash of the knife?  It is done and Bill is putting a strong sage stick and an eagle's claw through the wound.  Pete gets up and the rawhide cord hanging down from the pole is attached to the stick.  Bill now pierces the other two men in the same way.  I shall now leave you for a moment and do Bill's piercing for him.  I'll do it swiftly, gently, like a feather on a wound, because I have much practise.

Did you look at your watch?  I am sure it took no longer than a minute.  The dancers are helped to stand up.  Each one has a wreath of sage on his head.  Once they are bound to this pole, the medicine man who runs the dance no longer has pity on the men.  He pulls the dancers backward until the flesh stands out on their chests.  When this is done the singers sing the first song

'I offer myself to you Great Spirit.  Have me for what I want.  Pity me, for I want to live'

The dancers are now raising their arms in prayer, blowing on their eagle bone whistles.  They will stay in one place, turning always to the sun, always facing it as it travels.... everybody is silent, except for the singers.

I know of a man who was cured underneath the centre pole.  This guy had a bad case of arthritis.  He could hardly walk or bend over anymore.  And when he was stretched out underneath the cottonwood he had a vision.  He saw a rider coming on at a dead run between the white flags, skimming in over the sun shade, astride a grey horse whose hoofs never touched the ground.  That sick man was stiff with terror seeing the horseman come at him full speed.  And he could feel the rider touching him with his lance and disappear.

And that man got up and he could walk.  His sickness was gone.  There is a great power near the altar and the sacred pole during a sun dance.