Out of body
Hallucination 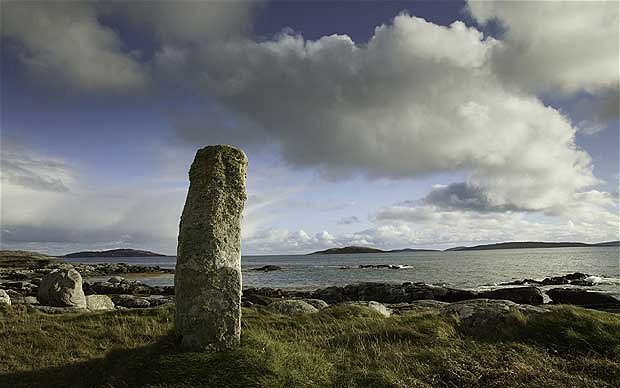 Our next witness from Barra is John Campbell, who is ninety-four years old, yet clear-headed. He was born on Barra at Sgalary, and lives near there now at Breuvaig. We were on our way to call at his home, when we met him coming on the road, with a cane in each hand and a small sack hanging from one of them. Michael saluted him as an old acquaintance, and then we all sat down on a big boulder in the warm sunshine beside the road to talk. The first thing John wanted was tobacco, and when this was supplied we gradually led from one subject to another until he was talking about fairies. And this is what he said about them:--

The Fairy and the Fountain.--'I had a companion by the name of James Galbraith, who was drowned about forty years ago, and one time he was crossing from the west side of the island to the east side, to the township called Sgalary, and feeling thirsty took a drink out of a Spring well on the mountain-side. After he had taken a drink, he looked about him and saw a woman clad in green, and imagined that no woman would be clad in such a colour except a fairy woman. He went on his way, and when he hadn't gone far, looked back, and, as he looked, saw the woman vanish out of his sight. He afterwards reported the incident at his father's house in Sgalary, and his father said he also had seen a woman clad in clothes of green at the same place some nights before.'

Nature of Fairies.--At this point, Michael turned the trend of John's thoughts to the nature of fairies, with the following result:--'The general belief of the people here during my father's lifetime was that the fairies were more of the nature of spirits than of men made of flesh and blood, but that they so appeared to the naked eye that no difference could be marked in their forms from that of any human being, except that they were more diminutive.

I have heard it said that the fairies live in knolls on a higher level than that of the ground in general, and that fairy songs are heard from the faces of high rocks.

The fairies of the air (the fairy or spirit hosts) are different from those in the rocks. A man whom I've seen, Roderick MacNeil, was lifted by the hosts and left three miles from where he was taken up. The hosts went at about midnight. A man awake at midnight is in danger.