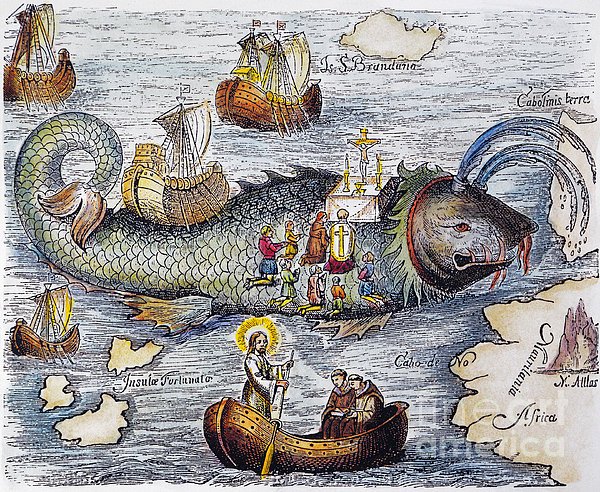 THE VENERABLE FATHER and his companions sailed out into the ocean and their boat was carried along for forty days. One day there appeared to them a beast of immense size following them at a distance. He spouted foam from his nostrils and ploughed through the waves at a great speed, as if he were about to devour them.  When the brothers saw tis they called upon the Lord, saying:

'Deliver us, Lord, so that the beast does not devour us.'

'Do not be afraid. You have little faith. God, who always defends us, will deliver us from the mouth of this beast and from other dangers.'

As the beast came near them he caused waves of extraordinary height to go before him right up to the boat, so that the brothers were more and more afraid. The venerable elder also raised his hands to heaven and said :

After these three pleas asking for deliverance, a mighty monster passed near them from the west going to encounter the beast. He immediately attacked him, emitting fire from his mouth. The elder spoke to his brothers:

'Look, my sons, at the great deeds of our Saviour! See how the beasts obey their creator. Wait presently for the outcome of this affair. This battle will do us no damage. It will redound to the glory of God.'

When he had said this the wretched beast that pursued the servants of Christ was cut into three pieces before their eyes. The other returned after his victory to where he had come from.