In the seal shown here, the Fire god is trapped in a volcano, and man has travelled to steal fire from the Fire god - similar to Prometheus. 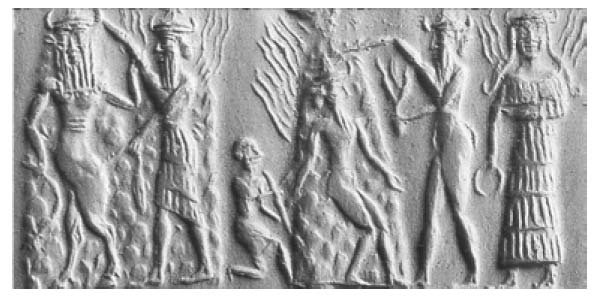 Gibil in Sumerian mythology is the god of Fire, variously of the son of An and Ki, An and Shala or of Ishkur and Shala. He later developed into the Akkadian god Gerra.

CHhaelk' is the Babylonian and Akkadian name for the god of Fire, derived from the earlier Sumerian deity Gibil. He is the son of Anu and Antu.

So as you can see there is agreement amongst scholars that there is a god of Fire, that there are synonymous names , but the parentage differs amongst belief systems.

Girra accompanied Mesopotamians in their daily lives. He originated as a Sumerian god but his cult transcended time. He was worshipped throughout Mesopotamian history until the Seleucid period. As refiner of metals he is also the patron of metallurgists.   There is thus a link here with the Smith and the Blacksmith.

Egg
Fire
Map of the Egg

Blacksmith
Egg (as symbol)
Fire
Map of the Egg
Smith
Smith, the