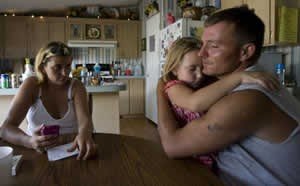 BLESSING (AP) - Three Texas fishermen who spent eight days stranded in the Gulf of Mexico atop their capsized boat endured hunger, blistering heat, scares from sharks and hallucinations, but they never gave up hope they'd be rescued.

James Phillips, right, one of three fisherman who was rescued after eight days adrift in the Gulf of Mexico, hugs his daughter Laney Phillips, 7, as his wife Shane Phillips looks on Sunday in Blessing.

The men were reunited with their families early Sunday after they were found sitting on their 23-foot catamaran 180 miles from land. They were identified as Hawkins, 43, of Markham; James Phillips, 30, of Blessing; and Curtis Hall, 28, of Palacios.

"I knew we were coming home; I never had a doubt," Phillips, the boat owner, told the Houston Chronicle.

The crew of a sport fishing boat spotted the men waving their white T-shirts near Port Aransas and rescued them Saturday. The three were reported missing Aug. 22 after they left Matagorda, about 90 miles southwest of Houston, on a fishing trip and never returned. Port Aransas is about 130 miles from Matagorda.

The three were asleep that Friday night and were awakened by water coming in the boat, Hawkins said.

"Once we were awake and saw what happened, it flipped over in one minute," Phillips told the Chronicle. "Then us country boys went into survival mode. That's all we could do."'

The men rationed their salvaged bubble gum, crackers, beer and chips, and used a hose to suck fresh water out of the internal "washdown" tank. Fishermen often keep such a tank to wash fish slime off their boat when they are out in the salt water.

"We'd eat crackers one day, and then a handful of chips," Phillips said. "Everything tasted like gasoline and saltwater."

Hall and Haskins both said they saw U.S. Coast Guard helicopters and rescue planes fly over. The Coast Guard, which gave up the search after the men had been missing a week, never saw them.

"About the fourth or fifth day we started hallucinating about people dropping off food and water," Phillips said. "And we were talking to them, but they weren't there," Phillips said.

One thing the men saw that wasn't a hallucination was sharks.

"We had a bunch of black-tipped sharks schooling up under the boat," Phillips said. "One of them jumped across the back of the boat."

Finally, they were spotted by Eddie Yaklin, a Corpus Christi car dealer who was fishing on his 75-foot yacht. Yaklin told NBC the boat went right past the men while heading to a nearby oil rig to fish. But then after about an hour he spotted them. They were atop their boat when Yaklin arrived.

Hawkins said he initially wondered if his rescuers were another figment of his imagination.

" My first reaction was, 'Is this really real?' You just have to kind of sit back and say is this real or hallucination," he said. "You have to wake yourself up three or four times to make sure it is real."