Euripides - The Bacchae - First they let their hair fall loose

It would seem that numerous powers were acquired as a consequence of these experiences, one of which was ‘summoning’.  Summoning is the ability to summon and communicate with animals.  There are examples of summoning as a shamanic ability in the section on Shinto and of course saint Francis of Assissi was also able to ‘summon’ and communicate with animals.  It appears that the initiates of the Dionysian Mysteries also gained the ability to summon, plus other skills, the following extract shows just what was possible ….
Below A young male satyr plays pan pipes, while a nymph suckles a goat.  Both satyr and nymph are initiates – they have become ‘gods’, from Pompei The Villa of Mysteries 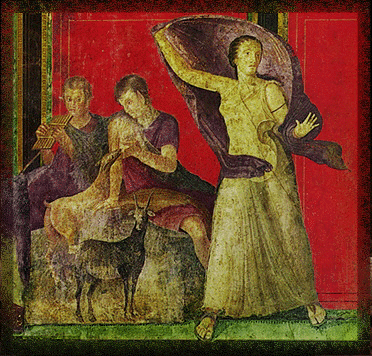 First they let their hair fall loose, down
over their shoulders, and those whose straps had slipped
fastened their skins of fawn with writhing snakes
that licked their cheeks. Breasts swollen with milk,
new mothers who had left their babies behind at home
nestled gazelles and young wolves in their arms,
suckling them. Then they crowned their hair with leaves,
ivy and oak and flowering bryony. One woman
struck her thyrsus against a rock and a fountain
of cool water came bubbling up. Another drove
her fennel in the ground, and where it struck the earth,
at the touch of god, a spring of wine poured out.
Those who wanted milk scratched at the soil
with bare fingers and the white milk came welling up.
Pure honey spurted, streaming, from their wands.
If you had been there and seen these wonders for yourself,
you would have gone down on your knees and prayed
to the god you now deny.