Dürer, Albrecht - Symbolism - Melencolia, the magic square and the polyhedron

Durer produced one of his most famous engravings Melancholia in 1514. It contains the first magic square to be seen in Europe, cleverly including the date 1514 as two entries in the middle of the bottom row. Also of mathematical interest in Melancholia is the polyhedron in the picture. The faces of the polyhedron appear to consist of two equilateral triangles and six somewhat irregular pentagons. 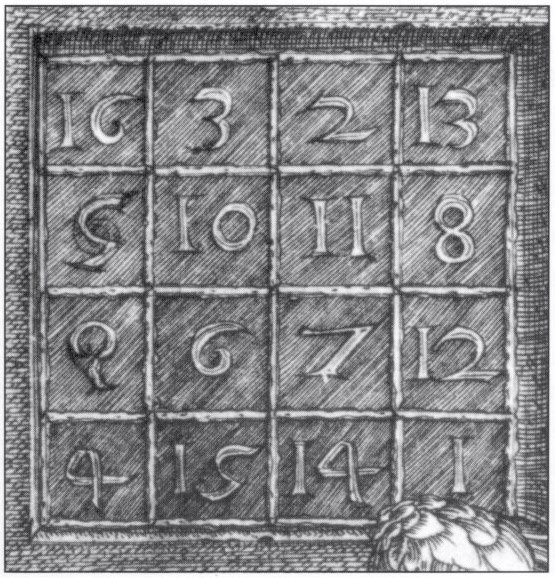 In the mathematical field of graph theory, the Dürer graph is an undirected graph with 12 vertices and 18 edges. It is named after Albrecht Dürer, whose 1514 engraving Melencolia I includes a depiction of Dürer's solid, a convex polyhedron having the Dürer graph as its skeleton. Dürer's solid is one of only four well-covered simple convex polyhedra.

Dürer's solid is combinatorially equivalent to a cube with two opposite vertices truncated, although Dürer's depiction of it is not in this form but rather as a truncated rhombohedron or triangular truncated trapezohedron. The exact geometry of the solid depicted by Dürer is a subject of some academic debate, with different hypothetical values for its acute angles ranging from 72° to 82°. 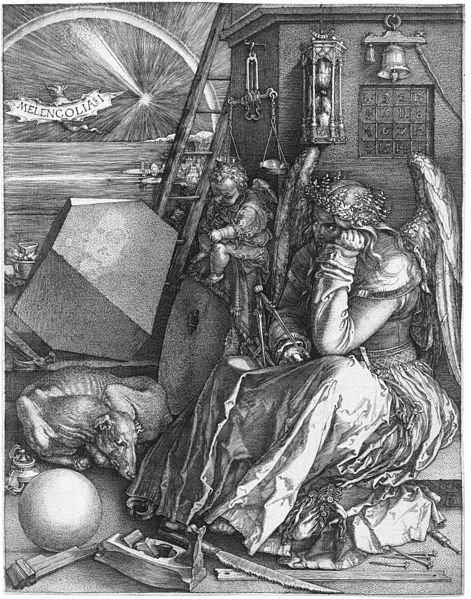 Melencolia [from The Dimensions of Paradise:  Sacred geometry – John Michell]

Philosophers in the Renaissance were deeply interested in the ‘melancholy humor’, the advantages to be gained by invoking it and the price to be paid in terms of health and spirit.

Ficino advised that the dark Saturnine humor that comes with obsessive study should be mitigated by Jovial or Venereal influences.  Attracting the powers of Jove is the function of the magic square of Jupiter, which in Melencolia is placed above the brooding figure.

Yet the figure is by no means jovial.  Wings folded, listlessly twirling a compass, she appears sunk in despair.  Around her are strewn the instruments that her studies of the universe have caused her to acquire.  Evidently these have served their purpose and the figure seeks a higher stage of initiation.

Thus she directs her eyes upward, towards the cherub who sits at the centre of the hidden scheme of geometry, and to the comet and rainbow behind him.

The figure’s melancholy trance is induced and deliberate, for the acquisition of learning.  She has passed through the first stage of initiation, having mastered the crafts and practical sciences.  Now she is ready for higher forms of study.

-          In its imaginative function, the soul’ becomes a habitation for the lower daemons [spirit helpers] from whom it often receives wonderful instructions in the manual arts’

-          The next form relates to the rational part of the soul, exposing it to the middle sort of daemons [spirit helpers] who inspire knowledge of nature and humanity, and instruct in philosophy

-          The third form of possession, is by the Higher spirit, inducing direct knowledge of divinity, the eternal laws of the universe, the nature of soul and the destiny of things