The Ashoka is a rain-forest tree prized for its beautiful foliage and fragrant flowers. It is a very handsome, small, erect evergreen tree, with deep green leaves growing in dense clusters.  The Ashoka flowers come in heavy, lush bunches. They are bright orange-yellow in color, turning red before wilting.

The ashoka tree is considered sacred throughout the Indian subcontinent, because it represents the Tree of Life, the red flowers being symbolically flame and fire as well as a sign of enlightenment.  The symbolism is especially prevalent in India and Sri Lanka and the tree  is often found in royal palace compounds and gardens as well as close to temples throughout India.

The Ashoka tree and Yakshi are often found together in the sculptures of Buddhist and Hindu temples.  Yakshi  - representing the fertility of the tree – hence a symbol of the Mother - is depicted with her foot on the trunk and her hands holding the branch of a flowering ashoka tree. 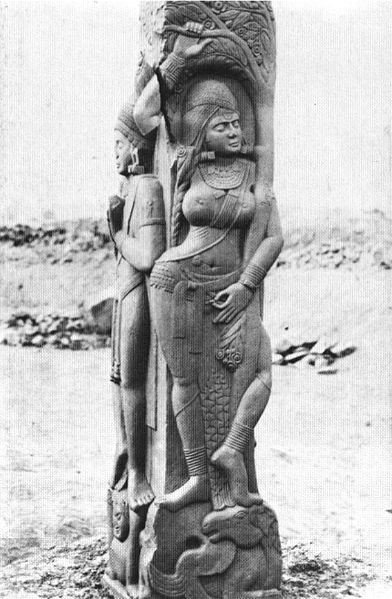