Alice in Wonderland and Alice through the Looking Glass are the most reliable source I know for substances that will give you a spiritual experience – or at least an experience.  So why the black pepper?

There have been suggestions from American writers that the 'pepper' is cocaine!  This I'm afraid I do not buy, cocaine was first synthesised in 1855 and not written about until 1860.   Carroll lived from 1832 to1898, so he might have known about it, but his books tended to document non drug based mechanisms [despite the way, again, American writers tend to home in on the mushrooms and the opium].

Black pepper contains Piperine.  By inhibiting drug metabolism, piperine may increase the bioavailability of various compounds and alter the effectiveness of some medications. So piperine is a potentiator of other chemicals, which might be why Lewis Carroll mentioned it – if he had a little taste of mushrooms, or laudanum, a small booster of black pepper might have sent him sky high and because he didn’t know the chemistry of the reaction, he might have assumed that pepper too was active. 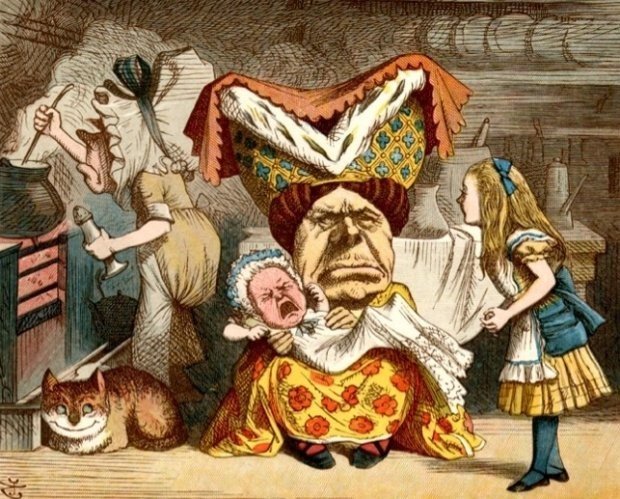 The door led right into a large kitchen, which was full of smoke from one end to the other: the Duchess was sitting on a three-legged stool in the middle, nursing a baby; the cook was leaning over the fire, stirring a large cauldron which seemed to be full of soup.

'There's certainly too much pepper in that soup!' Alice said to herself, as well as she could for sneezing.

There was certainly too much of it in the air. Even the Duchess sneezed occasionally; and as for the baby, it was sneezing and howling alternately without a moment's pause. The only things in the kitchen that did not sneeze, were the cook, and a large cat which was sitting on the hearth and grinning from ear to ear.

'Please would you tell me,' said Alice, a little timidly, for she was not quite sure whether it was good manners for her to speak first, 'why your cat grins like that?'

She said the last word with such sudden violence that Alice quite jumped; but she saw in another moment that it was addressed to the baby, and not to her, so she took courage, and went on again:--'I didn't know that Cheshire cats always grinned; in fact, I didn't know that cats COULD grin.'

'I don't know of any that do,' Alice said very politely, feeling quite pleased to have got into a conversation.

Alice did not at all like the tone of this remark, and thought it would be as well to introduce some other subject of conversation. While she was trying to fix on one, the cook took the cauldron of soup off the fire, and at once set to work throwing everything within her reach at the Duchess and the baby--the fire-irons came first; then followed a shower of saucepans, plates, and dishes. The Duchess took no notice of them even when they hit her; and the baby was howling so much already, that it was quite impossible to say whether the blows hurt it or not.

'Oh, PLEASE mind what you're doing!' cried Alice, jumping up and down in an agony of terror. 'Oh, there goes his PRECIOUS nose'; as an unusually large saucepan flew close by it, and very nearly carried it off.

'If everybody minded their own business,' the Duchess said in a hoarse growl, 'the world would go round a deal faster than it does.'

'Which would NOT be an advantage,' said Alice, who felt very glad to get an opportunity of showing off a little of her knowledge. 'Just think of what work it would make with the day and night! You see the earth takes twenty-four hours to turn round on its axis--'

'Talking of axes,' said the Duchess, 'chop off her head!'

Alice glanced rather anxiously at the cook, to see if she meant to take the hint; but the cook was busily stirring the soup, and seemed not to be listening, so she went on again: 'Twenty-four hours, I THINK; or is it twelve? I--'

'Oh, don't bother ME,' said the Duchess; 'I never could abide figures!'

And with that she began nursing her child again, singing a sort of lullaby to it as she did so, and giving it a violent shake at the end of every line:

'Speak roughly to your little boy,
And beat him when he sneezes:
He only does it to annoy,
Because he knows it teases.'

While the Duchess sang the second verse of the song, she kept tossing the baby violently up and down, and the poor little thing howled so, that Alice could hardly hear the words:--

'I speak severely to my boy,
I beat him when he sneezes;
For he can thoroughly enjoy
The pepper when he pleases!'