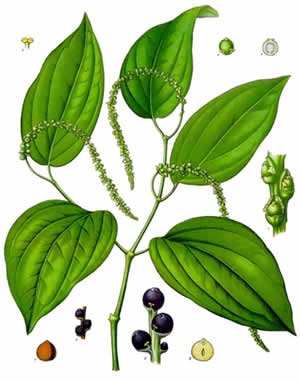 Black pepper (Piper nigrum) is a flowering vine in the family Piperaceae, cultivated for its fruit, which is dried and used as a spice and seasoning.  The spiciness of black pepper is due to the chemical piperine, of which more shortly.

Dried ground pepper has been used since antiquity as a preservative, for its flavour and as a medicine.  Black pepper is the world's most traded spice.

The plant produces what are botanically known as drupes. A drupe is a fruit in which an outer fleshy part surrounds a shell of hardened endocarp with a seed inside.

Black peppers are native to India and are extensively cultivated there. Two well-known types come from India's Malabar Coast: Malabar pepper and Tellicherry pepper. Tellicherry is a high-grade pepper, made from the largest, ripest 10% of fruits from Malabar plants grown on Mount Tellicherry. Black pepper is also grown elsewhere in the tropical regions. Sarawak pepper is produced in the Malaysian portion of Borneo; Lampung pepper on Indonesia's island of Sumatra and White Muntok pepper also comes from Indonesian. In 2008, Vietnam was by far the world's largest producer and exporter of pepper, producing 34% of the world's Piper nigrum crop. 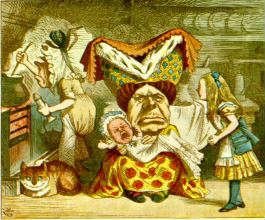 The biochemical component which attributes pungency to black pepper (Piper nigrum) is mainly the alkaloid piperine, which is found both in the outer fruit and in the seed. Black pepper contains between 4.6% and 9.7% piperine by mass, and white pepper slightly more than that.

The outer fruit layer, left on black pepper, contains important odour-contributing terpenes including alpha and beta-pinenes, sabinene, limonene, linalool, beta-caryophyllene, camphene, etc which give citrusy, woody, and floral notes. These scents are mostly missing in white pepper, which is stripped of the fruit layer. So black pepper is not totally dissimilar to nutmeg in the flavourings it contains, what makes it different is the piperine.

Just like nutmeg and any number of other plants in this large section, the chemical constituents of piper nigrum vary depending on where the plant has been grown, the soil, the part of the plant examined and the growing conditions. Furthermore, storage affects the peppercorns; over time and in poor storage conditions the ‘aromatics’ evaporate changing the chemical composition . The musty flavour of old pepper is attributed to the formation of heterocyclic compounds (2-isopropyl-3-methoxypyrazine, 2,3-diethyl-5-methylpyrazine) in concentrations of about 1 ppb. (Eur. Food Res. Technol., 209, 16, 1999). In overstored white pepper, scatole is formed (2 ppm) and imparts an unpleasant, faecal flavour. (Eur. Food Res. Technol., 209, 27, 1999).

But on further examination, black pepper on its own has none of these capabilities, it is only when teamed with other compounds that it appears to have these effects, we shall see why in a moment.

Chemical Constituents of Peppers (Piper spp.) and Application to Food Preservation: Naturally Occurring Antioxidative Compounds - Nobuji Nakatani, Reiko Inatani, Haruko Ohta, and Atsuko Nishioka
It is known that certain pepper spices possess antifungal and antibacterial activities. Antibacterial activities of compounds [2-6] from P. nigrum and [7a], [7b], and [8] from P. retrofractrum were measured against eight microorganisms, including Staphylococcus aureus and Streptococcus faecalis, to determine minimum inhibition concentrations. The results of these studies revealed that the antibacterial activity of these compounds was low.

But Piper nigrum has proved itself over the years to be a very good preserver of food [ref:  Chemical Constituents of Peppers (Piper spp.) and Application to Food Preservation: Naturally Occurring Antioxidative Compounds - Nobuji Nakatani, Reiko Inatani, Haruko Ohta, and Atsuko Nishioka]

Be extremely careful how you use black pepper in food, extremely careful.  It does not take much before it becomes a toxin. And, for the reasons explained below it might be better avoided with pharmaceuticals.

Piptigrine, for example, is a compound being considered as an insecticide !– which should tell you something about its properties [ref Piptigrine, a new insecticidal amide from Piper nigrum Linn - Siddiqui BS, Gulzar T, Begum S, Afshan F.; H.E.J. Research Institute of Chemistry, International Centre for Chemical Sciences, University of Karachi, Karachi-75270, Pakistan]

Safrole, which is only present in trace quantities can be carcinogenic at higher quantities [ref: Carcinogenic and mutagenic activities of safrole, 1'-hydroxysafrole, and some known or possible metabolites - Wislocki PG, Miller EC, Miller JA, McCoy EC, Rosenkranz HS. PMID: 192464]

In any quantity, pepper also has an irritant effect upon the stomach and the intestines, exacerbating ulcers and giving great pain………..[ref:  Effect of pepper and bismuth subsalicylate on gastric pain and surface hydrophobicity in the rat. Aliment Pharmacol Ther. 1998 May; 12(5):483-90. Lichtenberger LM, Romero JJ, Carryl OR, Illich PA, Walters ET. Department of Integrative Biology, The University of Texas-Houston Medical School.]

Where black pepper has a use is in enhancing the availability of the 'good' ingredients in foods.

Have you ever tried black pepper on strawberries?  It is good.

There are stories on the Internet that state that Black pepper is a sort of closet hallucinogen.

Black pepper is not a hallucinogen or a psychedelic. It might at a pinch [sorry for the pun] give you a sort of slight giddy feeling from hypoxia if you accidentally breathe it or [even stupider] snort it. It might give you an experience of sorts from the pain you get as it attacks your intestines and the endorphins are released, but any hallucinations are principally because, at very high doses it is poisonous.

So we need to think differently here and look at its healing potential and Black Pepper has healing ability from two routes -  Potentiation and Heat.

Piperine has been found to inhibit human enzymes, in particular enzymes CYP3A4 and P-glycoprotein, enzymes important for the metabolism and transport of xenobiotics and metabolites

By inhibiting drug or chemical metabolism of any sort, piperine may increase the bioavailability of various compounds and alter the effectiveness of some medications or food constituents. So piperine is a potentiator of other chemicals.

If we just look at the effect piperine has on curcumin - one of the major chemicals in turmeric – it can enhance its bioavailability by 2000% in humans!

It is important to understand that this is true of a whole range of chemicals, from vitamins to minerals, making black pepper both immensely useful and immensely dangerous. Piperine can dramatically increase the absorption, for example, of selenium, vitamin B and beta-carotene as well as other nutrients.

We need also to remember that we have natural endogenous chemicals in our body that swish around doing their job as chemical messengers. Included in this raft of neurotransmitters are chemicals like serotonin and dopamine, so even if you haven’t taken any drugs or other xenobiotics, black pepper could have the effect of potentiating these – whatever your mood, whatever your state, it will be exaggerated – perhaps a hundred-fold!!

It gives you Fever

Why do you sweat after having a peppery meal? The answer is that Piperine present in black pepper acts as a thermogenic compound. Thermogenesis is the process of heat production in organisms. Piperine enhances the thermogenesis of lipid and accelerates energy metabolism in the body.  Piperine is a TRPV1 agonist and the function of TRPV1 is detection and regulation of body temperature. It is also involved in the transmission and modulation of pain (nociception), as well as the integration of diverse painful stimuli.

Viruses do not like heat and one thing they do not like especially is body heat.  Thus many of black pepper's attributed healing properties may well be against viruses and its main route of action may be 'ter boil the viruses into extinction!'