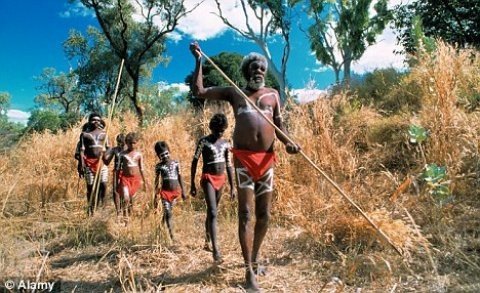 Among the Dieri, near Lake Eyre, a spirit makes an incision in the postulant's abdomen and inserts a spirit-snake,  his future familiar.

The postulant also visits the sky by means of a hair-cord.  In the neighbouring Piladapa tribe, a spirit drives a "pointing-stick” into the back of the postulant's head,  but the latter recovers and receives power and quartz from the spirit. Included in his power is that  of extracting a person's "insides."

In western South Australia, the postulant is put in a waterhole, where a mythical snake swallows him but later ejects him in the form of a baby onto a supposedly unknown place.

After a long search, he is found by the doctors and is restored to a man's size by being sung in the midst of a circle of fires.  After a period of seclusion and converse with spirits, he is red-ochred and treated as a corpse. Then the head doctor ritually breaks his neck, wrists, and other joints by marking them with a magic stone (australite). Into each mark or cut, and also into his stomach, the doctor inserts maban life-giving shell, after which the postulant is sung and revives, now full of power.

The description of the operation in the Mandjindja tribe, Warburon Ranges, Western Australia, adds the detail that two totemic spirits or heroes "kill" the postulant, cut him open from his neck to his groin, take out all his insides, and insert magical substances (mabain). They also take out his shoulder and thigh bone and insert mabain before drying and putting them back. They treat the frontal bone in the same way and also cut around the ankles and stuff mabain into those parts.

In Central and North-central Australia, a similar experience must be endured. Spirits of the "eternal dreamtime" or spirits of the dead kill the postulant and through an abdominal incision remove his insides and substitute new ones together with some magical substances. If medicine men are the operators, the method is similar to that employed in the Wiradjeri and neighboring tribes of western New South Wales. Crystals, extracted from their own bodies, are pressed and scored and "jerked" into the postulant's body. He is also given crystals in his food and drink. In addition, a hole is pierced in his tongue.

This ritual is interpreted by the members of the profession as a " death," during which the postulant is operated upon and receives additions to his insides, and after which he is restored to life.