A celestial note is a function of the universe. In turn it may have numerous sub-functions. These subfunctions may be being executed in parallel or in some sort of sequence, but they are being executed so fast all we hear is a certain tone that makes them seem like a musical instrument.

But these sub-functions may not all reside on the same vibrational level and the richness of the note we hear in celestial music and our belief that it is a musical instrument may derive from the effect produced by overtones.

This is Your Brain on Music – Professor Daniel Levitin
All natural objects in the world have several modes of vibration. A piano string actually vibrates at several different rates at once. The same thing is true of bells that we hit with a hammer, drums that we hit with our hands, or flutes that we blow air into; the air molecules vibrate at several rates simultaneously, not just a single rate……….
Surprisingly, these other frequencies are often mathematically related to each other in a very similar way; as integer multiples of one another . So if you pluck a string and its slowest vibration frequency is one hundred times per second, the other vibration frequencies will be 2 X 100 [200Hz], 3 X 100 [300 Hz] etc. If you blow into a flute or a recorder and cause vibrations at 310 Hz, additional vibrations will be occurring at twice, three times, four times etc, this rate 620 Hz, 930 Hz, 1240 Hz etc When an instrument creates energy at frequencies that are integer multiples such as this, we say that the sound is harmonic, and we refer to the pattern of energy at different frequencies as the OVERTONE series

Thus, for example, whenever divine love as a function executes, we may always hear a harp!

But there is an added dimension needed.  In addition to the extra frequencies that add to the overall perception of what instrument is being heard is the loudness [rate of vibration] of each note. Thus it is the combination of different pitches/notes AND the loudness of each that eventually tells us which instrument is being played. In music this is called the recognisable timbre.

This is Your Brain on Music – Professor Daniel Levitin
When you hear a saxophone playing a tone with a fundamental frequency of 220Hz, you are actually hearing many tones, not just one. The other tones you hear are integer multiples of the fundamental: 440, 660, 880, 1100, 1320, 1540 etc. These different tones – the overtones – have different intensities, and so we hear them as having different loudnesses. The particular pattern of loudnesses for these tones is distinctive of the saxophone, and they are what give rise to its unique tonal colour, its unique sound – its timbre. A violin playing the same written note – 220 Hz – will have overtones at the same frequencies, but the pattern of how loud each one is with respect to the others will be different

So if I add this to the diagram using a heavier line to denote different levels of loudness, this is how we hear different instruments in dreams, visions and hallucinations…

We have seen that the pitch is likely to be related to a level of storage. But loudness?

In some kinds of storage in computing the layout is not two dimensional it is three dimensional, one of the prime examples being optical storage and holographic storage. As this is an analogy I won’t provide too many details. As such ‘loudness’ may be a measure of the third dimension of spiritual storage. If we can imagine a very very large Rubrik’s cube then the components are actually stored all over the Rubrik’s cube and the execution of the processes is actually in vectors around the cube. 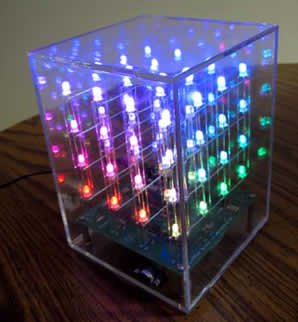 The nearest photo I could find to help in visualising this idea was of an LED display.

If we imagine that each of the lights is a component, then the path followed may well be up and down , but it may also be across, and along – so for example up one level across three squares, down one level across five squares and so on.

A matrix with paths that are linked in vectors.

The key to storage in the spiritual world may thus be a matrix.

This also implies that any travel around the spiritual realm is travel in three dimensions and requires the use of the cardinal directions as well as the levels.