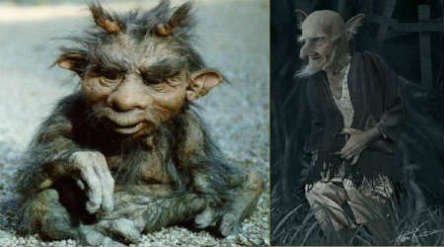 House elves, brownies, kobalds [Germany], boggarts [Yorkshire], Cluricaun [Ireland] and Nis [Scandinavia] are all ‘House spirits’. The other names by which this spirit helper is known are:

- Nisse – Jutland, Denmark and  Norway
- Tomtgubbe – Sweden – also known as the Old Man of the House
- Kirkegrim – this is a church Nis who orders and tidies things in churches and chastises those who misbehave!

House spirits are thus Spirit Beings that have attached themselves to a ‘house’.

The characteristics of a Brownie according to myth and legend are that they work hard, are orderly and tidy, thrifty and not greedy, and dedicate themselves to the service and support of humans vowing not to injure them.  As a result of their characteristics, they were used in domestic jobs, cleaning, bringing in water, washing up, dusting, tidying up.  Another name for a Brownie is a 'Portune'.

Some myths also relate that they punish those who are slovenly, but I suspect this is an addition to the myths to serve certain ends!

But there is also an extra subtle symbolic addition to what may well be a spirit being.

A house is the same symbolically to a Castle. Thus a ‘House spirit’ is a ‘Castle spirit’ – a character trait of the person who is represented by the house or castle.  So a house spirit can also be symbolically a set of learnt functions of a person.

Sometimes the learnt function is constructive – industriousness, tidiness, hardworking, cleanliness, neatness; at other times it can be entirely destructive – mischievousness, untidiness, laziness, dirtiness, or worse.

There is recognition in all myths that the character trait can be a curse or boon.  Furthermore, it may follow the entire family or sometimes it simply attaches itself to one person, which rather implies that some learnt functions are passed on from mother or father to offspring - whereas others are only applicable to a person.  In myths and folk tales, this is described as the Nisse, for example, either following the family wherever they go or following just the person wherever he or she goes, whichever castle [soul and body] they go, to the trait follows them.