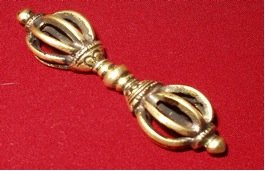 The vajra is a short metal ‘weapon’ that has the symbolic nature of a diamond (it can cut any substance but not be cut itself) and that of the thunderbolt (irresistible force) – see thunder and lightning.

It is thus another badge of office of the spiritually powerful.

Symbolically used by Buddhism, Jainism and Hinduism, the vajra spread along with Indian religion and culture to other parts of Asia. It is used as both a weapon and a symbol in Nepal, India, Tibet, Bhutan, Siam, Cambodia, Myanmar, China, Korea and Japan.