Kings and Queens are represented symbolically by cones but have mountains rather than hills as their symbolic size.

The symbolism of the levels and layers and the cone itself, however, is applied in the way the pieces are designed – at least in a chess set that is based on symbolic lines 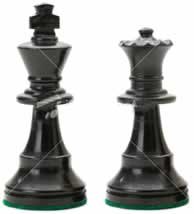 The King and Queen in chess also have symbolic levels.  Each level – Earth, Water, Air, Fire and Aether are present in their design.
But they have the symbolic Crown.  They are thus enlightened beings!
The Fire level though narrow, projects out some way giving the impression that it is a formidable barrier.

It may be worth adding that the pieces of the Castle, Bishop [Hierophant or Magi] and Knight also have the same symbolic meaning.

The symbolism is consistently applied in chess, in the tarot and in spiritual experiences.