The double gourd has the same symbolism as the hourglass, the cup or chalice and a host of other symbols that show one cone inverted over another cone.

Another name for the same thing is a calabash – a gourd shaped like an hourglass. 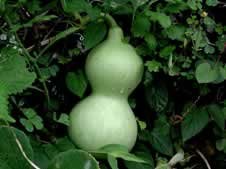 The calabash or bottle gourd  is a vine grown for its fruit, which can either be harvested young and used as a vegetable or harvested mature, dried, and used as a bottle, utensil, or pipe. For this reason, one of the calabash subspecies is known as the bottle gourd. The fresh fruit has a light green smooth skin and a white flesh. However the rounder varieties are called Calabash gourds whereas the longer and slimmer kinds are usually well known as bottle gourds.

There is added symbolism for a gourd as it is usually filled with seeds, so you have the idea that seeds from one half are transferred to the other half – or in some senses shared.

The double gourd is a Chinese emblem of Li T’ieh-kuai, the second of the Eight Immortals, Li T’ieh-kuai was, in effect,  a mythic figure whose essential characteristic was his ability to leave his body and visit heaven.  He was also symbolised by a column of smoke.  But this symbol of the twin gourds or pumpkins is very far from being limited to the Far East; it was also common in the West.  Among other representations, the frontispiece of Book II of Maier’s work on alchemy, Symbola Aureae Mensae 1617, shows us the twin pumpkin in the form of two amphora.