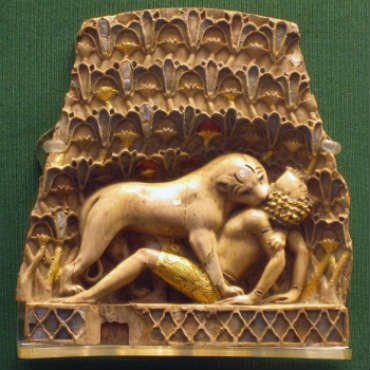 A type of rebirth experience in which the person having the spiritual experience feels themselves and usually sees themselves,  to be consumed – eaten and then reconstituted.

The person may feel they are being  consumed by leopards, lions, or large birds such as eagles, ravens or vultures.  The body is effectively ‘stripped clean’  and then put back together again.  The person must feel a sense of consumption by the huge creature that attacks them followed by a feeling that what is them has somehow been reconstituted into a new them.

The symbolism is the same as with all rebirth experiences in that it symbolically shows the reconfiguration of the person’s functions with the removal of unwanted functions and the addition of new needed functions.  The purpose is to make the person fit for a new role within the spiritual world connected with their destiny.

Instead of the process being a long slow gentle one however, it is completed within one visionary experience and is thus traumatic, as the removal of the functions and addition of new ones can be felt physically and real pain ensues.

The Composer simply adds images suited to the degree of reconfiguration that has had to take place.  If the person is lucky they simply become unconscious during the worst parts, if they are not lucky they symbolically see and experience every step of the process.

It is worth noting that this is the origin of the ‘Sky Burial’ which is a ritual physical act to celebrate the spiritual actions.