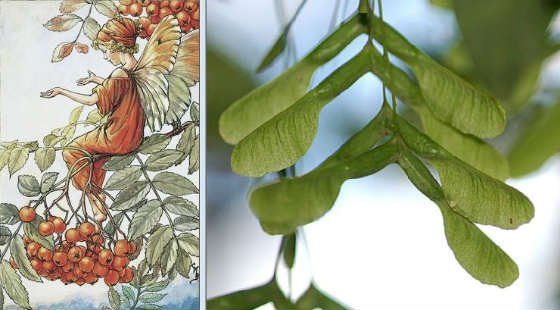 The ash tree has a special place in mythology representing as it does the Tree of Life in many cultures. In Norse mythology, the World Tree Yggdrasil is an ash tree. Elsewhere in Europe, "snakes were said to be repelled by ash leaves or a circle drawn by an ash branch".  This superstition derives from Norse mythology too.  In Greek mythology, the Meliai were nymphs of the ash, again representing the Tree of Life.

The Ash tree is a very large tree when full grown and thus is large enough to be a good symbol for the Tree of life and it is also long lived.  But what marks the Ash tree out is that its seeds are like little winged creatures.  In effect the symbolism becomes perfect for a Tree of life having millions of winged souls hanging from its branches.  In Autumn when the leaves fall, the seeds are often left there just hanging from the tree.   A tree full of angels.

In contrast the Mountain Ash shares none of this symbolism, but it was regarded as a tree for protecting a house from ‘evil spirits’.  The reason is probably quite prosaic, but useful to know.

The mountain ash's other name is Rowan, and its berries are known as Rowanberries.    The berries are rich in vitamin C, as well as other nutrients,  so may have helped stave off disease in the past.   The Mountain ash was known as the witch's tree, but as we know the name witch only started to be used when established religious institutions were seeking power.  Witches could be healers, as such the more correct name for the Rowan tree would be the Healer's tree.  Given that Viruses, bacteria and fungi are all kept at bay by foods with high nutritional value, the use of the Rowen would have been excellent healing practise.

Mountain ash was also used to make dowsing rods to find ores.  Its usefulness as a tree as well as its symbolic associations, has resulted in it being incorporated in the coats of arms of the German municipalities Ebernhahn, Eschenrode, and Hermsdorf, and of the Vysočina Region of the Czech Republic. Rowan is also part of the coat of arms of the Metropolitan Borough of Wigan and the logo of the Wigan Warriors.