Cymatics, from Greek: κῦμα, meaning "wave", is a subset of modal vibrational phenomena. The term was coined by Hans Jenny (1904-1972), a Swiss follower of the philosophical school known as anthroposophy. Typically the surface of a plate, diaphragm or membrane is vibrated, and regions of maximum and minimum displacement are made visible in a thin coating of particles, paste or liquid. Different patterns emerge in the excitatory medium depending on the geometry of the plate and the driving frequency.

The apparatus employed can be simple, such as the Chinese spouting bowl, in which copper handles are rubbed and cause the copper bottom elements to vibrate. Other examples include the Chladni Plate [named after the German musician and physicist Ernst Chladni] and the so-called cymoscope.

When a plate is sprinkled with a fine dust (e.g., lycopodium powder, flour or fine sand) and subjected to a single tone sound, the  powder moves due to the vibration and accumulates progressively in points of the surface corresponding to the sound vibration. The points form a pattern of lines, known as nodal lines of the vibration mode. 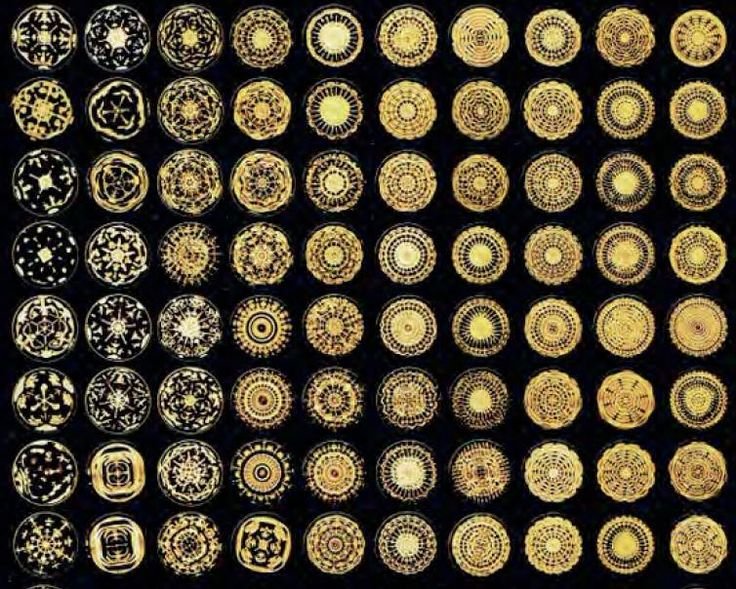 Galileo Galilei
The universe cannot be read until we have learnt the language and become familiar with the characters in which it is written. It is written in mathematical language, and the letters are triangles, circles and other geometrical figures, without which means it is humanly impossible to comprehend a single word.

The creation of the universe, these patterns and the use of sound are all related

Nikola Tesla
If you want to find the secrets of the universe, think in terms of energy, frequency and vibration

Sacred geometry was preserved throughout history in Freemasonic circles since it was believed to be important knowledge revealing the secrets of our universe. The secret of sacred geometry is that vibrations (sounds) form on geometrical patterns. Goethe reputedly said that indeed "geometry is frozen music". Music is geometry and geometry is music! The basis of the universe is form and pattern.

Sounds are able to produce psychic, psychological, or emotional effects and also freeze water, kill a man or break down walls as in the biblical legend of Jericho."