(a) not need a cell wall (like plants & bacteria) to protect membrane integrity/cell-viability and thus be able to
(b) change shape and
(c) move about (unlike bacteria and plant cells which are restricted by their cell walls).

In addition to its importance within cells, cholesterol also serves as a precursor for the biosynthesis of steroid hormones, bile acids, and vitamin D. Cholesterol is the principal sterol synthesized by animals. All kinds of cells in animals can produce it. In vertebrates the hepatic cells typically produce greater amounts than other cells. 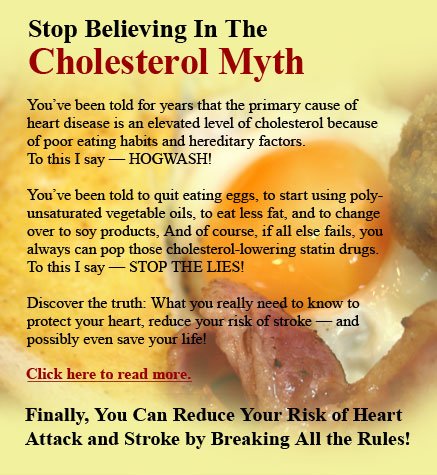 Not my photo, but it seems that the message is starting to sink in elsewhere too

Without cholesterol we may become infertile, our sex drive may lower, and we will be Vitamin D deficient.

Vitamin D deficiency causes a whole host of problems in its own right including mental problems, depression, nervous system problems, immunological problems and as a consequence disease like cancer.  And I am not scaremongering, because I am not given to scaremongering.  Cancer is caused by pathogens, thus if you compromise your immune system you run the risk of getting cancer.

Thus follow the cause effect chain through and any attempt to suppress cholesterol opens us up to a barrage of problems.

Cholesterol is a vital component of mammalian cell membranes, strengthening the membrane at high body temperatures.  Thus it is key to all repair work of the cell.  Without cholesterol, the cells will break down and die under any form of heat stress.  It is thus also vital in the body’s fight against pathogens.  The body fights some pathogens using heat, as such if the cells are unable to withstand heat because of low cholesterol, the pathogens will take a hold.

Without cholesterol, our cells gradually die, we age and our muscles cease to function.  We become stiff, our heart starts to pack up and we die.  Sooner rather than later.

It is totally wrong to accuse cholesterol of being a contributor to heart disease, for example, or atheroscleorosis.  Both these diseases are caused far more by toxins, heavy metals, bacteria, viruses, vaccines, pharmaceuticals, fungi, parasites and all the other sorts of pathogen that enter our blood stream via, for example, a compromised gut [caused by pharmaceuticals] or a vaccination needle.

The original research on which cholesterol was outlawed, made a very tenuous link between the existence of high cholesterol and heart disease.

But this is like saying you have noticed that every time a train is late in the station the stationmaster comes out, so it is important you shoot the station master because he is obviously the cause of the late train.

The whole logic on which cholesterol has obtained a bad name was flawed.

If cholesterol is there, it is a symptom, and it is probably a symptom of the fact we have pathogens in our body which need to be removed.

Maybe, just maybe, the pathogens are there because, to use the same train analogy, the fat controller decided to take antihistamines and antibiotics which broke down all the defences of the train network allowing the virus and bacteria vandals to enter – destroying points, lines and track, not to mention the signal boxes.