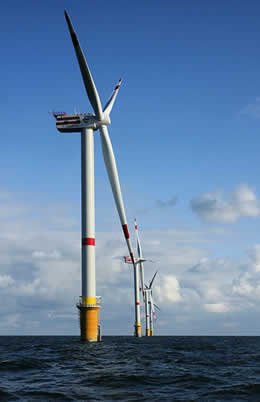 A wind turbine is a device that converts kinetic energy from the wind into mechanical energy. This mechanical energy can then be used to produce electricity and these are more correctly called  wind generators to distinguish them from wind turbines used to drive machinery [windmills or wind pumps].

And wind turbines produce infrasound.  If you work, live or are based near a wind turbine the infrasound is classified as high intensity, further away it is lower intensity.

Infrasound resonates the organs of the body, it shakes them.  Whether it resonates an organ in our body or not depends on the resonant frequency of the organ itself.  Because our organs differ in size between people, the effects appear arbitrary.  One person may be affected whilst another person may not.   Infrasound appears to affect the smaller organs in the brain and many of the smaller organs of the regulating systems such as the thyroid glands.

The effects on health in general seem to be the primary concern amongst the medical profession and scientists, especially for those subjected to high intensity exposure.  But spiritual experiences of a sort  - both hallucinations and visions  - are not uncommon.  Generally speaking these tend to be negative in the extreme, with cases of utter despair accompanied by hallucinations of demonic figures.  As such wind turbines pose something of a challenge to both governments and the population as a whole.

Where wind turbines get sited depends commercially on the wind energy available at a location.  Commercial companies use a figure called the Wind Power Density (WPD) to decide whether it is worth creating a wind farm there.  The WPD is a calculation of the mean annual power available per square meter of swept area of a turbine, and is tabulated for different heights above ground. It is affected by both wind velocity and air density.

In the United States, the results of these calculations are included in an index developed by the U.S. National Renewable Energy Lab and referred to as "NREL CLASS." The larger the WPD calculation, the higher it is rated by class. Classes range from Class 1 (200 watts/square meter or less at 50 meters altitude) to Class 7 (800 to 2000 watts/square meter). 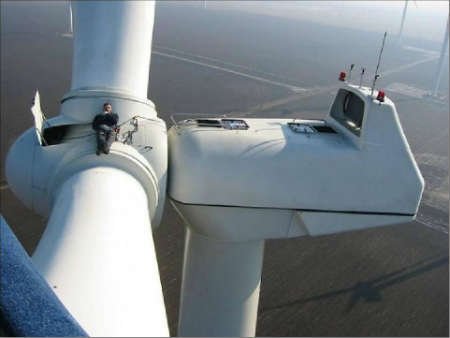 There are a huge number of different sorts of designs with vertical axes and horizontal axes, helical blades, propellors and so on.  They can be extremely large or very small depending on their application.  Turbines used in wind farms for commercial production of electric power are usually three-bladed and pointed into the wind by computer-controlled motors. The blades range in length from 20 to 40 metres (66 to 130 ft) or more. The tubular steel towers range from 60 to 90 metres (200 to 300 ft) tall. The blades rotate at 10-22 revolutions per minute.

The infrasound is produced by the rotation of the blade but also the turbulence that occurs round such large structures.  Often wind farms contain turbines sited fairly close together, thus the turbulence is increased.   Since a tower produces turbulence behind it, the turbine is usually positioned upwind of its supporting tower. Turbine blades are made stiff to prevent the blades from being pushed into the tower by high winds. Additionally, the blades are placed a considerable distance in front of the tower and are sometimes tilted forward into the wind a small amount.

Downwind machines have been built, despite the problem of turbulence (mast wake), because they don't need an additional mechanism for keeping them in line with the wind, and because in high winds the blades can be allowed to bend which reduces their swept area and thus their wind resistance. Since cyclical (that is repetitive) turbulence may lead to fatigue failures, most HAWTs are of upwind design.  This should tell us a lot about the amount of vibration produced and its long term effects.

Intensity is dependent on just how many turbines have been sited on a farm and also how far you are from the farm.  If you are near, or even in amongst, the farm the intensity is very high.

In most cases, the intensity is so high that the health problems far outweigh any ‘spiritual experiences’ – mostly hallucinations, that result from exposure.

I have included some scientific papers explaining the health concerns as well as those describing the hallucinations, as to me negative health effects are in a sense just as 'spiritual' [in that our functions are being affected] as an hallucination or a vision.