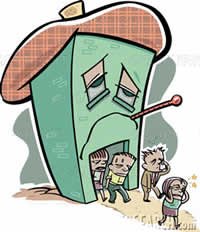 Although this section has been called modern buildings, I have subsequently discovered that many large buildings used as offices, warehouses, schools, factories, processing plants and so on can provoke experiences, they do not have to be 'modern' as such, just have similar problems.  Initially I used the word modern, as it seems to be a feature of high rise, double glazed, poorly ventilated buildings with a high prevalence of modern 'artificial' materials in their construction and use.

People have had hallucinations and strange 'feelings' and the building then gets labelled as a 'Sick Building' and, indeed, it is not a bad description, because these buildings over time can make people sick.

There is not one cause, it appears there are a number of possible causes:

Fungus - large badly ventilated buildings that have large areas which are not cleaned, or are inacessible to be cleaned - like air conditioning vents - can harbour fungus and these fungi have been shown to affect health.  Thus many experiences here are a knock on effect from the health problems, for example:

The following is a review of some of the work we have done since 2004 regarding the importance of molds and their mycotoxins in the phenomenon of sick building syndrome (SBS). In these studies we showed that the ... mycotoxins (MTM) of Stachybotrys chartarum (SC) are easily ... spread in buildings ...SC and Penicillium chrysogenum (PC) colonies remain viable long after a water source has been removed, and the mycotoxins produced by SC remain toxic over extended periods of time. ...PC when inhaled, can release in vivo, a protease allergen that can cause a significant allergic inflammatory reaction in the lungs of mice. ... the same phenomenon actually occurred in SC infested buildings where people were complaining of health problems... we were able to demonstrate the presence of MTM in the sera of individuals who had been exposed to SC in indoor environments. PMID: 19854820

Toxins - the next major cause is the fumes from cleaning products used in the building, plastics, paints, and a host of substances which can not only make people ill, but also make them light headed enough that they start hallucinating.  In some respects a person is, without realising it, Inhaling volatiles and gases.  For example

Static electricity -  There can be quite a build up of static electricity in buildings with carpets that are able to hold and generate charge and which are walked on by large numbers of people.  If you are getting a shock from the door handles in your office, then you have high static electricity and that is a known producer of experiences.

LF Magnetic radiation both large scale industrial and domestic scale  - computers and all sorts of electrical equipment give off radiation and this is a known promoter of experience as well as a known health hazard.

Stress - the battery chicken like atmosphere and layouts of some working environments, coupled with the noise, lighting and pressure of the environment, simply produced high levels of stress, which is a known producer of spiritual experiences as well as a major contributor to declines in health.

Resonance - Wind acting on high rise office building produces turbulence, turbulence can produce infrasound and infrasound is a very effective producer of spiritual experiences via stimulation via resonance.  It is also possible for infrasound to be present within a building generated from electric fans, air conditioning systems, or simply via air flowing down long corridors unbroken by any furniture.

Hypoxia - After the energy crisis of the 1970s, the emphasis was placed on the need to conserve heat and the solution was to construct sealed buildings without natural ventilation. Not surprisingly, lower levels of air exchange in these environments led to an increase in indoor air pollutants – carbon dioxide and smoke [when people smoked at work].  The more people in the work-place, the more 'efficient' the closed system and the more like a battery chicken farm it is, the more likely it is that the people are suffering from hypoxia.  Furthermore the more machines there are, the worse the problem....

PCs are an important, but hitherto overlooked, source of pollution indoors. They can decrease the perceived air quality, increase SBS symptoms and decrease office productivity. The ventilation rate in an office with a 3-month-old PC would need to be increased several times to achieve the same perceived air quality as in a low-polluting office with the PC absent. …. The fact that the chemicals identified in the office air and in the chamber experiments were insufficient to explain the adverse effects observed during human exposures illustrates the inadequacy of the analytical chemical methods commonly used in indoor air quality investigations. For certain chemicals the human senses are much more sensitive than the chemical methods routinely used in indoor air quality investigations. PMID: 15104785

Others - I'm sure that in time the association will also be made with bacteria and viruses floating round these buildings, but as yet, the papers on Pubmed indicate that little research has been done in these areas.  I have a new found sympathy for all those call centre workers who ring me up at inconvenient times trying to 'help' me with accidents I have never had; they are probably as sick as the buildings they work in. 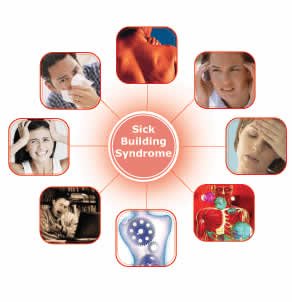 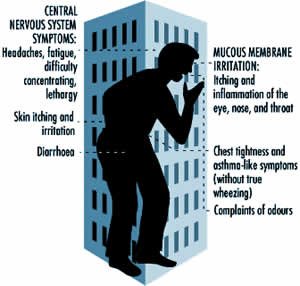 Stimulation via resonance as well as Hypoxia.   In addition all the illnesses these causes produce will also be the cause of experiences in their own right. 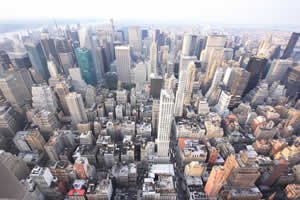 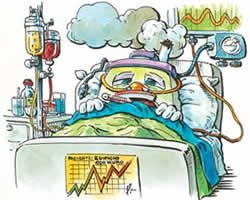