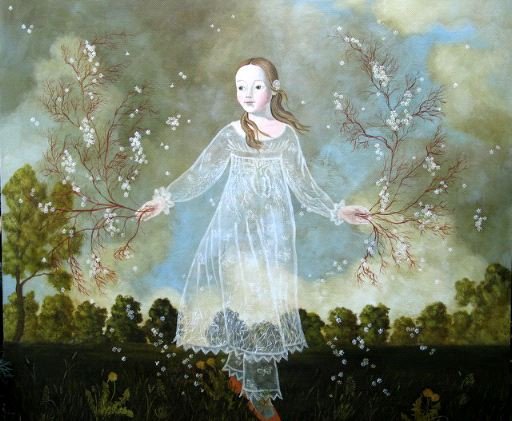 Infertility has  a cause and a doctor who is on the ball will investigate the cause before ever treatment is offered.

Many many of the causes can be addressed.

Infertility of both men and women has risen dramatically over the past 50 years.  In my youth, our biggest concern was how to prevent a baby, now it appears to be why  babies are not appearing.  The following chart shows this trend.  It comes from eHealthme, and shows the trend [not the total number of infertile people in the USA}.

Yet we don't ask why.  This is because doctors are still not investigating the cause of the infertility, but it is also because our environment is gradually becoming more and more toxic.
Babies do not appear to people who are old physically and ill.
Nature makes sure that a person who, through an illness or disease they may not realise they possess, does not produce a baby - a baby who may end up very ill or disadvantaged because of that illness.  By circumventing the protection, Nature provides us, and more importantly our baby,  with, we can end up giving birth to a baby who is very ill. Infertility is actually Nature's way of telling us we are actually sick. 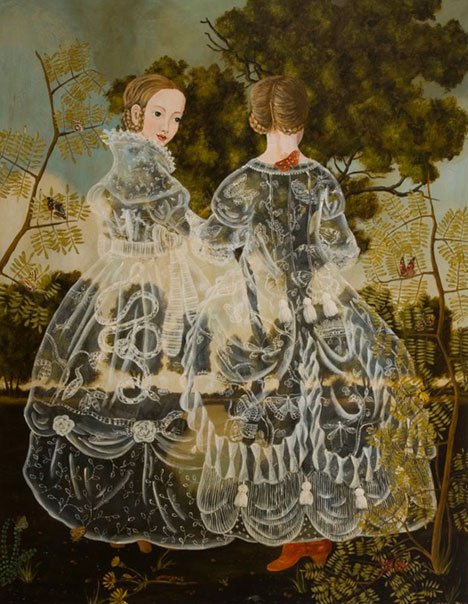 In vitro fertilization (IVF) and other assisted reproductive technologies (ART) are .. widely provided at infertility clinics. .....some studies have suggested an excess occurrence of major malformations, low birth-weight and other perinatal complications in babies conceived by ART. Further, it was recently reported that IVF and intracytoplasmic sperm injection (ICSI) are associated with imprinting disorders in the offspring such as Beckwith-Wiedemann syndrome and Angelman syndrome.PMID: 15904430

The role of pharmaceuticals in infertility

One major cause of infertility is pharmaceuticals.  When asked, a doctor may well say that yes indeed drugs do cause infertility, but what is rarely recognised is that drugs of all kinds, legal and illegal, cause infertility. For example: 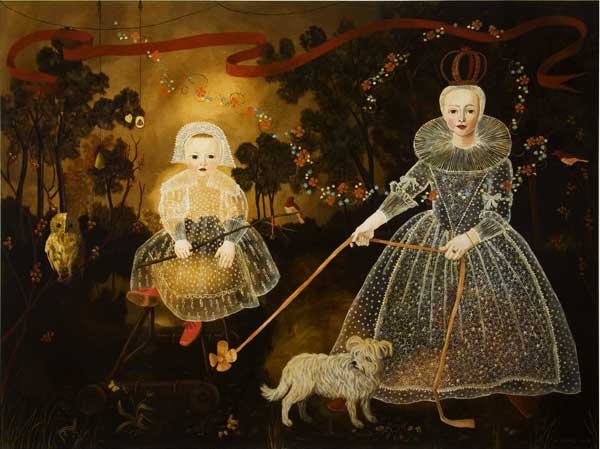 We review the adverse effects on genitourinary and sexual function associated with antidepressants, neuroleptics, lithium, and benzodiazepines, ……We find that genitourinary function, including effects on continence and flow, and sexual function, including libido, erection, ejaculation and orgasm, may be altered by psychotropic administration. PMID:  1363418

Prescribed medicines and vitamin supplements, dietary supplements, folic acid in our bread, added vitamins to cereals, the chemicals added to water, all are toxic because they are at overload proportions to our needs and furthermore in some cases are simply toxic to the body.

This LINK shows you all the chemicals - the pharmaceutical products that are known to cause infertility.  In that list are vitamins supplements.

Diethylstilbestrol ( stilboestrol) is an endocrine disruptor. Human exposure to DES occurred and still occurs through diverse sources, such as dietary ingestion from supplemented cattle feed. From about 1940 to 1971, DES was given to pregnant women in the mistaken belief it would reduce the risk of pregnancy complications and losses.  It didn't.  So we can conclude that the medical profession are also a cause of infertility - as are farmers.

Certain contraceptives can cause long term problems with both fertility and the health of the baby.  A study of accidental pregnancies among poor women in Thailand found that infants who had been exposed to Depo-Provera during pregnancy had a higher risk of low birth weight and an 80% greater-than-usual chance of dying in the first year of life. 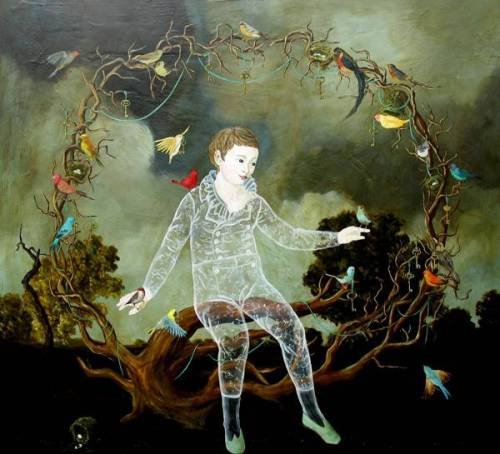 Hyperprolactinaemia  is the presence of abnormally high levels of prolactin in the blood ....and a frequent but often neglected side effect of typical, but also of many atypical antipsychotics such as amisulpiride, risperidone or ziprasidone.
Besides galactorrhoea, potential consequences are suppression of the hypothalamic-pituitary-gonadal axis with hypogonadism, sexual dysfunction, infertility and in women also irregularities of the menstrual cycle and amenorrhoea. Potential long term consequences are mainly osteopenia and osteoporosis with an enhanced risk of fractures.  PMID: 19573500

If we look at the list of conditions correlated with infertility on eHealthme we can see an interesting link between certain conditions and the drugs to treat them.  In effect it is not the condition that causes the infertility it is the drug given to address the symptoms - antidepressants, ADHD drugs, acne treatments, epilepsy drugs, immunosuppressants, and more. 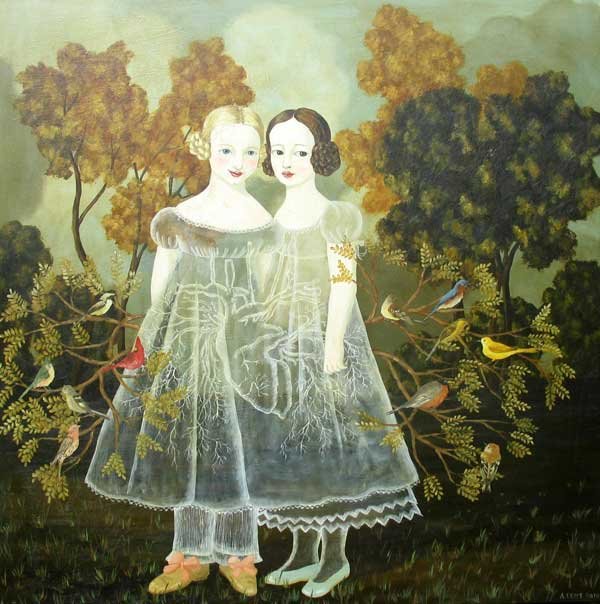 In simplistic terms there are two courses of action in treating infertility symptoms as opposed to investigating the cause.

The Centers for Disease Control and Prevention (CDC)
ART includes all fertility treatments in which both eggs and sperm are handled. In general, ART procedures involve surgically removing eggs from a woman's ovaries, combining them with sperm in the laboratory, and returning them to the woman's body …...  They do not include treatments in which only sperm are handled 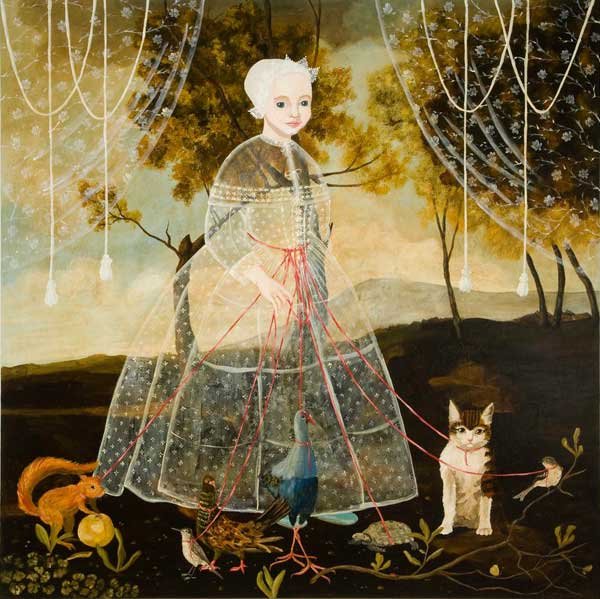 In effect there are drugs to increase the fertility of the woman, and also drugs that help in the removal of eggs ready for in vitro fertilisation.

As this section is intended to deal principally with medicines - drugs - and their ability to produce hallucinations and deaths, the two main forms of spiritual experience, the effects of ART itself will not be pursued here.

But it is worth adding the following extract which we believe to be most helpful in its summarised conclusions.

Genetics Committee, the Reproductive Endocrinology and Infertility Committee, the Executive and Council of the Society of Obstetricians and Gynaecologists of Canada and the Board of the Canadian Fertility and Andrology Society.  March 2006

2. All men with severe oligozoospermia or azoospermia should be offered genetic/clinical counselling for informed consent and offered karyotyping for chromosomal abnormalities before attempting IVF-ICSI. ...

3. Couples exploring IVF-ICSI when the man has obstructive azoospermia should be offered genetic/clinical counselling for informed consent and offered genetic testing for alterations in genes associated with cystic fibrosis (CF) before attempting IVF-ICSI. (II-2A) 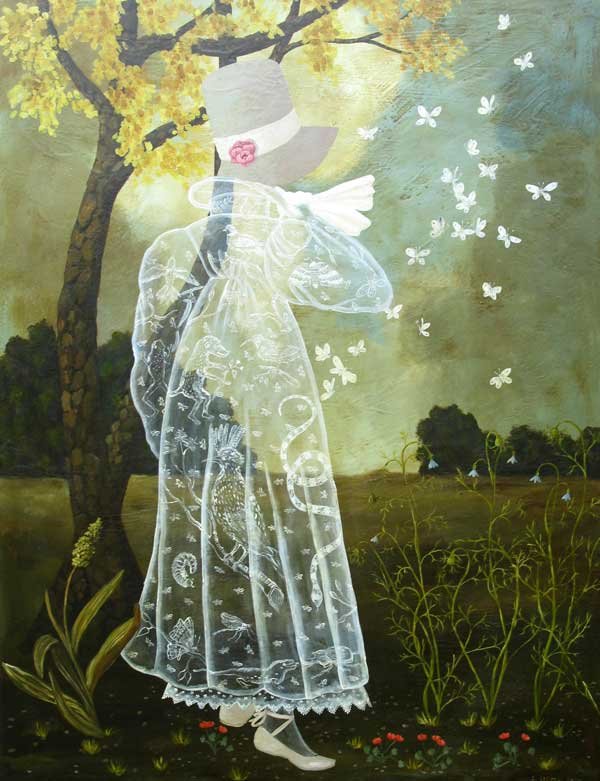 4. Pregnancies achieved by ovarian stimulation with gonadotropins and intrauterine insemination are at higher risk for perinatal complications, and close surveillance during pregnancy should be considered. It remains unclear if these increased risks are attributable to the underlying infertility, characteristics of the infertile couple, or use of assisted reproductive techniques. Multiple gestations remain a significant risk of gonadotropin treatment. (II-2A)

5. Pregnancies achieved by IVF with or without ICSI are at higher risk for obstetrical and perinatal complications than spontaneous pregnancies, and close surveillance during pregnancy should be considered. It remains unclear if these increased risks are attributable to the underlying infertility, characteristics of the infertile couple, or use of assisted reproductive techniques. (II-2A)

6. Women undergoing ART should be informed about the increased rate of obstetrical interventions such as induced labour and elective Caesarean delivery. (II-2A) 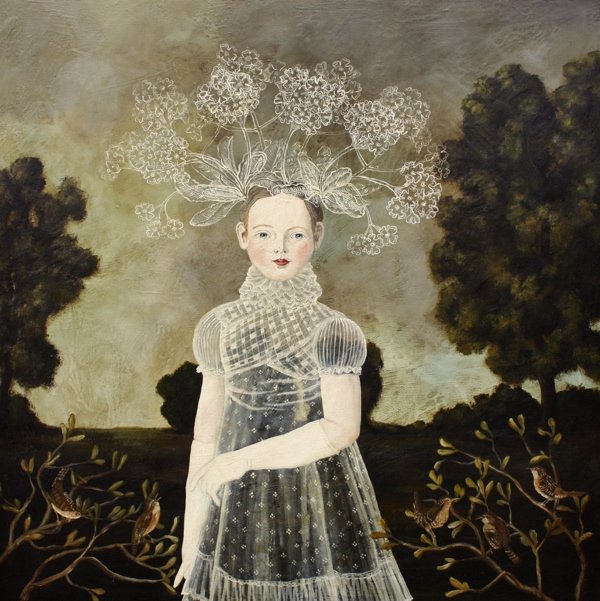 8. Singleton pregnancies achieved by assisted reproduction are at higher risk than spontaneous pregnancies for adverse perinatal outcomes, including perinatal mortality, preterm delivery, and low birth weight, and close surveillance during pregnancy should be available as needed. (II-2A)

11. To reduce the risks of multiple pregnancies associated with ART and to optimize pregnancy rates, national guidelines should be developed on the number of embryos replaced according to characteristics such as patient's age and grade of embryos. (II-2A)

12. Further epidemiologic and basic science research is needed to help determine the etiology and extent of the increased risks to childhood and long-term growth and development associated with ART. (II-2A) 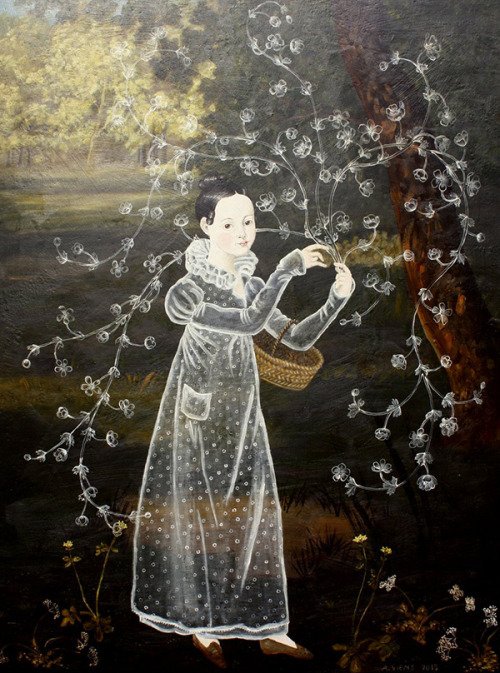 13. Discussion of options for prenatal screening for congenital structural abnormalities in pregnancies achieved by ART is recommended, including appropriate use of biochemical and sonographic screening. (II-2A)

14. Further epidemiologic and basic science research is needed to help determine the etiology and extent of the increased risks of congenital abnormalities associated with ART. (II-2A)

15. Couples considering IVF-ICSI for male-factor infertility should receive information, and if necessary formal genetic counselling, about the increased risk of de novo chromosomal abnormalities (mainly sex chromosomal anomalies) associated with their condition. Prenatal diagnosis by chorionic villus sampling (CVS) or amniocentesis should be offered to these couples if they conceive. (II-2A)

16. Further epidemiologic and basic science research is needed to help determine the etiology and extent of the increased risks of chromosomal abnormalities associated with ART. (II-2A) 17. Discussion of options for prenatal screening and testing for aneuploidy in pregnancies achieved by ART, adapted for maternal age and number of fetuses, is recommended, including appropriate use of biochemical and sonographic screening. (II-2A)

18. The precise risks of imprinting and childhood cancer from ART remain unclear but cannot be ignored. Further clinical research, including long-term follow-up, is urgently required to evaluate the prevalence of imprinting disorders and cancers associated with ART. (II-2A)

19. The clinical application of preimplantation genetic diagnosis must balance the benefits of avoiding disease transmission with the medical risks and financial burden of in vitro fertilization. Further ethical discussion and clinical research is required to evaluate appropriate indications for preimplantation genetic diagnosis. (III-B). PMID: 16650361 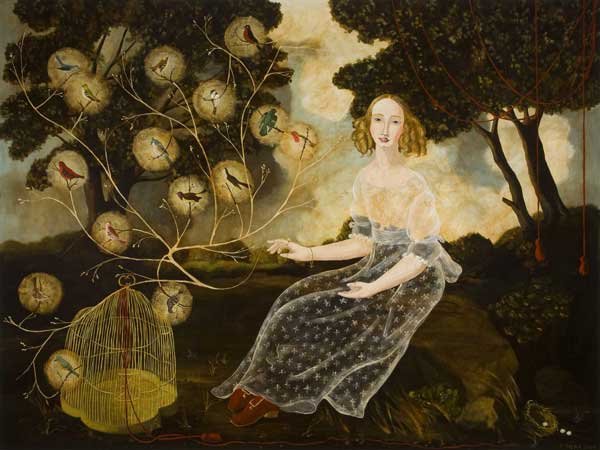 A whole host of types of drugs are used in this area and the majority are based on the female reproductive cycle, for example:

These medications may be administered intranasally, by injection, or by implant, as well as some that are ingested [by mouth]. Injectables have been formulated for daily, monthly, and quarterly use, for example, and implants can last from 1 to 12 months [or more].

Research in male fertility medication is currently ‘ongoing’, most of it based on improving sperm count and sperm motility. 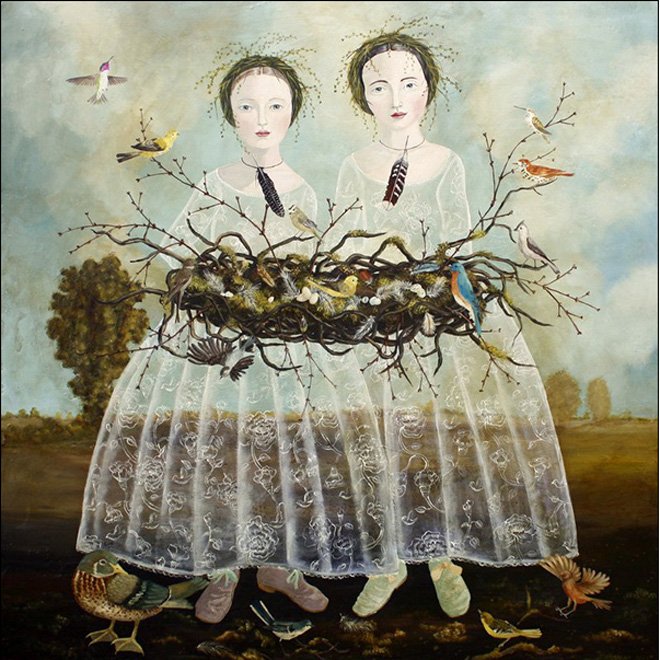 Because of the very varied nature of the types of drug used in this area, there are no typical side effects, thus we will provide some example drugs and their side effects using the eHealthme site and the summaries of Adverse Drug reports submitted by doctors to the FDA and SEDA.
Most common Cetrotide side effects:

Most common Clomid side effects: 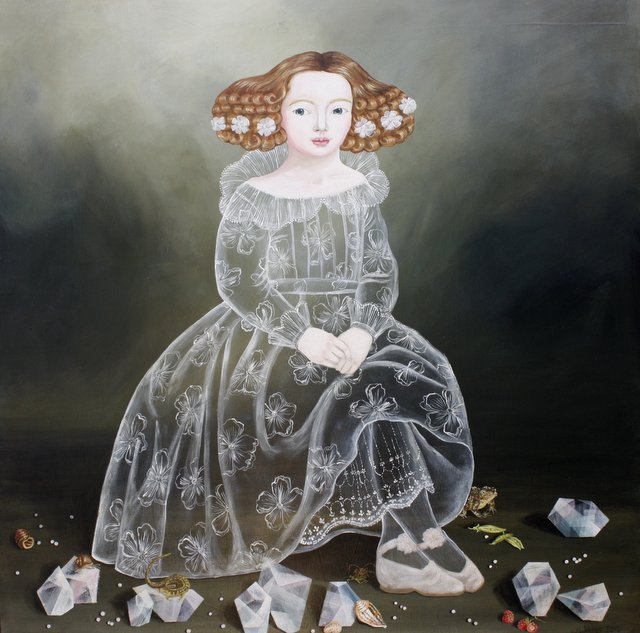 Most common Luveris side effects:

Leuprorelin and its trade names 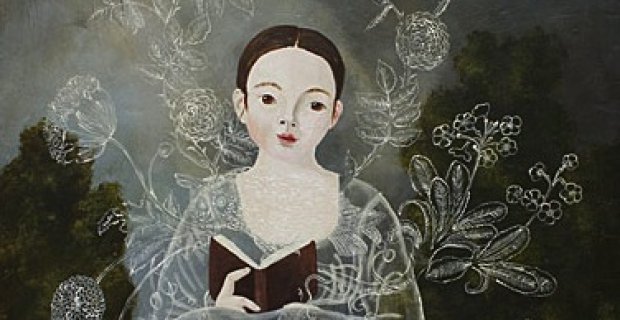 The paintings on this page are by Anne Siems - webpage LINK 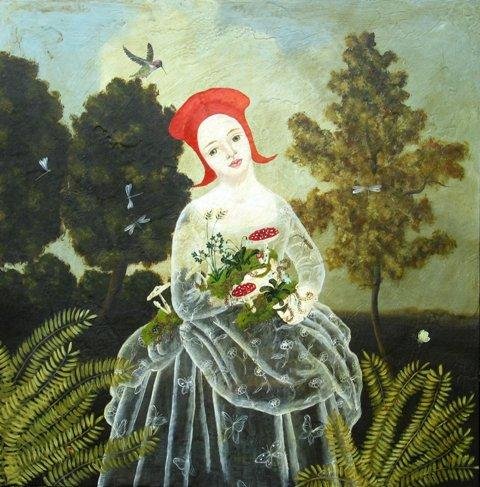 Separation of the drugs by type and discussion of the purposes of each drug is outside the scope of our site, as we wish to simply show the hallucinations or deaths – spiritual experiences - that might be caused by these drugs.  Thus the table that follows may appear to be a bit of a mixture combining as it does Gonadotrophin releasing hormone agonists and antagonists, menotropins, LH preparations,  FSH preparations, aromatase inhibitors, hMGs and so on.

Even if a drug has not produced any hallucinations, we have added to this list in order that you can still follow the link to eHealthme to get the side-effects.