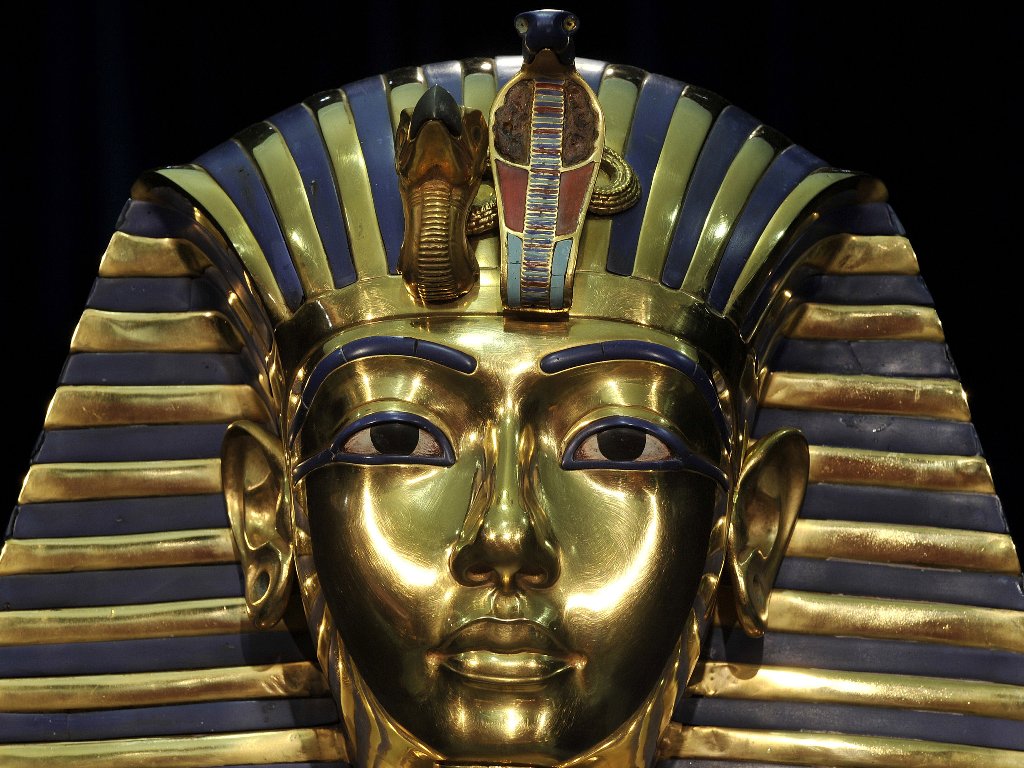 This activity is probably the most dangerous on the site.  We have only one observation, but once you read that observation you will realise not only why there is only one, but also how important this entry is.

It involves either the smoking or ingesting of cobra venom.  It does NOT involve being bitten by a Cobra.

The person who attempted this was guided by a specialist Hindu 'monk'/guru and present was a doctor.  Furthermore, although the description appears to suggest that the person drank cobra venom in milk flavoured with honey, a good deal more was involved and the secret of what else has to be done, stays with the people who are able to help people prepare for this and see them safely through it. 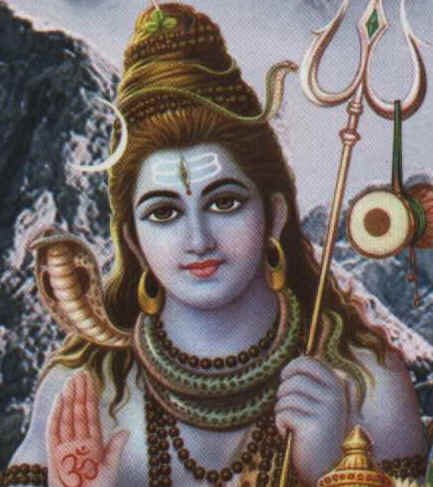 Too many symbols to count - cobra, hair, beehives, necklaces, trident....
The god Shiva

Naja is a genus of venomous elapid snakes.   Although there are several other genera that share the common name, Naja are the most recognized and most widespread group of snakes commonly known as cobras. The genus Naja consists of 20 to 22 species, but has undergone several taxonomic revisions in recent years.  They range throughout Africa, the Middle East, India, southeastern Asia, and Indonesia.

In spite of their reputation, Cobras are not especially aggressive snakes. They have been kept in captivity for over a hundred years and the number of bites from captive Cobras is extremely small. They often take pre-killed rodents as food and become docile very quickly. 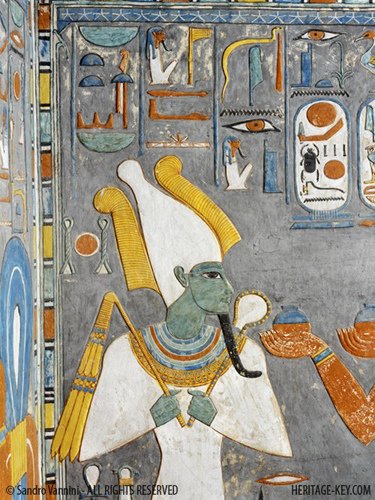 Knowledge of the spiritual efficacy of venoms has been known for thousands of years.  The cobra, for example, was sacred not just in India, but in ancient Egypt too.  The photo above of Tutankhamun shows the cobra in the headdress.  The headdress is also styled to be the shape of a cobra’s hood.

The only problem we have here is that the Cobra is also a symbol.  The Cobra combines the symbol of the Snake and the Halo.  Generally speaking, but more particularly in Ancient Egyptian symbolism it was the insignia of a god.  This means we do not know whether Tutankhamun's headdress simply signified his status as a deity, or whether he had used [and maybe died from] snake venom.

There is a school of thought that says that it could be both.  It is based on the hypothesis that the headdresses and clothes of Egyptian pharaohs were designed to indicate which method they used to get to the spirit world. 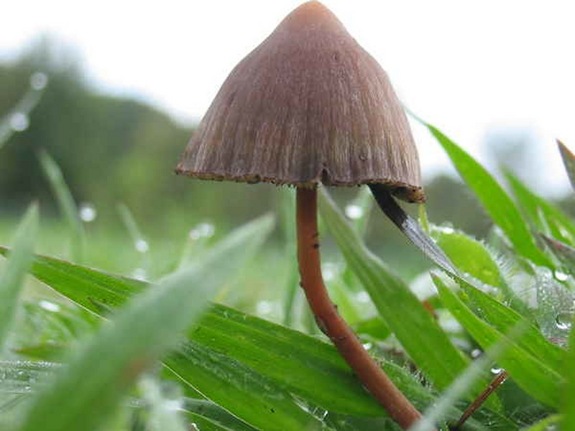 The headdress above left incorporates a great deal of symbolism - the twin horns and the jester, the crook and flail, but the centre headdress also seems to incorporate a bit more in its shape and bears an uncanny resemblance to a psilocybe mushroom!

In effect, the paintings of the pharaohs are both symbolic and, as it were, autobiographical - 'this is the rank of this god, and this is how he/she attained that rank'. 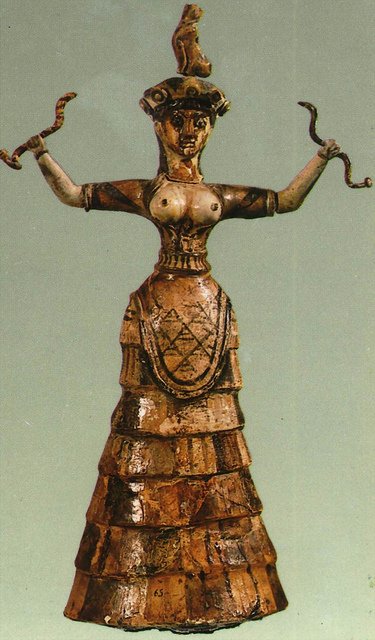 Knowledge of the properties of snake venom was not confined to India and Northern Africa.  It is not far by boat from North Africa to Crete, for example.

The ‘Snake Goddess’ of the Minoan culture shows  a woman holding a snake in each hand.  It was found during excavation of the Minoan archaeological sites in Crete and dates from about  1600 BC.

Some sources have linked the figurine with a deity, but her staring eyes and headdress show her to be a ‘High priestess’ in ecstatic trance.

This may well indicate that snakes were used in the Minoan culture too, BUT the snake has an extensive symbolism of its own which might be in operation here. It may simply be an indicator of kundalini energy.

The whole figure is symbolically dressed - the soul cone, the 5 levels and layers, the apron, and either the Higher spirit perched on the top of her head, or her familiar - her guiding spirit or 'hob'.  There is also a form of crown.  As the dress is complex in its symbolism, little room was left for the final symbol - that of nakedness.

‘Goddesses' and 'gods' in ancient cultures were living people with great power. 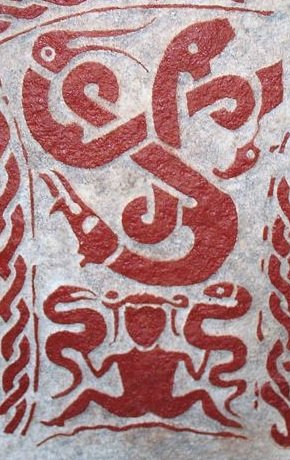 As a final example, to show that other venoms may have also been in use, we turn to Scandinavia.  The Snake-witch stone [right] shows a woman holding snakes in both hands.

It comes  from Gotland, Sweden. Again there are a number of possible explanations – the symbolic association with snakes and serpents is shown, for example, or the snake as a possible transport to the spiritual realm through its venom - or both.

As snakes are associated with the kundalini experience, there is the added symbolic and physical association of a person grappling with energy flows [spirit input and spirit output] to achieve balance. 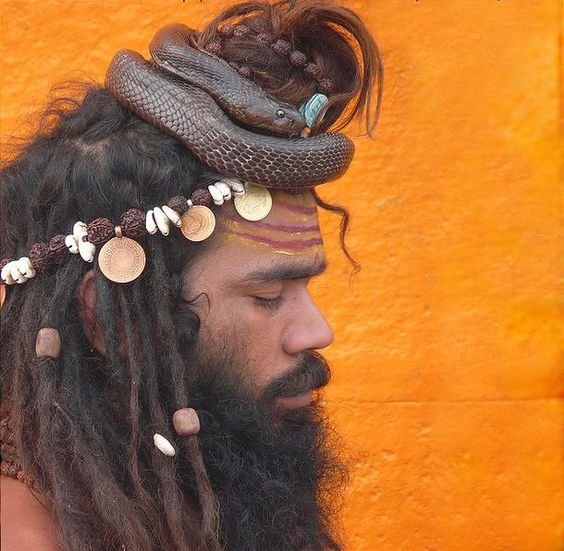 This site is not going to advocate or describe how cobra venom is prepared and used, but some background into its use may be helpful.

Those who use snake venom do not inject it, they either smoke it or ingest it.

Smoking anything, not just cobra venom,  produces a completely different profile for any substance, as depending on the heat of the pipe [or cigarrette], many substances may simply be burnt and never get to the body at all.

Although the smoking of snake venom appears to have only historical interest, on further examination we find this is not true.  Members of the Rajneesh movement are said to have put a drop of cobra venom on blotting paper, cut it into tiny sections, and smoked it.

[Note this term is used to refer collectively to persons inspired by the Indian mystic Osho (formerly known as Bhagwan Shree Rajneesh, 1931–1990), his disciples were known as Rajneeshees or "Orange People" because of the orange and later red, maroon and pink clothes they used from 1970 until 1985.]

Holy men in India are reported to smoke cobra venom for its psychoactive effects….  The dried venom glands or crystallised venom is often mixed with cannabis when smoked [ Richard Rudgley]

so there is anecdotal evidence.  None of this however tells us which cobra is used. 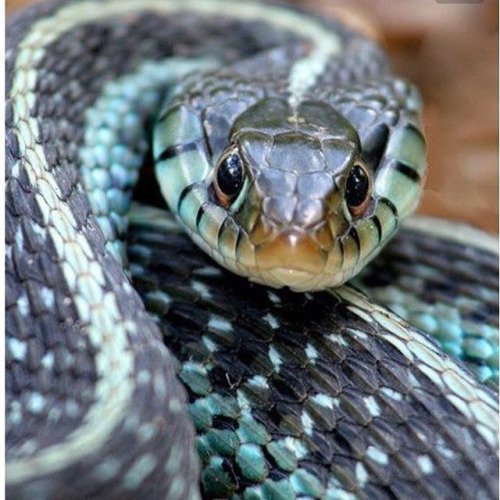 Although a cobra bite can kill, the ingestion of cobra venom does not have the same effect, to quote Wikipedia “snake venoms are generally not dangerous when ingested”.

It is generally recognized that cobra venom taken by mouth is non-toxic even when administered at doses that far exceed the lethal dose when given by injection. Large doses (130mg) of cobra venom administered orally to dogs gave no apparent signs of toxicity. Stomach irrigation with native cobra venom at 0.5mg/ml did not produce any adverse nor toxic effects for periods extending over 16 weeks which would imply gastric modification of the toxic components.

So something happens to the snake venom which changes it.

Clearly if ingestion is used the facilitator makes sure that there are no open sores in the mouth,  lips or in the lining of the throat or stomach, and no open wounds.

Again we emphasise the simple fact that with 22 different species of Cobra, no real analysis of what happens to the venom if ingested or what else goes into the concoctions given by gurus, this is, to say the least, extremely risky.

Given that being bitten by a cobra has a different profile, we have also included this section on cobra venom and what it does if you are bitten by a snake. 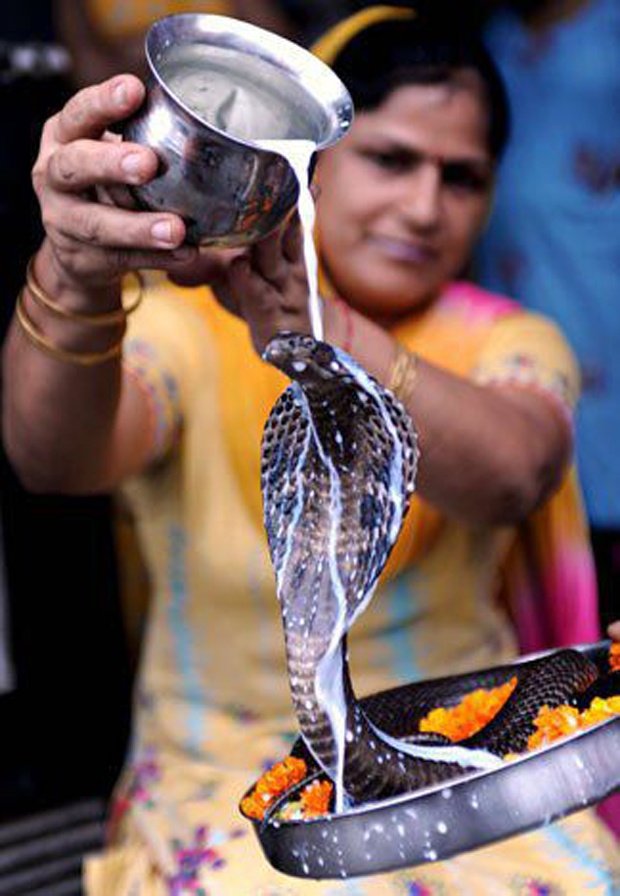 α-Cobratoxin is a substance of the venom of certain Naja cobras , such as Naja atra and Naja siamensis (the monocled cobra).  It belongs to the type II alpha-neurotoxin subfamily, which also includes alpha-bungarotoxin.  It is a muscle-type nicotinic acetylcholine receptor (nAChR) antagonist, which causes paralysis by preventing the binding of acetylcholine to the nAChR.  Cobratoxin binds to the ligand-binding pocket between the α/γ or α/δ nAChR subunits – causing paralysis. Long neurotoxins like Cobratoxin also block neuronal α7 nAChRs.

An important property of neurotoxins is that they are not able to cross the blood-brain barrier. Instead of this, they block the nerve transmission in the body. α-Cobratoxin is a post-synaptic neurotoxin, which reversibly blocks the nicotinic acetylcholine receptors. A bite of the Thailand Cobra, for example, leads to muscle paralysis. The lungs and the heart are both muscles.

The moment when the neurotoxin begins affecting the body can vary from minutes to a few hours after the bite. At first, the venom will cause weakness as a consequence of the nerve transmission blocking. The first real symptoms of paralysis will be palbebral ptosis (drooping of the eyelids) and external opthalmoplegia, which is also an eye movement disorder. The reason for this is that the ocular muscles are more susceptible, in comparison with other muscles, for the nerve transmission blocking.  Eventually the heart will stop and the lungs will become paralysed.

In one of the more ironic aspects of this, there is evidence that Cobra toxin has analgesic effects, and Cobra toxin has been shown to have a beneficial effect on CFA-induced arthritis by 'modulating the production of inflammatory cytokines' and in this case it is the  alpha(7)-nAChR that appears to mediate the anti-nociceptive and anti-inflammatory actions.

According to Clarkes’s ‘A Dictionary of Practical Materia Medica (1900), Cobrotoxin preparations, for example,  are indicated as homeopathic medications for; "angina faucium, angina pectoris, asthma, dysmenia (painful menses), hayfever, grief (depression), affections of the heart, headache (migraine), striction of the oesophagus, pain in ovaries (ovarian cysts), plague, spinal irritation (back pain) and sore throat "!  The analgesic properties are shown below

The following are all by Macht DI et al. 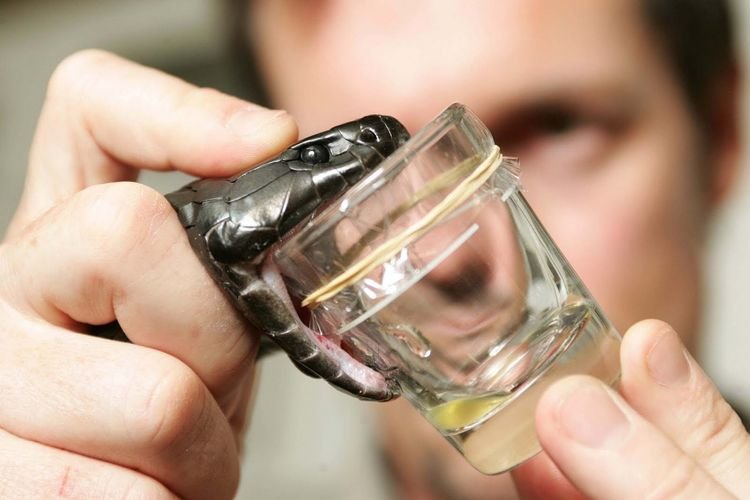