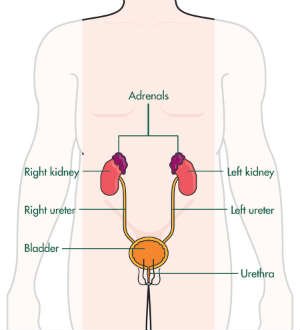 They are chiefly responsible for releasing hormones in response to stress through the synthesis of corticosteroids such as cortisol and catecholamines such as epinephrine (adrenaline) and norepinephrine. These endocrine glands also produce androgens in their innermost cortical layer. The adrenal glands affect kidney function through the secretion of aldosterone.

And diseases of the adrenal glands can cause spiritual experiences. 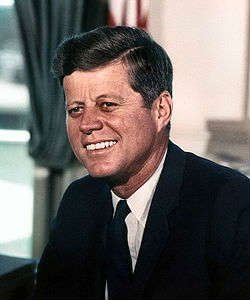 The principle disease that appears to cause experiences is Addison’s disease.  Addison’s disease (also Addison disease, chronic adrenal insufficiency, hypocortisolism, and hypoadrenalism) is a chronic endocrine disorder in which the adrenal glands do not produce sufficient steroid hormones (glucocorticoids and often mineralocorticoids).

It is characterised by a number of relatively nonspecific symptoms, such as abdominal pain and weakness, but under certain circumstances, these may progress to Addisonian crisis, a severe illness which may include very low blood pressure and coma.

Although adrenal insufficiency is considered a rare condition, recent epidemiological studies indicate a rising incidence of the disease. It may result from the presence of either primary adrenal disorder (Addison's disease) or of pituitary pathology. Addison's disease can present as an isolated entity or in combination with other autoimmune diseases. The clinical manifestations of this syndrome are caused by the deficiency of glucocorticoids and mineralocorticoids, which is often accompanied by adrenal androgen depletion. Patients usually experience skin hyperpigmentation, asthenia, weight loss, salt craving, abnormal defecation dynamics, as well as abdominal pains. In some persons adrenal insufficiency may, however, manifest as a life-threatening crisis. Because the onset of symptoms is gradual while its manifestation is sometimes non-specific, the correct diagnosis may be easily missed. At the present time, there is no absolute agreement among endocrinologists about the optimal management of this condition.  PMID:  23289256 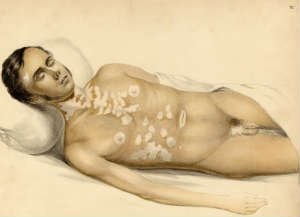 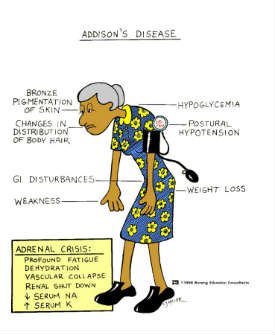 The condition arises from problems with the adrenal gland, primary adrenal insufficiency.

The current medical opinion on this says that Addison’s disease “ can be caused by damage by the body's own immune system, certain infections, or various rarer causes”.  And indeed it is classified as an autoimmune disease.

But the body does not attack itself.  There is no such thing as an autoimmune disease - the body is responding to something, although as the entire medical community [sorry if I exaggerate] appear to concentrate on symptoms and not causes, the causes - not all of them anyway - have not been identified.  But here is a summary of what I have managed to find are the causes, so far.

A gradually increasing number of viruses are being implicated in adrenaline system diseases of all sorts.  The virus attacks the adrenal gland. 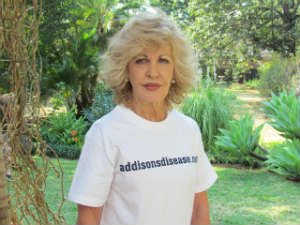 Previous studies have suggested that there may be an association between some immune-mediated diseases and risk of tuberculosis (TB).  …We analyzed a database of linked statistical records of hospital admissions and death certificates for the whole of England (1999 to 2011), and a similar database (the Oxford Record Linkage Study (ORLS)) for a region of southern England in an earlier period. Rate ratios for TB were determined, comparing immune-mediated disease cohorts with comparison cohorts.   Particularly high levels of risk were found for Addison's disease …PMID:  23557090 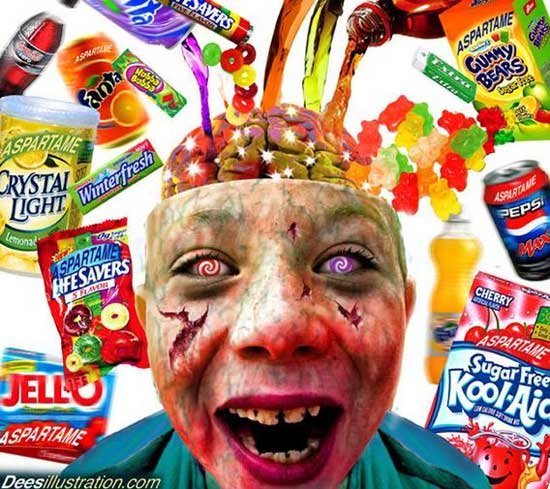 There are far fewer papers on the link here, but as the research is very new here I expect there will be more in due course

Again there are fewer papers, but one rather interesting line of research is that both toxin and heavy metal poisoning may manifest as odd pigmentation and this might be the clue that toxins of one sort or another are the cause.  Do not forget the role dental amalgam fillings can play as a toxin producing heavy metals - mercury.

The links here are very clear and there are numerous instances of the problems caused by parasites.  Here is one very interesting example

Paracoccidioidomycosis is regularly associated with adrenal insufficiency in 10-15% of symptomatic cases, and in some instances, diagnosis of the mycosis precedes the adrenal manifestation. To establish the frequency of this association, records were reviewed of 207 cases diagnosed with mycosis at the Mycology Service of the Corporación para Investigaciones Biológicas. Six cases (2.9%) were found to have adrenal insufficiency. Patients were all males with a mean age of 67.2 years (range 48-75) and most worked in agriculture. The duration of the symptoms of adrenal damage was 4.1 months (range 2-6). All patients experienced weight loss and malaise; all had abnormal lung X-rays. Major clinical improvement was recorded after initiation of the specific treatments consisting of itraconazole, prednisolone and fluorcortisone. Diminished antibody titers against Paracoccidioides brasiliensis were also recorded after treatment. Prompt treatment re-established adrenal function and effected recovery of normal gland morphology. Consequently, early detection of hypoadrenalism in patients living in the endemic areas is necessary to avoid further adrenal damage and permits a shorter hormonal treatment period in patients afflicted by the mycosis.  PMID:  12404928

The eHealthme site collects the Adverse Drug reports submitted by doctors to the FDA and SEDA in the USA.  It then summarises them for ease of use.  We originally provided a direct link to a number of different types of Adrenal system disease listed on this site:

and the pharmaceuticals that can cause it, but the eHealthme website frequently reorganise the site and thus break the links.  Thus in order to find out which pharmaceuticals are implicated in the various types of Adrenal system disease

The list shows you all the drugs implicated in CAUSING the various types of Adrenal system disease as well as the number of people who have made a complaint to their doctor and had their case reported by him.  Note that it is up to the doctor whether he reports or not.

As of October 2016, about 300 pharmaceuticals were in the list for just Addison's disease alone.

There are some interesting classes of drugs in these lists.  One class is Hydrocortisone the  name for cortisol when used as a medication. It is used to treat people who "lack adequate stores of naturally generated cortisol in their bodies".   There are also drugs used to treat osteoporosis, chemotherapy drugs, anti-coagulants and blood thinners, immunosuppressants, a number of opioid analgesics, antidepressants, breast cancer treatments, asthma and allergy drugs, diuretics, statins, ACE inhibitors, benzodiazepines, diabetic treatments, morphine, NSAIDs and pain killers, epilepsy drugs, plus many, many more types.

It may speculatively also be caused by mineral imbalance and other forms of nutritional deprivation. 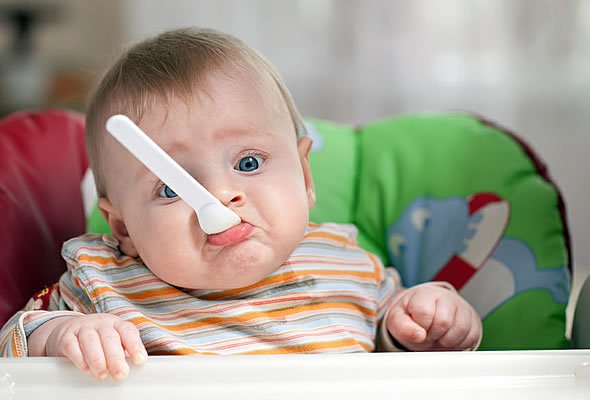 Any trauma to the body which damage the adrenal glands, for example

This case report describes interaction of trauma, endocrine disorder and infection resulting in a complex psychopathology in an 82-year-old, previously healthy lady. One month after a hip replacement, she developed fluctuating cognitive impairment and delusions, associated with hyponatraemia. Shortly afterwards, development of severe depression resulted in a prolonged psychiatric admission. During this time, she suffered recurring urinary tract infections (UTIs). Delusions and fluctuating cognition persisted. Persistent hyponatraemia prompted regular cortisol monitoring. Gradual decline was detected and primary adrenal insufficiency was confirmed with Synachten test. Starting life-long substitution treatment resulted in a normalisation of serum sodium levels, mood and cognition and disappearance of psychotic features. According to our hypothesis, psychopathology was induced by hypoadrenalism triggered by the hip replacement and perpetuated by recurrent UTIs.  PMID:  22707626 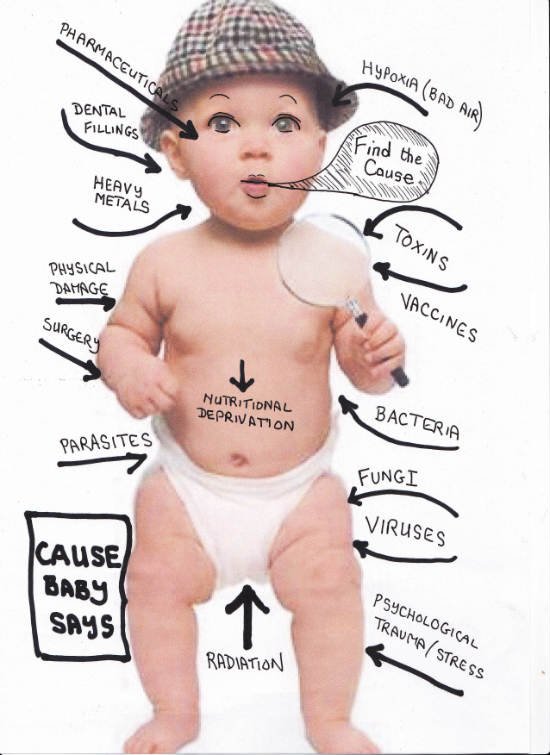 Cause baby shows all the causes of illnesses, in the lists above I have placed only those for which there are currently PubMed papers, in time we may find all the causes in the cause baby picture apply to this disease too.

First find the cause.  See Healing yourself

All the non healing spiritual experiences were caused by Encephalitis, in effect Brain damage 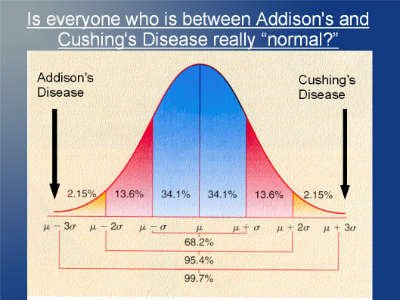