Viscount Adare - Experiences in Spiritualism with Mr D D Home – 43 On two occasions during the séance, the table was raised about a foot in the air and remained there poised for some time, oscillating gently from side to side

While walking about Home suddenly stopped in the middle of a sentence with a violent gasp, and sinking on his knees went into a trance. He got up, walked about,-apparently conversing with someone, and then, taking each of us in turn by the hand, led us to the other table, placed chairs for us, and signed to us to sit down.

My father requested me to bring paper and a pencil; but Home shook his head, and afterwards brought them himself. He then commenced arranging the furniture in the most minute detail, consulting apparently all the time with someone. He placed the small round table near us and behind my father, and moved a, chair up to it; he altered the position of several of the chairs in different parts of the room, placed the miniature portrait of his wife on the small round table, and the case containing little Dannie Cox's photograph on the large table behind me, then going to the bookcase he took out several books, looked into them and replaced them; at length he appeared to find what he wanted, for he took out a volume, folded his hands across it on his breast, and. after standing for a few seconds in a most reverential attitude, sunk down upon his knees and appeared to pray earnestly ; then rising to his full height, he held the book as high as he could above his head and placed it upon our table.

On looking at the volume afterwards we found it to be, “Jesus Christ; His Times, Life, and Work," by E. de Pressense.

He again commenced making mesmeric passes about the room, Coming to me he passed his hand sharply across my shoulders from left to right, did the same to Major Blackburn, then to my father, and finally to himself; then reversing the action, he commenced with himself making the pass from right to left, and. went over us all in the same way; this curious movement he repeated three times.

He now put out the candle leaving us with no other light but that of the fire, rubbed his hands, smiled, and nodded when I remarked, that I thought we should have some manifestations as he seemed to be contented.

Having taken his seat he altered the position of two vases of flowers on the table in such a way, as to make with the book, which he placed back upwards transversely between them, the form of a cross. The accompanying diagram shews the arrangement of the various articles. They are marked by capital letters in their original positions, while the altered places of those that were moved, are indicated by small letters. 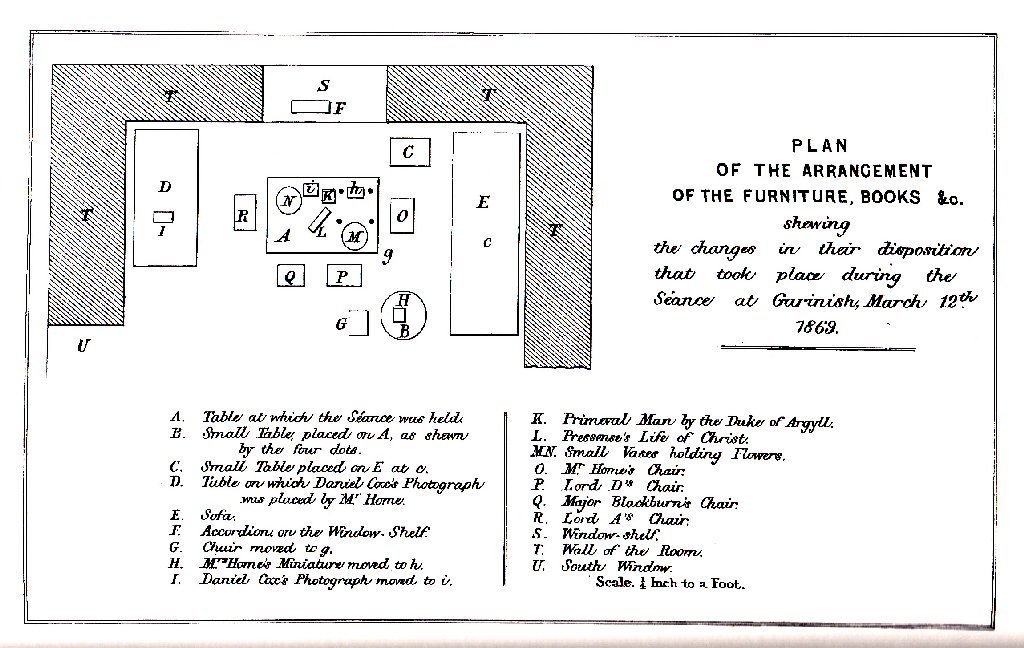 Home awoke, and we had all the usual physical phenomenal very strong currents of cold air, vibrations of the table, &c., &c. On two occasions during the séance, the table was raised about a foot in the air and. remained there poised for some time, oscillating gently from side to side.

We now all heard a movement about vase N, and Home and I, both saw a hand upon it; I said that the vase was moving ; Home insisted that it was not, and requested me to place my hand upon it: I did so, and. found that it was moving slowly round, but the sound we heard was caused by the hand rubbing against the side of the vase; I saw the hand all the time. We now heard a rustling among the flowers, and Home said,

“The fingers have closed over a flower and taken it away."

I did not see the flower taken, but the hand at that moment disappeared. Home and I both observed a hand rise above the edge of the table near the window, and place a flower upon it; I then lost sight of the hand, but Home said he saw it carry the flower across the table, and place it near my father: my father saw the flower all the time moving as it were of itself, for he could not distinguish the hand that conveyed it.

He took the flower, and asked if it was for him.  The following was spelled out:

“Yes and, we will give you another soon”

My father remarking that he was very anxious to see a hand, the following messages were given :

“Place your hand over the flowers."

He did so over vase N, and we all heard-and my father, Home, and I, saw, a hand moving among the flowers.

He did so, and the hand became much more distinctly visible to him. I said to my father, ”I suppose you were told to place your hand there in order that they might draw some power from you to enable them to make the hand sufficiently material for you to see it distinctly

Sacha's (Home's wife's) miniature was now carried from table B, and placed upon our table; none of us saw anything supporting it, but we observed it placed quietly upon Home's hands, and then gliding off them it moved across the table until it remained stationary on the corner near the window................................

The second flower that was promised to my father was now placed on the table near his hand; none of us saw anything supporting it, but Home perceived the flower moving in the air.   A flower came from-the direction of where Home was sitting towards me; it dropped on the edge of the table close to me, and fell on the floor: I saw it in the air. Home and I perceived a hand place something on the shelf under the window, and we saw a hand with a flower raised above the side of the table next the window; Home stretched out his hand towards it, and the flower dropped on the floor.

Both my father and Home were repeatedly touched; I also, on four occasions, was most palpably touched by a hand patting my knee;  someone remarked that Major Blackburn had not been touched, soon after he declared that he felt a hand touch his knee ; he asked who it was, and the name “John" was spelled.

He replied, ”My father's name was John, but I do not know whether it was he that touched me."

The words, “Yes, your father," were spelled; and then, a “We wish John also to see the hand; place your hand, above, and then on, the flowers”.

Major Blackburn did so; we all heard the flowers rustling, and Home and I saw the hand doing it. The Major saw nothing while his hand was over the flowers; but when he touched them, he also saw the hand, though indistinctly.

We now heard loud raps upon the small table C, and looking round, found that it had been lifted up and placed upon the sofa E at c; so quietly was it done that we should not have noticed it, had the spirits not called our attention by rapping upon it. My father asked if they had moved it in the same way last night ;the answer was, “Yes”

The chair G was moved up to g, and the table B was moved close to it. The table B was then raised in the air (no one touching it), and placed gently, but without hesitation, upon our table A. The table B has four legs, like a camp stool ; they rested where the four dots are marked, close to the vases, books and portraits, without touching any of them.

We now felt very strong vibrations in our table ; it was tilted from side to side, and so strongly towards my father's side, that he put out his hand expecting the small table B to fall over upon him; but nothing moved.  About this time we heard, curious sounds in the air; Home said,

“Do you hear their voices ? I will talk, never mind what I say the more I talk the plainer you will hear them."

He went on speaking for two or three minutes, during which time we heard strange noises like high-pitched voices at a little distance, the louder he spoke the louder the sounds became, they were most peculiar ; we could not hear any articulate words. Mrs. Blackburn, who had retired to bed in the room under that in which we were sitting, told us next day that she had heard strange sounds; and she imitated them so well, that we at once recognised that she really had heard the voices.

Home then went into a trance, and said, “We are so very glad to have been able to effect what has been done for you; but the state of the external atmosphere, and the fact of Dan being ill, are very much against us; we have not been able to do  by any means all that we intended.