The last remaining Dorset Ooser mask, taken in the late 19th century. Shortly after this photograph was taken the mask disappeared. 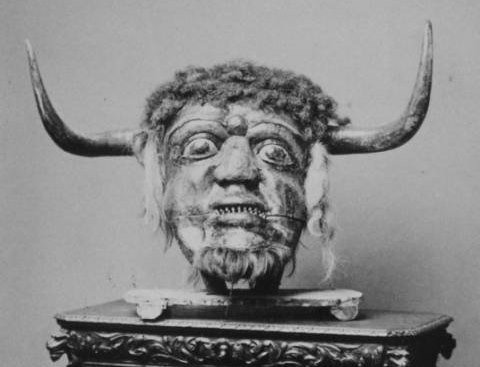 The Dorset Ooser mask is regarded as a remnant of long lost folklore from well over a thousand years ago.  It is connected to ‘Paganism’ [that is not Christianity].   And indeed it is a most fascinating artefact.  It is thought that at one time nearly every Dorset town and village would have had their own Ooser, but by the beginning of the 20th century only one was left, at Melbury Osmond. Unfortunately this last Ooser mask disappeared in 1897, with rumours suggesting that it had been stolen and sold to a wealthy American, or perhaps to a Dorset witch coven. There is, however, a replica of the Melbury Osmond mask in the Dorset County Museum, and every year it is used by Morris dancers as part of the May Day celebrations at the Cerne Abbas Giant.

Perhaps of most interest is that within the villages at least, the meaning was preserved, although actual meaning was hidden in some rather obscure play acting to divert attention away from its symbolism.  We know this because when it was used the Ooser mask was often worn by one of the more senior members of the village – a village elder.

By the 17th century, the Dorset Ooser mask was being used for a custom known as the 'Skimmington Riding'. This rather peculiar custom was essentially a rowdy parade of locals, riding through the streets of their local towns demonstrating against ‘immoral acts’ such as ‘adultery, witchcraft’ and even for a man's 'weakness in his relationship with his wife'. In these cases the perpetrators would be forced to participate in the parade.  Show themselves.

In all the ancient religions sex was a key mechanism of obtaining spiritual experience, as such this was probably more of an advertisement  by those in the know, than the supposed ‘parade of shame’ the writer of the above appeared to believe.

The mask preserves the Bull and Cow symbolism of some very ancient religions and in some Dorset towns such as Shillingstone, the Ooser mask became the 'Christmas Bull'.  In all the ancient religions, the sacrifice was initiated as a means of feeding the priests, who had of course to eat and thus asked for animals to be sacrificed to the gods in order to get a square meal.  And this truly ancient sacrificial offering custom was preserved in the Christmas Bull as roamed through the streets of Dorset villages at the end of the year demanding food and drink from the local populace.

Bull and cow
Cyclops and the third eye
Twin horns