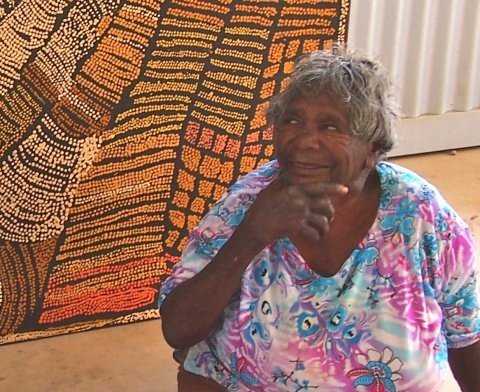 Spencer and Gillen – The Northern tribes of Central Australia

These atnongara stones are small crystalline structures which every medicine man is supposed to be able to produce at will from his body, through which it is believed that they are distributed.  In fact it is the possession of these stones which gives his virtue to the medicine man

When he was made into a medicine man, a very old doctor came one day and threw some of his atnongara stones at him with a spear thrower.  Some hit him on the chest, others went right through his head, from ear to ear killing him.

The old man then cut out all of his insides, intestines, liver, heart, lungs – everything in fact, and left him lying all night long on the ground.  In the morning the old man came and looked at him and placed some more atnongara stones inside his body and in his arms and legs and covered his face with leaves.

Then he sang over him until his body was all swollen up.  When this was so he provided him with a complete set of new inside parts, placed a lot more atnongara stones in him and patted him on the head, which caused him to jump up alive.

The old medicine man then made him drink water and eat meat containing atnongara stones.  When he awoke he had no idea as to where he was and said ‘Tju, tju, tju’ – ‘I think I am lost’.  But when he looked round he saw the old medicine man standing beside him and the old man said, ‘No, you are not lost; I killed you a long time ago’.

Ilpailurkna had completely forgotten who he was and all about his past life.  After a time the old man led him back to his camp and showed it to him and told him that the woman there was his lubra, for he had forgotten all about her.  His coming back this way and his strange behaviour at once showed the other natives that he had been made into a medicine man.