Tlatzolteotl – according to Wikipedia, in Aztec mythology, Tlazolteotl was a ‘goddess of steam bath, midwives, and a patroness of adulterers’! However, she was a purification goddess as well, who forgave sins and cured disease.  And she could fly  - on what appears to be a reversed broomstick [though this is a guess] and a symbolic snake 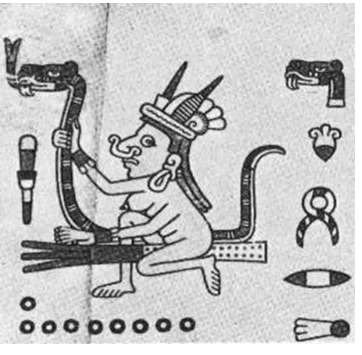 The Daily Life of the Aztecs – Jacques Soustelle

the typically Mexican steam-bath was called the temazcalli. This very characteristic practice, which still goes on in the Nahuatl villages, was so general in the days before the Spaniards that the greater part of the houses had close by them a little hemispherical building made of stones and cement which was used for having a steam-bath.

The fireplace was built outside the temazcalli itself, and it had a common wall with it, made of porous stone: this wall was brought to a glowing heat by a fire of wood. When it was ready the Indian who intended to bathe crept into the temazcalli by a little low door and threw water on the red-hot wall. He was then enveloped in steam, and he switched himself violently with grasses. Often there would be another person there, particularly if the bather were an invalid, to massage him; and after the massage the bather would lie upon a mat to let the bath have its effect.

Clearly, the bath was expected to have two effects; on the one hand it was thought of as an act of cleanliness and as a form of medical treatment, and on the other as an act of purification.

Women who had had babies went to the temazcalli before taking up ordinary life again - a practice that still prevails.  The Codex of 1576 records that in the year ce acatl, or 1363, 'the wives of the Mexicans had their children at Zoquipan and bathed themselves at Temazcaltitlan (the place of the steam baths).