Seiganto-ji  is a Tendai Buddhist temple in Wakayama Prefecture, Japan. In 2004, it was listed as a UNESCO World Heritage Site along with other locations, under the name "Sacred Sites and Pilgrimage Routes in the Kii Mountain Range". According to a legend, it was founded by the priest Ragyō Shōnin, a monk from India. The temple was purposely built near Nachi Falls and the explanation given by any guide books says that it was built for ‘nature worship’.

Tendai doctrine allowed Japanese Buddhists to reconcile Buddhist teachings with the native religion of Japan, Shinto, as such it seemed sensible to group this observation with that for Shinto, particularly as it concerns ‘the myriad spirits associated with places, shrines or objects’.  The Tendai sect argued that Kami are simply spirits – functions and should be recognised as such. 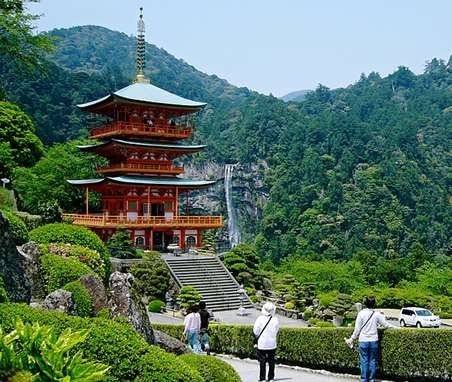