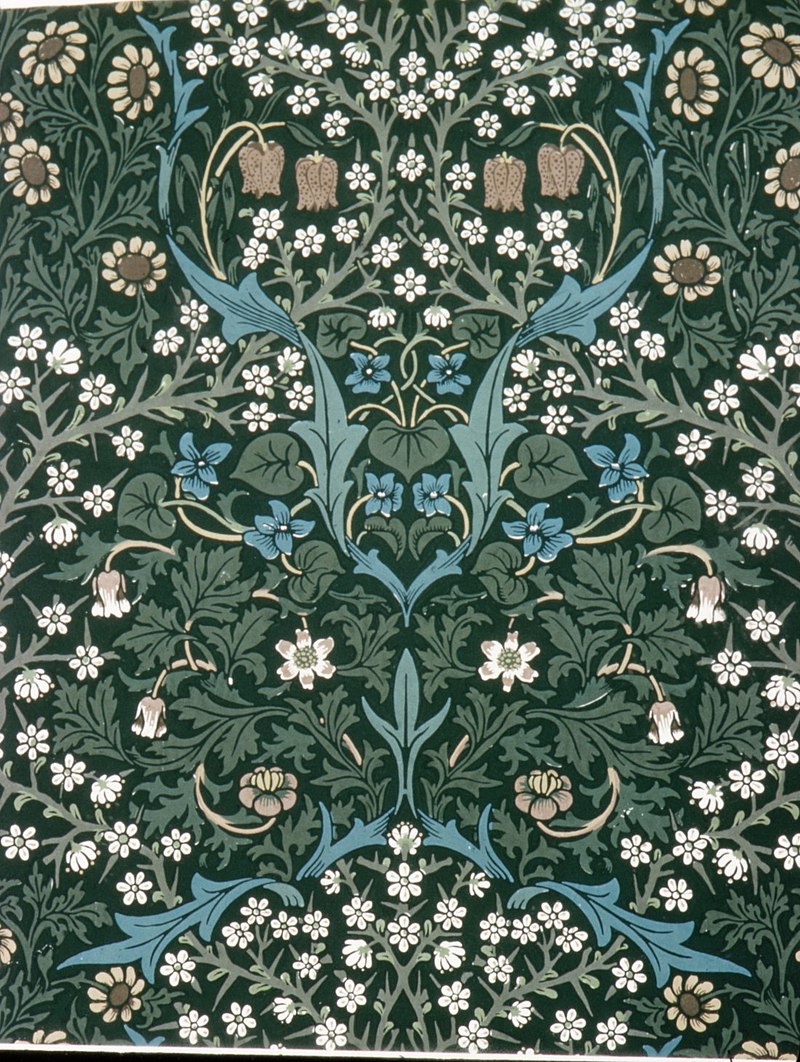 VIII. Sigurd slayeth Regin the Master of Masters on the Glittering Heath

There standeth Sigurd the Volsung, and leaneth on his sword,

3530
And beside him now is Greyfell and looks on his golden lord,
And the world is awake and living; and whither now shall they wend,
Who have come to the Glittering Heath, and wrought that deed to its end?
For hither comes Regin the Master from the skirts of the field of death.
And he shadeth his eyes from the sunlight afoot he goeth and saith :

3535
"Ah, let me live for a while! for a while and all shall be well,
When passed is the house of murder and I creep from the prison of hell."

Afoot he went o'er the desert, and he came unto Sigurd and stared
At the golden gear of the man, and the Wrath yet bloody and bared,
And the light locks raised by the wind, and the eyes beginning to smile,

3540
And the lovely lips of the Volsung, and the brow that knew no guile;
And he murmured under his breath while his eyes grew white with wrath:

"O who art thou, and wherefore, and why art thou in the path?"

Then he turned to the ash-grey Serpent, and grovelled low on the ground,
And he drank of that pool of the blood where the stones of the wild were drowned,

3545
And long he lapped as a dog; but when he arose again,
Lo, a flock of the mountain-eagles that drew to the feastful plain;
And he turned and looked on Sigurd, as bright in the sun he stood,
A stripling fair and slender, and wiped the Wrath of the blood.

3550
O shapes of might and wonder, am I too freed from the yoke
That binds my soul to my body a withered thing forlorn,
While the short-lived fools of man-folk so fair and oft are born?
Now swift in the air shall I be, and young in the concourse of kings,
If my heart shall come to desire the gain of earthly things."

3555
And he looked and saw how Sigurd was sheathing the Flame of War,
And the eagles screamed in the wind, but their voice came faint from afar :
Then he scowled and crouched and darkened, and came to Sigurd and spake:
"O child, thou hast slain my brother, and the Wrath is alive and awake."

3560
"Thou sayest sooth," said Sigurd, "thy deed and mine is done:
But now our ways shall sunder, for here, meseemeth, the sun
Hath but little of deeds to do, and no love to win aback."

Then Regin crouched before him, and he spake: "Fare on to the wrack !
Fare on to the murder of men, and the deeds of thy kindred of old !

3565
And surely of thee as of them shall the tale be speedily told.
Thou hast slain thy Master's brother, and what wouldst thou say thereto,
Were the judges met for the judging and the doom-ring hallowed due?"

Then Sigurd spake as aforetime: "Thy deed and mine it was,
And now our ways shall sunder, and into the world will I pass."

3570
But Regin darkened before him, and exceeding grim was he grown,
And he spake: "Thou hast slain my brother, and wherewith wilt thou atone?"

"Stand up, O Master," said Sigurd, "O Singer of ancient days,
And take the wealth I have won thee, ere we wend on the sundering ways.
I have toiled and thou hast desired, and the Treasure is surely anear,

But Regin crouched and darkened: "Thou hast slain my brother," he said.

"Take thou the Gold," quoth Sigurd, "for the ransom of my head!"

Then Regin crouched and darkened, and over the earth he hung;
And he said: "Thou hast slain my brother, and the Gods are yet but young."

3580
Bright Sigurd towered above him, and the Wrath cried out in the sheath,
And Regin writhed against it as the adder turns on death;
And he spake: "Thou hast slain my brother, and today shall thou be my thrall:
Yea, a King shall be my cook-boy and this heath my cooking-hall."

Then he crept to the ash-grey coils where the life of his brother had lain,

3585
And he drew a glaive from his side and smote the smitten and slain,
And tore the heart from Fafnir, while the eagles cried o'erhead,
And sharp and shrill was their voice o'er the entrails of the dead.

Then Regin spake to Sigurd: "Of this slaying wilt thou be free?
Then gather thou fire together and roast the heart for me,

3590
That I may eat it and live, and be thy master and more;
For therein was might and wisdom, and the grudged and hoarded lore:—
—Or else, depart on thy ways afraid from the Glittering Heath."

Then he fell abackward and slept, nor set his sword in the sheath.
But his hand was red on the hilts and blue were the edges bared,

3595
Ash-grey was his visage waxen, and with open eyes he stared
On the height of heaven above him, and a fearful thing he seemed,
As his soul went wide in the world, and of rule and kingship he dreamed.

But Sigurd took the Heart, and wood on the waste he found,
The wood that grew and died, as it crept on the niggard ground,

3600
And grew and died again, and lay like whitened bones;
And the ernes cried over his head, as he builded his hearth of stones,
And kindled the fire for cooking, and sat and sang o'er the roast
The song of his fathers of old, and the Wolflings' gathering host:
So there on the Glittering Heath rose up the little flame,

3605
And the dry sticks crackled amidst it, and alow the eagles came,
And seven they were by tale, and they pitched all round about
The cooking-fire of Sigurd, and sent their song-speech out:
But nought he knoweth its wisdom, or the word that they would speak:
And hot grew the Heart of Fafnir and sang amid the reek.

3610
Then Sigurd looketh on Regin, and he deemeth it overlong
That he dighteth the dear-bought morsel, and the might for the Master of wrong,
So he reacheth his hand to the roast to see if the cooking be o'er;
But the blood and the fat seethed from it and scalded his finger sore,
And he set his hand to his mouth to quench the fleshly smart,

3615
And he tasted the flesh of the Serpent and the blood of Fafnir's Heart:
Then there came a change upon him, for the speech of fowl he knew,
And wise in the ways of the beast-kind as the Dwarfs of old he grew;
And he knitted his brows and hearkened, and wrath in his heart arose
For he felt beset of evil in a world of many foes.

3620
But the hilts of the Wrath he handled, and Regin's heart he saw,
And how that the Foe of the Gods the net of death would draw;
And his bright eyes flashed and sparkled, and his mouth grew set and stern
As he hearkened the voice of the eagles, and their song began to learn.

For the first cried out in the desert: "O mighty Sigmund's son,

3625
How long wilt thou sit and tarry now the dear-bought roast is done?"

And the second: "Volsung, arise! for the horns blow up to the hall,
And dight are the purple hangings, and the King to the feasting should fall."

And the third: "How great is the feast if the eater eat aright
The Heart of the wisdom of old and the after-world's delight !"

3630
And the fourth: "Yea what of Regin? shall he scatter wrack o'er the world?
Shall the father be slain by the son, and the brother 'gainst brother be hurled?

And the fifth: "He hath taught a stripling the gifts of a God to give:
He hath reared up a King for the slaying, that he alone might live."

And the sixth: "He shall waken mighty as a God that scorneth at truth;

3635
He hath drunk of the blood of the Serpent, and drowned all hope and truth."

And the seventh: "Arise, O Sigurd, lest the hour be overlate!
For the sun in the mid-noon shineth, and swift is the hand of Fate:
Arise! lest the world run backward and the blind heart have its will,
And once again be tangled the sundered good and ill;

3640
Lest love and hatred perish, lest the world forget its tale,
And the Gods sit deedless, dreaming, in the high-walled heavenly vale."

Then swift ariseth Sigurd, and the Wrath in his hand is bare,
And he looketh, and Regin sleepeth, and his eyes wide-open glare;
But his lips smile false in his dreaming, and his hand is on the sword;

3645
For he dreams himself the Master and the new world's fashioning-lord,
And his dream hath forgotten Sigurd, and the King's life lies in the pit;
He is nought; Death gnaweth upon him, while the Dwarfs in mastery sit.

But lo, how the eyes of Sigurd the heart of the guileful behold,
And great is Allfather Odin, and upriseth the Curse of the Gold,

3650
And the Branstock bloometh to heaven from the ancient wondrous root;
The summer hath shone on its blossoms, and Sigurd's Wrath is the fruit.
Dread then he cried in the desert: "Guile-master, lo thy deed!
Hast thou nurst my life for destruction, and my death to serve thy need?
Hast thou kept me here for the net and the death that tame things die?

3655
Hast thou feared me overmuch, thou Foe of the Gods on high?
Lest the sword thine hand was wielding should turn about and cleave
The tangled web of nothing thou hadst wearied thyself to weave.
Lo here the sword and the stroke! judge the Norns betwixt us twain !
But for me, I will live and die not, nor shall all my hope be vain."

3660
Then his second stroke struck Sigurd, for the Wrath flashed thin and white,
And 'twixt head and trunk of Regin fierce ran the fateful light;
And there lay brother by brother a faded thing and wan.
But Sigurd cried in the desert: "So far have I wended on!
Dead are the foes of God-home that would blend the good and the ill;

3665
And the World shall yet be famous, and the Gods shall have their will.
Nor shall I be dead and forgotten, while the earth grows worse and worse,
With the blind heart king o'er the people, and binding curse with curse."