This observation is important as it shows how the sap of the Dragon tree was used as a substitite for blood in rituals. 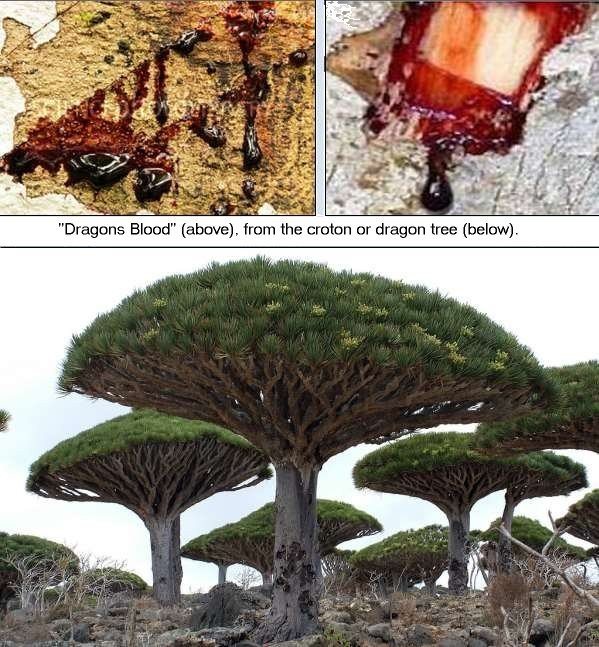 After that, he questioned his daughter:

"Who is responsible for the child in your belly, my daughter?" he said.

"There is no child, my father, sir; there is no man whose face I've known," she replied.

"Very well. It really is a bastard you carry! Take her away for sacrifice, you Military Keepers of the Mat. Bring back her heart in a bowl, so the lords can take it in their hands this very day," the owls were told, the four of them.

Then they left, carrying the bowl. When they left they took the maiden by the hand, bringing along the White Dagger, the instrument of sacrifice.

"It would not turn out well if you sacrificed me, messengers, because it is not a bastard that's in my belly. What's in my belly generated all by itself when I went to marvel at the head of One Hunahpu, which is there at the Place of Ball Game Sacrifice. So please stop: don't do your sacrifice, messengers," said the maiden. Then they talked:

"What are we going to use in place of her heart? we were told by her father:

'Bring back her heart. The lords will take it in their hands, they will satisfy themselves, they will make themselves familiar with its composition. Hurry, bring it back in a bowl, put her heart in the bowl. Isn't that what we've been told? What shall we deliver in the bowl? What we want above all is that you should not die," said the messengers.

"Very well. My heart must not be theirs, nor will your homes be here. Nor will you simply force people to die, but hereafter, what will be truly yours will be the true bearers of bastards. And hereafter, as for One and Seven Death, only blood, only nodules of sap, will be theirs. So be it that these things are presented before them, and not that hearts are burned before them. So be it: use the fruit of a tree," said the maiden. And it was red tree sap she went out to gather in the bowl.

After it congealed, the substitute for her heart became round. When the sap of the croton tree was tapped, tree sap like blood, it became the substitute for her blood. When she rolled the blood around inside there, the sap of the croton tree, it formed a surface like blood, glistening red now, round inside the bowl. When the tree was cut open by the maiden, the so-called cochineal croton, the sap is what she called blood, and so there is talk of "nodules of blood."

"So you have been blessed with the face of the earth. It shall be yours," she told the owls.

"Very well, maiden. We'll show you the way up there. You just walk on ahead; we have yet to deliver this apparent duplicate of your heart before the lords," said the messengers.

And when they came before the lords, they were all watching closely:

"Hasn't it turned out well?" said One Death.

"It has turned out well, your lordships, and this is her heart. It's in the bowl."

"Very well. So I'll look," said One Death, and when he lifted it up with his fingers, its surface was soaked with gore, its surface glistened red with blood.

"Good. Stir up the fire, put it over the fire," said One Death.

After that they dried it over the fire, and the Xibalbans savored the aroma. They all ended up standing here, they leaned over it intently.

They found the smoke of the blood to be truly sweet!

And while they stayed at their cooking, the owls went to show the maiden the way out. They sent her up through a hole onto the Earth, and then the guides returned below.
In this way the lords of Xibalba were defeated by a maiden; all of them were blinded.