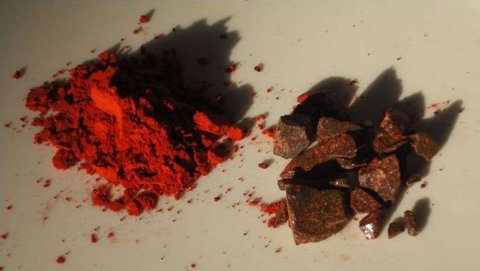 Dragon's blood is a bright red resin that is obtained from different species of a number of distinct plant genera: Croton, Dracaena, Daemonorops, Calamus rotang and Pterocarpus. The red resin was used in ancient times as varnish, medicine, incense, and dye. Its use as a medicine is through ignorance – it is the result of the literalisation of a symbolic association.  But its use as a dye or paint does make sense.

Blood has a symbolic meaning – it means spirit, the water of life, spirit input, thus by dyeing anything red or smearing them with this dye one had effectively made the buildings or person ‘holy’.  In effect Dragon’s blood is symbolically the same as blood, and a means of obtaining the blood like colour without needing actual blood.

Despite western misconceptions, the majority of older cultures that used blood symbolically had little wish to kill anything, as such the existence of a symbolic substitute was very welcome.

It was extensively used in Central America, for example, as a substitute for blood.  Many a conquistador seeing the Mayan, Aztec and Inca temples all painted red and smelling of the intense scent this resin gives off was deluded into thinking that the cultures in this area practised literal sacrifice on an appalling scale.  But they didn’t.  This is not to say that there was no ‘sacrifice’, the Inca frequently ‘sacrificed’ sheep and llamas – and then ate them at a festive gathering.

One of the problems with Dragon’s blood in the days when it was used extensively, was that the purchasers never knew whether they were being sold the genuine article.  The resin of Dracaena species, "true" dragon's blood, for example, and the very poisonous mineral cinnabar (mercury sulfide)were often confused by the ancient Romans, and there appears to have been a tendency to call anything that was bright red "dragon's blood".

The Romans were poisoned by their lead pipes and the lead salts they put in wine to sweeten it, but it appears they also suffered from mercury poisoning.  As aggression and cruelty appear to be a by-product of heavy metal poisoning, we can assume that the practises of the Romans and their general attitude later in the empire was probably due to this mixed poisoning  - lead and false dragon’s blood.

Voyagers to the Canary Islands in the 15th century obtained dragon's blood as dried garnet-red drops from Dracaena draco, a tree native to the Canary Islands and Morocco. The resin is exuded from its wounded trunk or branches. Dragon's blood is also obtained by the same method from D. cinnabari, which is endemic to the island of Socotra. This resin was traded to ancient Europe via the Incense Road.

Dragon's blood resin is also produced from the rattan palms of the genus Daemonorops of the Indonesian islands and known there as jerang or djerang. It is gathered by breaking off the layer of red resin encasing the unripe fruit of the rattan. The collected resin is then rolled into solid balls before being sold.

In all the older mystic and spiritually ‘pure’ cultures, dragon’s blood was only ever used as a colour.  Dragon's blood from both Daemonorops were used for ceremonies in India, for example, but as a colour not as an incense.

But ignorance being what it is, numerous cults started to believe that because the mystic cultures used it, then it had to have magic properties.  It doesn’t of course, it is just a symbol, but that is ignorance for you.

It was used in medieval ritual magic.  In American Hoodoo, African-American folk magic, and New Orleans voodoo, "it is used in mojo hands for money-drawing or love-drawing".  In the rather typical way that the products of the East are used mindlessly and without understanding by the west, it is also used “as incense to cleanse a space of negative entities or influences”.  In neopagan Witchcraft it is used “to increase the potency of spells for protection, love, banishing and sexuality. In New Age shamanism it is used in ceremonies in a similar way as the neopagans use it”.  Hmmmm.

It actually contains no opiates.

I have no idea how toxic this stuff is when burnt.  As it was never intended that it should be burnt, or - God help us – smoked, we have no records as to what the effects would be.  From the following I can only assume it causes hypoxia and brain damage.  I have not changed the spelling, though I have shortened it a bit as it rambled on a lot

Breathing Crimson - Red Rock - by Eribis  source EROWID
I'm sitting at home when I get a call from a good fellow asking me if I may be able to rid him of some redrock he has. This intrigeus me leading me to hasten over to a place of meeting.
I was skeptical at first of this substance being sold to me as redrock. I hear that redrock is dragons blood incense sold at an inflated price so I bring this up to the good fellow in possession of this beautiful substance, with a grin he replys with a: 'Well, yes my good friend, it IS dragons blood incense but with a hint of magic to it.' Now this leads me to a fit of confusion as I stand asking myself, 'why would he admit that to me? and why is he grinning?'
He places a good bit, I estimate a half gram or so onto a large peice of foil which has been folded as to have 3 layers. An indirect flame is applied under the substance which melts to a surprisingly blood-like color, texture, and consistancy. As the redrock boiled off the vapors were inhaled through a hollow glass tube. It tasted very sweet with a hint of cinnimon and spice in my opinion and gave off a very pleasant odor which soon overcame the room.
After a few large breaths of this substance a very interesting sence began surrounding me from my thorax and extending to my limbs. It was a very distinct feeling unlike the usual opioid buzz. Not at all like heroin, dissimiler to Vietnamese opium, vaguely similar to Demerols, but overall more reminiscent of Klonopins or a good pirate shot of rum more than anything else. After completing the remainder of the redrock I felt floaty, distant, drunk, and definately unable to drive. This ..came as a surprise to me. I was expecting a mild opioid buzz at the most. Instead though I find myself in a definate depressant nod. A feeling of nothingness surrounds me and a sence of vauge darkness is present in the back of my head. Similar to the monster in the closet feeling as a kid. Overall this was unnexpected.
The remainder of the night, I stayed at this good fellows house … conversing of meaningless things while watching various mind numbing shows on the television untill I was ready to progress back to my own home back to my own existance.

I wonder how much he had to pay for this non experience.