Dante - Paradiso - The Ladder of Paradise

The Ladder of Paradise 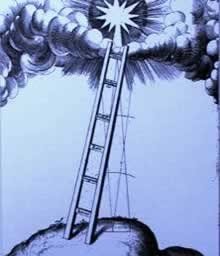 Within the crystal's ever circling sphere,
Named after its bright regent, him whose reign
Made wickedness to die and disappear,
Coloured like gold which flashes back again
The sun, I saw a ladder stand, that seemed
So high that the eye followed it in vain
Moreover on the rungs descending gleamed
So many splendours that each several star
From heaven methought, collected thither, streamed.

As rooks, after their natural habit, fare
Forth all together at beginning day
To warm their feathers chilled by the night air
Then some, without returning, wing away
Some to the boughs they have their nests among
Return, and others circling make a stay
Such a behaviour had that sparkling throng
It seemed to me, coming in bands abreast
Soon as they lighted on a certain rung
And that one which most near to us came to rest
Because so bright that I said in my thought
'I see the love to me thou signallest' .