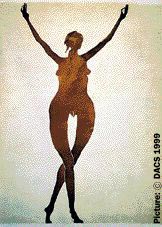 Beuys felt that an adequate artistic representation of Christ in the twentieth century could only be made through movement, referring to his own Actions.

Beuys's earliest crosses incorporated an element of movement, irregular organic shapes, and modernized versions of the traditional Celtic-Irish "resurrection, or sun cross," uniting the living sun disk with the symbol of death and thereby connecting Christ with the sun energies of nature. It was only a small step to progress to the queen bee as the female sign of the Christ energy and love within the natural world. Steiner associated Christ with the sun and in the seventh lecture portrayed bees as "creatures of the sun" with the queen bee having a special relationship to sun forces

This was a stage in Beuys's efforts to free himself from the traditional religious imagery of his Catholic upbringing so that he could develop more adventurous forms of artistic expression.