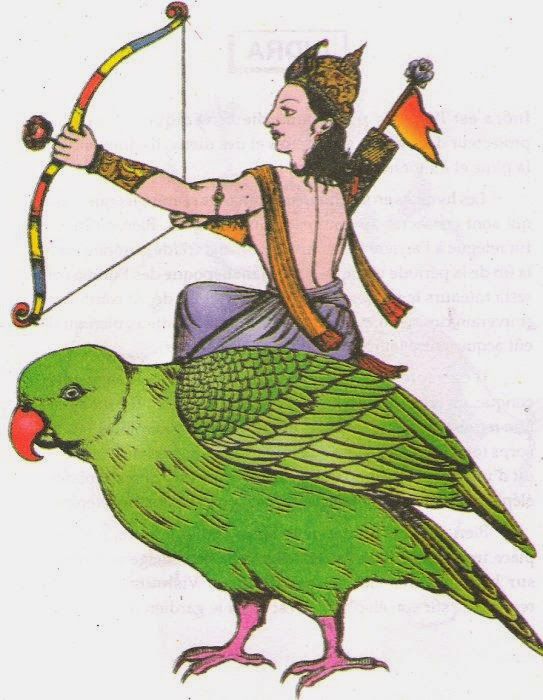 Kamadeva is the god of human love and passion in Hindu mythology – kama means sensual desire and a deva is a divine being.  He is regarded as the heavenly god of love, the arouser of passion among those struck by his cosmic arrow.  One can see here the close mythological association with cupid.

Needless to say he is popular and well-known as a Hindu deity and references to him can be found in numerous scriptures – the Rig Veda, Atharva veda and he figures prominently in the Puranas.

He is usually depicted as a handsome young winged man riding a parrot.  He carries a bow of sugar stringed with humming honeybees, his arrows are 5 scented flowers.  He is often accompanied by the god of Spring.  His consort of partner is usually Rati – the goddess of desire.

In legend, Lord Shiva had become too powerful and the world was not in balance, Shiva’s state threatened the very existence of the world.  In an attempt to save the earth, Kamadeva shot the arrow that united Lord Shiva and Parvati, thus bringing the world back into balance, but was killed [sacrificed] in the process – and thus love was sacrificed to save the earth.

The sun, the moon, the mystic planets seven,
Shone with a purer and serener flame.
And there was joy on Earth and joy in Heaven
When Kamadeva came. 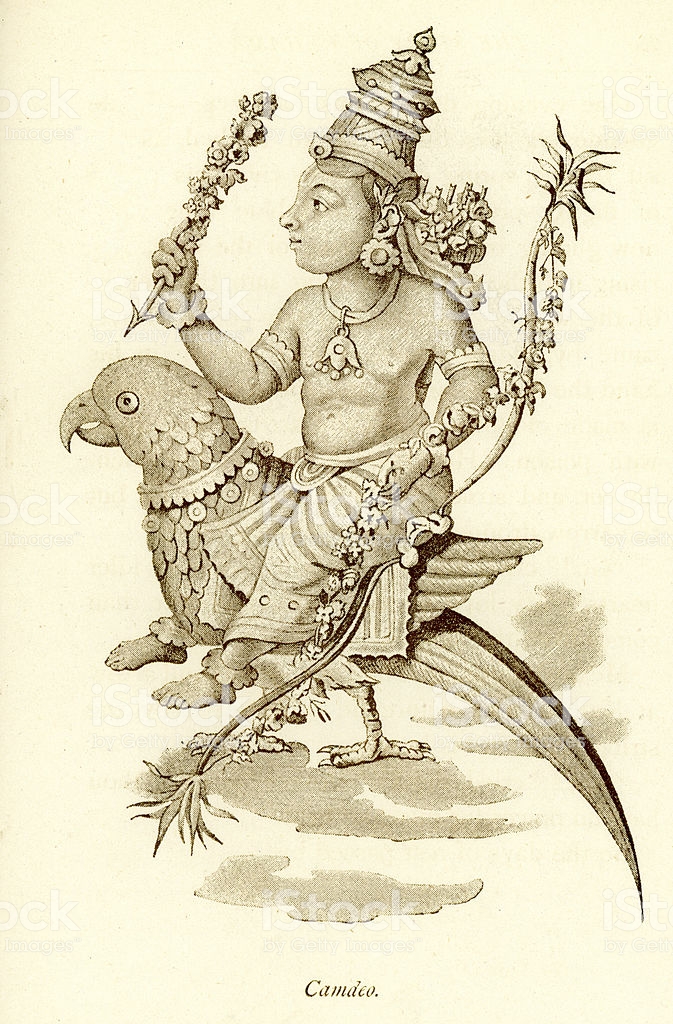 The blossoms burst, like jewels of the air,
Putting the colors of the mom to shame ;
Breathing their odorous secrets every where
When Kamadeva came.

The birds, upon the tufted tamarind spray.
Sat side by side and cooed in amorous blame :
The lion sheathed his claws and left his prey
When Kamadeva came.

The sea slept, pillowed on the happy shore ;
The mountain-peaks were bathed in rosy flame ;
The clouds went down the sky — to mount no more
When Kamadeva came.

The hearts of all men brightened like the morn ;
The poet's harp then first deserved its fame,
For rapture sweeter than he sang was born
When Kamadeva came.

All breathing life a newer spirit quaffed,
A second life, a bliss beyond a name.
And Death, half-conquered, dropped his idle shaft
When Kamadeva came.