This is not a joke, it is genuine.  The name for this in modern day sex circles is ball stretching.

The ball stretcher is fastened around a man in order to elongate the scrotum and provide a feeling of weight pulling the testicles away from the body.

The ball stretcher “can be home made by using rope or string and wrapping it around the scrotum until the desired length of stretch is obtained”.

I won’t describe the procedure because it has its dangers, not the least of which is that the circulation of blood can be easily cut off by tight stretchers.

If you want to use this technique a modern day equivalent which is safer is shown below.

While leather stretchers are most common, other models are made of steel rings that are fastened with screws, causing additional mildly uncomfortable weight to the wearer. The length of the stretcher may vary from 1-4 inches, and the steel models can weigh as much as five pounds. 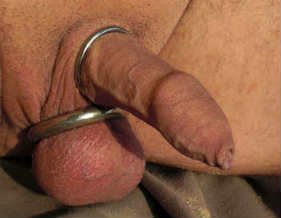