Like the sheaf or bunch, the yoke is a symbol of union and discipline; but by virtue of its association with the ox, it is also the symbol of sacrifice

All of which is true, but there is a little more that needs to be added here.

Within the context of all the activites which rely on sexual mechanisms, there is an element of sacrifice required in order that energy be conserved for the final 'push' which will open the crown chakra for good.  The yoke looks like a pelvis and there is thus the implied symbolism of union of a couple, via love and sex, and the need for sacrifices to make any experience of any real import become a reality. 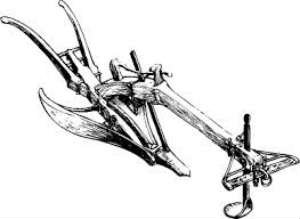 There are also obvious associations here with the plough. The picture of the plough here shows how symbolism was developed around old fashioned ploughs - we have the spine and the twin horns as well as the penis. Ploughing a furrow then has a whole new meaning in this spiritual context, as does scattering grain or seed.  Both grains and seeds are symbolic of souls, as such the sexual act as the creator of new little souls has considerable significance spiritually.  In olden days the sexual act was a sacred act and involved considerable love.

It is worth adding here the comment that Black Elk [a Native American] made to his biographer.  He told him that the Native Americans had no word equivalent to Fuck, and certainly never used the sexual act in the context of swearing.  To native Americans, as to Celts, Druids, Hindus, Inuits, Sufis, Mystics and Indigenous peoples worldwide, the creation of all life and the sexual act were sacred.  Via this method one came the closest to the divine that it is possible to go.  Divinity is only ever achieved via love and the expression of love.