There are two principal sets of systems in the spiritual world – the Great Work – the plan for how the universe is to evolve - and the Systems of the universe themselves.  Both are in essence systems – one is a system for evolving the universe, the other is the system thus evolved.  The one affects the other in that as the Great Work proceeds the systems themselves change, thus in reality we have here one integrated set of functions one which creates, changes and removes function and one which is the functions in operation.

If you put all these functions or transactions together what you find is that they together represent a truly truly vast system with inter dependent transactions both in the plan and the final system.    The overall effect is a network of pathways all connected up, looking like a cloth or a loosely woven net curtain.

Thus behind us we leave a trail of Perceptions – the thread or cord and that thread or cord can be linked in life to other threads and cords as we meet people, interact and work together creating a complex pattern of interconnecting threads.

And it is this analogy that gives us the symbolism of weaving.  Weaving is the process of both acting out our destiny, and using the systems of the universe. 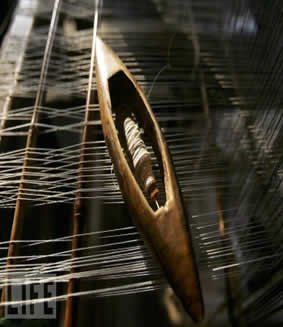 There is of course a connection with the Word, for if we use the analogy that it is the program language of the universe, the Word is the pattern - the instructions - we execute to produce our own part of this vast tapestry of function.

And the symbolism can be extended, as weaving involves patterns and patterns in life do tend to repeat themselves – not just because the system of the universe is itself a pattern, but because in life patterns of behaviour tend to get repeated generation after generation unless we break destructive patterns and introduce new more creative patterns.  Learnt function is part of this enormous system and it can improved, removed or endlessly repeated.

We are in this sense the bobbin as it weaves in and out of the cloth of life, bounded by what is possible functionally.

Henry Vaughan
Man is the shuttle, to whose winding quest
And passage through these looms
God ordered motion, but ordained no rest

Longfellow
Love is ever busy with his shuttle
Is ever weaving into life’s dull warp
Bright gorgeous flowers and scenes Arcadian
Hanging our gloomy prison-house about
With tapestries, that make its walls dilate
In never ending vistas of delight

From this symbolism we also get the symbolism of the Loom and the Net – all connected and consistent.

Gojusan [translated by Lucien Stryk]
Seamless -
Touched, it glitters
Why spread such nets
For sparrows?

There are any number of myths and legends in cultures worldwide that incorporate the idea of weaving – the loom of interconnected life, the loom on which the Creator created the systems of the universe, spinning of the thread of life and the loom that links the fates of things.  For example:-

Egypt - In pre-Dynastic Egypt, nt (Neith) was already the goddess of weaving (and a mighty aid in war as well). She protected the Red Crown of Lower Egypt before the two kingdoms were merged, and in Dynastic times she was known as the most ancient one, to whom the other gods went for wisdom. Nit is identifiable by her emblems and most often it is the loom's shuttle, with its two recognizable hooks at each end, upon her head. According to E. A. Wallis Budge (The Gods of the Egyptians) the root of the word for weaving and also for being are the same: nnt.

Greece - a number of goddeses were associated with weaving, and in Homer's legend of the Odyssey, Penelope the faithful wife of Odysseus was a weaver, weaving her design for a shroud by day, but unravelling it again at night, to keep her suitors from claiming her during the long years while Odysseus was away.

Norse - For the Norse peoples, Frigg was the goddess associated with weaving. The Scandinavian "Song of the Spear", quoted in "Njals Saga", also gives a detailed description of Valkyries as women weaving on a loom, with severed heads for weights [beheading], and arrows for shuttles, which are both symbolically important

England - A high-born woman sent as a hostage-wife to a foreign king was repeatedly given the epithet "weaver of peace", linking weaving and ‘the familiar role of a woman as a dynastic pawn’. A familiar occurrence of the phrase is in the early English poem Widsith,  who "had in the first instance gone with Ealhild, the beloved weaver of peace, from the east out of Anglen to the home of the king of the glorious Goths, Eormanric, the cruel troth-breaker..." 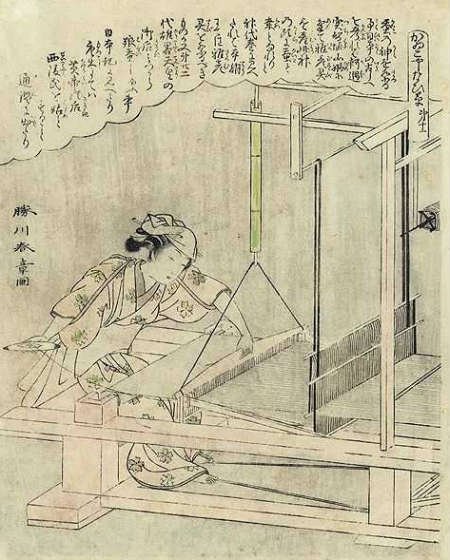 China - In Tang Dynasty China, the weaving goddess floated down on a shaft of moonlight with her two attendants, showed to the upright court official Guo Han in his garden that a goddess's robe is seamless for it is woven without the use of needle and thread, entirely on the loom. The phrase "a goddess's robe is seamless" passed into an idiom to express perfect workmanship. This idiom is also used to mean a perfect, comprehensive plan.