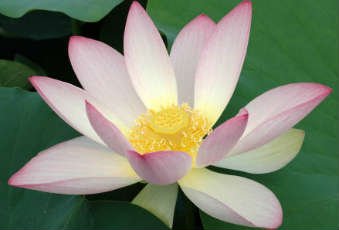 The water lily has almost the same symbolic meaning as the lotus.

It has its roots in the ‘Earth’, its leaves float on the Water layer , its stem then rises up through the Air and its flower opens up like a crown chakra as the Higher Spirit accepts spiritual nourishment from the Sun [the Creator] – see Trinity symbolism.  It is also roughly speaking in the shape of a cross, the sign of the ascent of man and  the cardinal directions in the Egg.